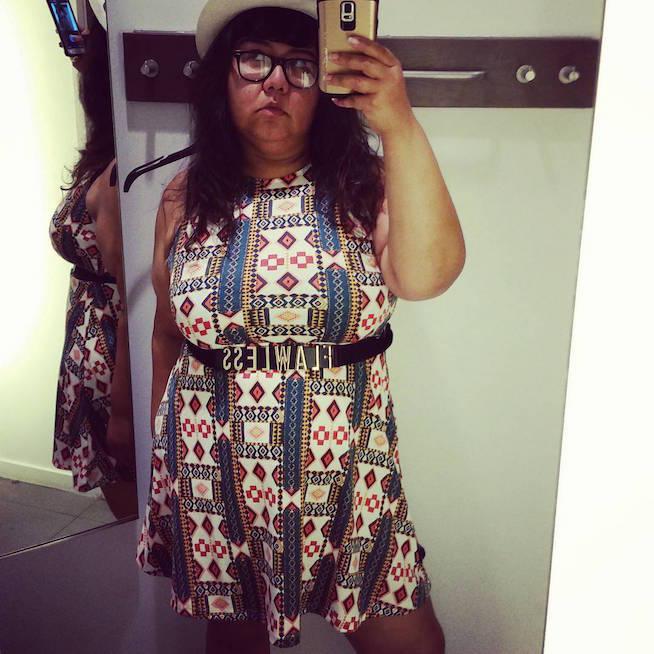 To a person with fewer trust issues (and less experience with being told they’re worthless because of their body size), “a tone” might go utterly unnoticed, may warrant an eye roll, or might even lead to a stifled tear, but nothing earth-shattering. To me, that “tone” merited my storming out of the store, stuffed cart left abandoned mid-aisle (sorry for being that asshole, Michael’s employees!), and my walking (about an hour) home.

I’ve been dating Jacob for almost two years now. Our first year was difficult, punctuated by massive communication blunders. In hindsight, many of them were avoidable, but not in the way you might think. Am I a li'l bit bossy? Yes. Do I require the occasional ginormous pink rhinestone-covered lobster necklace by Betsey Johnson? Yesh. Am I really into processing my feels? Obvz. But he doesn’t have a problem with any of those things. No, our fights were largely about this third entity in our relationship: shame. More specifically, my near-lifetime experience of being told I wasn’t lovable because I’m fat. In this relationship I’ve learned that wanting love is the easy part for me. Feeling like I deserve love? That’s the hard part.

This month marks our two-year anniversary, and the one-year anniversary of the time I stormed out of a Michael’s (yes, the craft store) because he used a “tone” I found disrespectful.

We walked into Michael’s so we could get decorations for his apartment (where I spend most of my time) for Halloween. Decorating and crafting are my thing, and he loves my obsession with turning the living room into a pumpkin patch/harvest celebration/winter wonderland fit for a bunch of paste-eating kindergartners.

The cart was almost overflowing with all my weird supplies and 77%-off felt garlands, lanterns, and face tattoos. Then he got a text from his close friend, someone he doesn’t get to speak to often. He asked if we could leave in the next 15 minutes so he could touch base with him. When I told him it might be a little longer than that, he took on what I would consider “a tone.”

In retrospect, I realize that the tone was likely inspired by a couple of feelings, maybe “Ohmygod, I get that you can’t live without these tombstone cake toppers, but I can’t handle being in Michael’s for another hour!” with a little “I’m frustrated that you don’t care that I want to talk to this person who matters to me.” At the time, however, when he used the tone I heard, “I don’t care about you or your interests. Your time is worthless. I don’t care enough about our relationship to see that decorating my house is an emotional investment that is making you feel vulnerable. Literally anyone is more important than you right now.”

To a person with fewer trust issues (and less experience with being told they’re worthless because of their body size), “a tone” might go utterly unnoticed, may warrant an eye roll, or might even lead to a stifled tear, but nothing earth-shattering. To me, that “tone” merited my storming out of the store, stuffed cart left abandoned mid-aisle (sorry for being that asshole, Michael’s employees!), and my walking (about an hour) home. This, of course, was followed by roughly three hours of processing, him going on a walk, and then us apologizing profusely to one another.

He told me he was surprised that I “expected so little of him,” and honestly I think he was hurt that I didn’t presume that he’d do all these things. What he didn’t know was that it wasn’t my low expectations of him, it was the deep-seated belief that I didn’t deserve to be treated with care and tenderness. Even now it’s hard for me to admit — or believe — that about myself.

Because this is me — the girl who wears fatkinis and skin-tight neon dresses, the babe who takes selfies of herself eating massive donuts, sets damn good boundaries every day, and lectures around the country on the oppressive realities of a diet-obsessed culture.

And honestly, that is me. I’m not faking it, but sometimes these little reflexes and thoughts creep into the way I see the world and I realize I just can’t seem to shake those lessons I learned all those years ago.

It’s only recently that I’ve begun to be able to articulate what was at the heart of so many of our disagreements. In short, we were taught very different lessons about our place in the world.

He’s a white, straight attorney. He grew up being told to be as weird and unique as he wanted to be. He walks through the world with a wellspring of confidence that gets renewed every day by a culture that affirms his existence all the time. If someone says something rude to him, he interprets it as harmless if he hears it at all. He feels naturally endowed with a sense of dignity and humanity.

He walks through the world the way that everyone should be able to walk through the world, but so few do. He feels safe and secure in who he is, hopeful and expectant of other people’s kindness and respect.

I’m a fat brown girl from an immigrant family. I grew up learning that no one would ever love me because I’m fat. I was taught that I have to work twice as hard to get half as much. If someone looks at me weird or says something rude to me, I always see it or hear it and I have a massive (exhausting) anxiety/adrenaline rush/aggro response/comedown cycle. I feel like I have to fight to maintain dignity and humanity every single day.

I dedicate a massive amount of emotional and spiritual resources to the fight to be seen as fully human — and the fight to see myself as fully human. I’ve lost relationships and countless opportunities to be close to people in the name of keeping my world small and manageable. Because that’s what traumatized people do.

I wish no one had ever told me that I was ugly and wrong; undeserving of care and affection. Those are lies, but I believed them because I didn’t think so many people could be wrong about me.

And that’s what’s so sinister about fatphobia (and racism, and sexism, and transphobia, and ableism). Long after the political educations are mastered, the language is on point, and we’ve stopped waking up every morning wishing we were someone, anyone else, it’s the ghosts that remain. That’s the thing about oppression — it creates isolation. Even when we’re ready to be in relationships, we’re often not equipped to actually experience — and accept — intimacy.

Jacob reminds me that love, dignity, and humanity are things that I don’t have to earn, that they are already mine. But I struggle to believe this is true for fat brown girls, and I struggle to trust him.

Now he knows that when I start a fight, it’s because I’m hurt and scared. And now I know that when he uses a tone that I’m not helpless, that I (and we) have the resources to make it better, and as I continue to heal, I will try to make sure that no cart is left behind.

If you like this article, please share it! Your clicks keep us alive!
Tags
intimacy
fat
Body Positive