I'm The Mom Who Lies To The Pediatrician 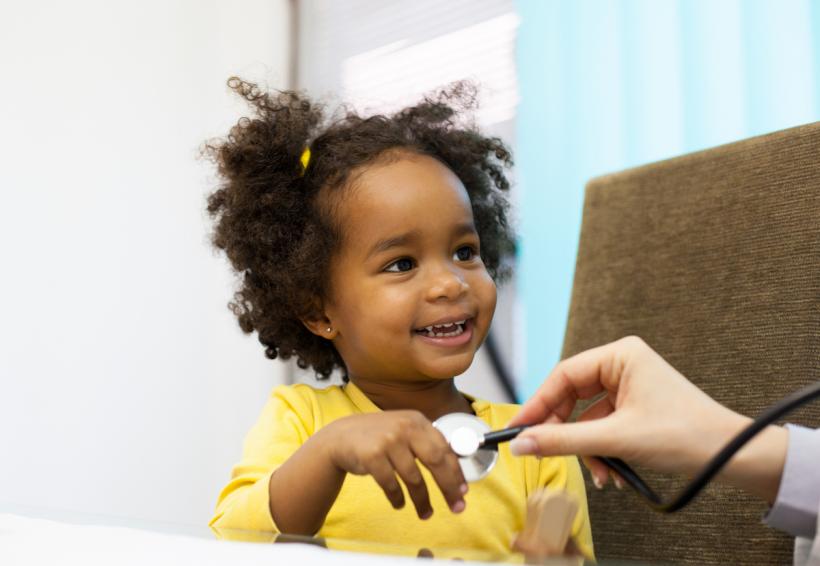 Of COURSE I give her Vitamin D drops...

I know what their pediatrician wants to hear, so I give him the straight-A answers he’s looking for. I go down the list looking like a goddamn supermom.

My pediatrician doesn't grill me much on my parenting habits, but even as he goes down the list of things he is supposed to ask, I find myself lying all the time.

I don’t pause and consider whether or not I should tell the truth, because I’ve been down that road before. It’s a dead end. I lie freely and deliberately, getting us in and out of the doctor’s office before any of my three children lick one of the communal toys riddled with unknown diseases.

I know what their pediatrician wants to hear, so I give him the straight-A answers he’s looking for. I go down the list looking like a goddamn supermom.

I wanted so badly for him to be normal by these arbitrary standards that I bent over backwards to make him fit the definition of what a child his age “should” be.

Trust me, after three kids, I know the script by heart.

I don’t lie to look like a rockstar mom. I couldn't care less about what my kids’ pediatrician thinks of me personally. The truth is, I don't have time for a lecture from my pediatrician about how I shouldn't be co-sleeping or how my kids need to eat more balanced meals. After three kids, I feel informed and confident in the decisions I make as a mother, and going by-the-book isn't something I'm going to fret over at this stage in my life.

When my first child was born, I was constantly looking to his pediatrician for validation that I was doing everything right. I wanted him to hit all his marks perfectly and wanted my mothering record to be spotless. I worried if he made the slightest shift outside the guidelines set forth by his pediatrician. I wanted so badly for him to be normal by these arbitrary standards that I bent over backwards to make him fit the definition of what a child his age “should” be.

I threw out the Baby Einstein DVDs my mother secured for me at a garage sale and only bought developmentally appropriate toys. I talked and sang to him until I felt like a crazy person. I dutifully put him back in his blanket-less crib after each late night feeding — only to wake him and deal with hours of subsequent wailing. I forced rice cereal and homemade baby food on him until I was in tears over how little he ate as he remained in the tenth percentile.

I spent the better part of two years a frazzled mess over things that ultimately didn’t matter.

My child was still growing up perfectly normal, even when he didn’t follow the straight and narrow path set forth by his pediatrician. I was driving myself over the edge for nothing.

By the time my daughter was born, I was starting to feel a bit more confident in my mothering abilities.

I wasn’t looking to my kids’ pediatrician for every single answer. I knew the ropes a little better. I had seen firsthand that even when they didn’t follow the by-the-book rules, they would still live. I left room for a bit more trial and error with her. When she eschewed baby food, I fed her bottles to supplement until she could self-feed. When she refused to follow a “normal” nap schedule, we shifted around until we found what worked for her.

Though I did little to help her stay on the path set forth by my kids’ pediatrician, she grew and thrived in a way my son never did when I tried to force him into a pattern that went against his nature. She was healthy, bright, and happy. I realized that my kids’ differences when it came to sleeping and eating and growing were perfectly fine, and we needed to find what worked best for our family.

Now with my third child I’ve evolved from taking their pediatrician’s advice as the end-all answer to a set of strong suggestions. I understand why it’s easiest for him to follow this strict model of what a healthy childhood should look like, but I also know that my kids will never fit each category perfectly. Our family is unique and our needs vary from person to person. I know their pediatrician would like everyone to fall onto this neat little grid, but I've found that my kids' variations of normal aren't worth losing sleep over.

I don’t do anything that would cause my children harm.

I make sure my decisions are informed and the risks and benefits are weighed. I have made decisions as a mother that go directly against their pediatrician’s advice, like co-sleeping with our third child and watching entirely too much TV. There are other areas where I excel by his standards, like staying away from processed food and giving them early bedtimes.

But for the sake of my sanity, I choose to withhold certain information, because I’d rather not duke it out with their doctor. I know why he offers the advice he does, but I also know what works best for my family. As long as they are healthy and thriving, a white lie at the doctor's office isn't going to hurt anyone.

If you like this article, please share it! Your clicks keep us alive!
Tags
pediatrician
moms
parenting
lying
Children