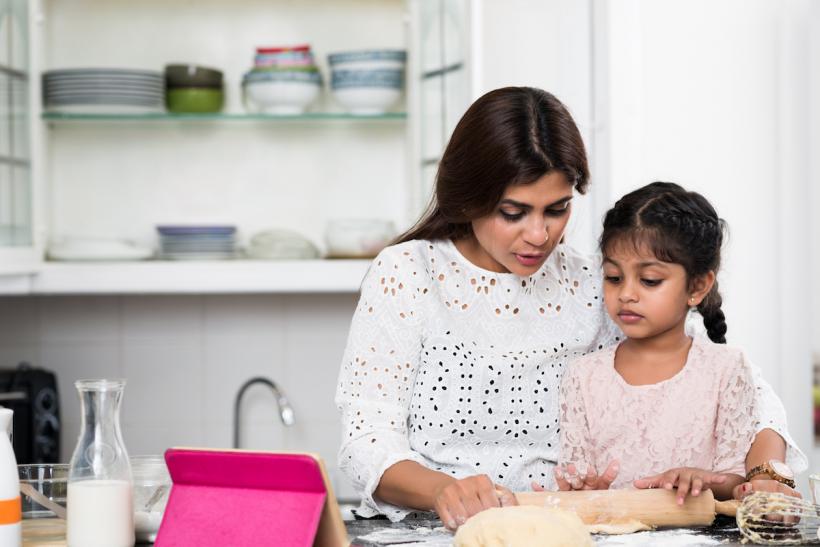 My daughter will be who she will be despite me, not because of me. Image: Thinkstock.

As universal as it is, motherhood is a unique experience: Everyone deals with it differently, and nobody is right or wrong.

My mom was never the “typical” mother. The one thing that stands out from my childhood is that she was never there for me.

Dad ferried me to school and back till I got my own bicycle. He would always be at the parent-teacher meetings. He attended each sporting event, glowed with pride at the graduation ceremonies, and never missed any of my debates or plays.

He was not a stay-at-home-dad. He just made time for me.

In spite of dad's omnipresence, I missed my mom.

Each of my friends could spot my father from a distance, almost as well as they could find their own dads in a crowd. As for mom, they would meet her once every year. On my birthday.

She was the perfect hostess, regaling everyone with cheerful maternal affection, something she only seemed to reserve for others. She played Bingo with my friends. She laid out a delectable course of Pinterest-worthy finger foods that were talked about for months later. She cracked jokes (the not-so-kosher kinds, too).

In short, she was the mom everyone wanted.

But I missed having the boring, stay-at-home-mother all my friends had.

I was the unlucky one.

My mom worked from 9-6 PM, though sometimes as late as 7 or 8 pm. Her title of “assistant branch manager” at a local bank took priority over her role as “mother.”

In every conversation I have with her, I feel judged. She believes she gave me wings by not coddling me; she thinks she set me on a path of independence by being oblivious.

When she got home in the evenings, the air would become electric. She'd quickly take off her sari, put on her housecoat, and start making dinner while prepping the following day's breakfast and lunch. Amidst the chaos of pressure cooker whistles, dishes being washed, and sandwiches being packed, she had no time to hear about my day.

All I remember of mom is a shadow... a blur.

At dinnertime, while mom and dad caught up with each other, I ate quietly.

The last thing she did was kiss me goodnight. A peck on my cheek and a pat on my head to make up for her absence all day.

As I stepped onto the stage to receive the Best Student Award, my eyes searched the auditorium, even though I knew she wouldn't be there.

I saw dad wearing his most expensive navy blazer and sporting his widest grin. He looked fatter, happier.

And just as my lips curved to flash a smile back at him, I saw her!

Mom had come! She had taken a half-day off from office to be part of her only child's moment of glory.

My mom was there!

I introduced her to all my high school teachers. They sang my praises.

She beamed with joy and responded with, “I have no hand in this.”

It seemed congratulatory on the surface, but to me, it represented indifference. Her offhand remark has stayed with me for years. Through college, marriage, and now a kid, I've often thought about how she nonchalantly dismissed her role in my accomplishments.

She didn't slave over my math homework or help with my play rehearsals. She didn't know who my teachers were, or which subjects I loved. She had no clue I got an “F” in math in seventh grade or I won the award for best debater in a state-wide competition.

She was too busy attaining her own career milestones, breaking her own glass ceiling, fighting the stigma that came with having an only child — a girl! — by choice, battling her own guilt in a non-supportive, judgmental, pseudo-modern Indian nuclear family network.

My birth made her a mother, but every title she got in three decades of her professional career, she had earned.

She participated in one of the most monumental days of my high school life but, somehow, it felt forced. It felt unnatural. I felt guilty for having made her take a half-day off. Her presence felt confusing.

I am beginning to tell myself every night as I nurse my little one to sleep that my daughter will be who she will be despite me, not because of me.

Despite having spent enough quality time as an adult with her, somehow I haven't been able to shake off that feeling of always being secondary.

I've had conversations with her in recent years about what motherhood means to me and what it meant to her when I was little, and I see the disparity in our point of views.

Where I take immense pride and joy in being a stay-at-home mom, she sees failure. Where I see my nurturing, comforting, educating, and loving my toddler as natural maternal instincts, she views them as obligatory responsibilities — something a nanny could do just as easily and efficiently. Where I spend my time learning about life, love and myself, from my little one, she sees career opportunities flying by.

She hasn't been shy about expressing her disappointment in me, in my choice to let my master's degree go waste, my career path be squashed.

In every conversation I have with her, I feel judged.

She believes she gave me wings by not coddling me. She thinks she set me on a path of independence by being oblivious. She is certain I achieved professional heights because she was a role model.

To say she had nothing to do with how I turned out would be incorrect: She taught me resilience, self worth, and independence. To give her credit for my personal growth and professional acclaim would be false. She never encouraged me to be a writer — my writing was, and always will be, a hobby to her.

To blame her for all parts of me that are broken wouldn't be kind.

She isn't responsible for who I am today. That said, on a subconscious level, I am the mother I am because of the mother I had.

I'm realizing that, as universal as it is, motherhood is a unique experience: Everyone deals with it differently, and nobody is right or wrong. She did the best she could.

I am beginning to tell myself every night as I nurse my little one to sleep that my daughter will be who she will be despite me, not because of me. She'll have her own story to tell, her own journey to undertake, her own grievances against me, her own choices to make.

All I can do, is try to be there for her. To hold her, to love her, to encourage her.

To accept her for who she is, and in the process, remind myself that there is no Holy Grail of parenting.

If you like this article, please share it! Your clicks keep us alive!
Tags
motherhood
career
parenting
stay at home mom
stay at home parent
Indian families

My Post-Pregnancy Body Doesn't Feel Like It's Mine Anymore
Vedavati M.

I Chose To Have A C-Section, And It Was Totally Fine
Vedavati M.

I Don't Think Parenting Is Miserable — I Actually Love It!
Vedavati M.

In Praise Of The Only Child
Vedavati M.