3 Reasons I Refuse To Hide My Feelings From My Daughters 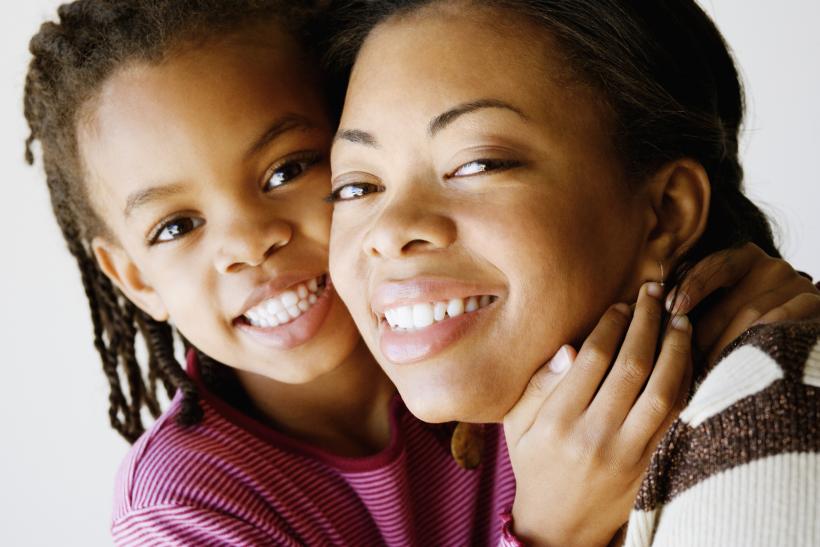 At 12 and 10 years old, my girls are still in the age range where society tells me that I should be presenting a polished version of myself to them. Image: Thinkstock.

In a recent podcast interview, acclaimed “bad feminist” Roxane Gay addressed the intersection of identities and how that connects to representation and progress in the feminist movement.

She said, “I don’t keep my identities in compartments. I am everything I am all at once.”

I have this conversation in relation to Blackness often, because it is central to my identity and it informs the lens I bring to life. I am many things at the same time: Black, woman, immigrant, wife, daughter, sister, ally, writer, feminist, mother.

That last identity — mother — brings up a less-discussed issue when it comes to multiple identities: the intersection of personhood and motherhood.

I am somebody who became somebody’s mother.

My personhood, my rights, choices, and actions, are now linked, rather inextricably, to that of two other people, my daughters.

But all of those aspects of who I am sometimes cause friction in my life.

Sometimes it feels like I’m not allowed to be multiple things at one time, and the disallowing party — surprising as it may sound — is sometimes my children.

A couple weeks ago, I asked my daughters to do something. They said yes, but nearly 30 minutes later, it still wasn’t done. I reminded them, gave them space, then checked back again 20 minutes later to find the task still not done.

I talked to them about it, expressing my concerns, and listening to hear if there were any objections or things I hadn’t considered. One daughter was apologetic; the other was dismissive. She was curt and apathetic, and it boiled my freakin’ blood.

At 12 and 10 years old, my girls are still in the age range where society tells me that I should be presenting a polished version of myself to them. This version can get upset, but not so upset that she shows it.

This version models appropriate behavior at all costs, and she does so with grace, as any good mother would do. This version is irrationally patient. The only other option is to lose her shit, and maybe even inflict physical punishment on her unruly child.

Well, violence is never the best answer, but for me, patience isn’t always the right answer, either.

Sometimes my daughters need to see me in my impatient space. Sometimes I can’t plead for their understanding — I have to inspire that shit through raw emotion and honest, unfiltered, non-violent expression. That’s my truth.

The reality is that any person I love, including my daughters, can deeply hurt my feelings.

Does this mean that I hold my daughters to the same level of emotional accountability as my husband or my best friend? Nope, but it for damn sure doesn’t mean that I morph into some feeling-less version of myself because I’m a mother, either.

I refuse to hold myself accountable to some ridiculous standard of motherhood, and I refuse to see my daughters as people devoid of the capacity to use feelings and logic to decide how they want to be.

They are not empty buckets made of impulses and giggles. As such, I hold them accountable, and I show them real-life responses to their real-life choices.

As a matter of fact, I told three things to my dismissive daughter that day — not exactly in these words, but very much so in this energy:

1. Being your mother doesn’t make my human feelings magically disappear.

If I feel disregarded, that affects my actions, and the fact that you once lived in my womb doesn’t change that reality one bit.

2. You are not responsible for my feelings, but you certainly influence them.

3. Feel free to look at me like I’ve sprouted another head when I lose my shit, but don’t expect me to always take the high road.

I make it a point to express myself and to consistently remind you of your right to express yourself too.

We speak openly and honestly in this house, and when I raise my voice or walk out of a room, I’m not concerned with whatever that models for you in the moment.

My feminism is inclusive of culture and color and confident autonomy. In my feminism, all people, including children and their mamas, get to explore and express themselves freely.

Why? Because I am a person first, and your mother second. I prioritize your full liberation and emotional wellness — I even hold myself responsible for it — but not at the expense of myself.

I know that you understand what this means, because when we’re in a good space (emotionally) we talk about reactions (yours and mine) versus responses, and I make space for you to feel your feelings out loud too.

I value you and respect you, and I expect that same thing back. I won’t always get this parenting thing right, and there’s no right or wrong way for you to be my daughter, either. But as we continue to grow together and learn what each of needs in order to feel loved and respected, let’s try not to put position (mother and daughter) over our shared humanity and feelings.

I’m not always going to exhibit the best example of how to respond when my feelings get hurt.

I know I influence my daughters’ perspectives, but I’m nobody’s perfect role model. Trying to be that would be irrational, and those efforts would be rooted in a bullshit expectation perpetuated by the pervasive influence of religious ideologies around morality and behavior.

These notions see women as comfort and company for men and selfless nurturers of babies. Well, I am not always comforting, and I am not interested in neglecting myself.

Don’t get me wrong: this is not a blame-game piece about my daughters’ actions causing me to lose my shit and raise my voice.

Instead, this is me saying that parents get to be imperfect. Not violent or emotionally abusive, but human.

And we get to speak up on our own behalf, especially to the people we love most.

Like most parents, I want to be good to my daughters. I prioritize their wellness and their liberation. I do my best not to weigh them down with my ideas of who they should be, and I don’t think their job is to behave, and to make sense to me.

But I also don’t think my job is to fit my feelings into a boxed-in idea of motherhood.

All of that is feminism to me, and my feminism is inclusive of culture and color and confident autonomy. In my feminism, all people, including children and their mamas, get to explore and express themselves freely.

In my feminism, perspectives and personalities aren’t confined to boxes.

As long as we’re not comprising anyone else’s safety, all of our aspects get room to roam.