On Killing And Replacing My Kid's Fish 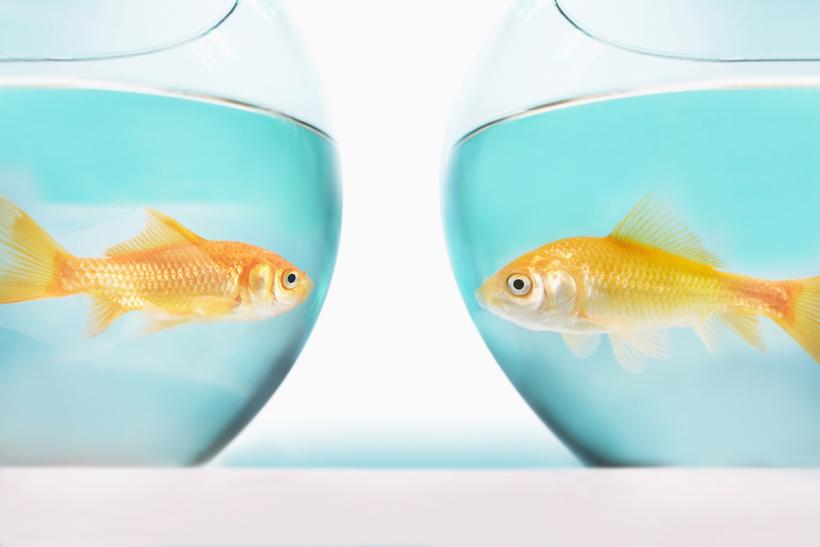 I went to the pet store, peered into some glass bowls, found a reasonable facsimile of the original fish, and voila: Boonga Two-nga. Image: Thinkstock.

I have the air conditioner on for a fish.

See, the last two died, and my working theory is that maybe they overheated in the 90-degree Brooklyn weather? Which doesn’t really make sense, because they’re tropical fish, but what I read online said “sudden temperature changes” could cause a betta death. Other possible culprits are overfeeding, shady fish store practices, mysterious fish bacteria, and coincidence.

Despite the headline, I am hoping that I am not a fish-killer.

The first fish we had lived for a year and a half, which is a little short of betta life expectancy, but gives me some confidence in my fish-rearing abilities.

My son named him “Boonga Boonga,” which I didn’t realize at the time was very close to the name of a wild French sex party. We went to the pet store and my then-3 year old picked out kind of a raggedy-looking betta fish with a scraggly, chewed-up tail.

He was a nice enough fish, but after the initial novelty wore off, I sort of felt like he was looking in my soul every time I fed him, working his gaping fish mouth as if mouthing, Whhhhhhy am I aliiiiiive? (Boonga Boonga may have experienced some trauma.)

But despite the fact that a fish is kind of useless pet, and my son definitely lost interest over time, I was surprisingly sad the day I found him floating on his side near the top of the tank.

It turned out that, somewhere along the way, I had bonded with Boonga, my depressive nature perhaps allowing me to understand his deep spiritual malaise.

But there was no time for grieving, because I had a decision to make. My son was out of town and wouldn’t be back for days. Should I quietly replace the fish with a similar-looking fish, or did we have to have a serious talk about fish death?

It seemed like everyone I asked had extremely strong opinions in direct opposition to one another. “You have to tell him. You need him to know that everything you tell him is the truth,” said one friend.

(When I say “friend,” assume I mean people on Twitter.)

“He's so little; replace it. If he wasn't out of town, I'd say truth-talk him, but it'll be scary to come back to [an] empty bowl!” weighed in another.

Background: My son is particularly anxious about death.

He’s generally sensitive — he’s yet to make it through a full movie, because anytime there’s a minor conflict he gets too upset and we have to turn it off.

We left Zootopia in the theater when the big animals were being “too mean” to the rabbit. We left a screening of Toy Story in the park because he got too anxious when Woody and Buzz got left at the gas station. (We didn’t make it to the genuinely terrifying broken toy hybrids.)

One day he told me that he was scared about starting kindergarten, and when I asked why, he said, “Because you get higher and higher and then in a long time you die.”

More background: This was the week that Philando Castile and Alton Sterling were murdered by police and the videos were made available online.

I had watched them both. My son is Black and I’m a human being, so I was in a pretty bad mental state. The whole world was terrible and our fish was dead.

Ultimately I was swayed by the wise words of a Twitter friend dealing with similar feelings: “I'm one of those Don't-lie-to-children types, but... I might just quietly replace lil' homie this one time.”

So I went to the pet store, peered into some glass bowls, found a reasonable facsimile of the original fish, and voila: Boonga Two-nga.

It was evident immediately that there were vast personalities differences between the two fish.

Twonga was energetic, swimming and darting all over his new tank. He seemed genuinely happy to have been placed in a tank in a child’s bedroom.

At first I found his enthusiasm annoying, and inconveniently unlike the original Boonga. He spent a lot of time chilling in the little plastic castle, which Boonga Boonga never did, so I was sure my son would notice the difference immediately.

Luckily, my subterfuge went undetected. And I found myself spending long stretches of time peering into the tank, watching Twonga. He would swim up to the side and wait for me to feed him when I walked in. I began to realize that Boonga One may have had serious clinical issues.

I decided new Boonga’s secret real name was Fred. I started to like him.

Then one day, not even two weeks after he came to live with us, he went into his little plastic castle and never came out.

I actually grieved. The sum total of two fish deaths in as many weeks, combined with the fear of my own culpability, resulted in genuine tears. I was sad about fish. I had loved fish.

And while I know I probably should have taken death #2 as a sign to give it up and level with my kid, I… just couldn’t. While the first time I’d made the decision for the sake of my son, this time I had to admit that it was me who just couldn’t handle a fish death right now.

So I spent 50 dollars on a third damn fish, plus new rocks and plants and a new castle. (I just couldn’t look at the old one after Boonga Two expired in there.) As before, I scrubbed the whole tank and replaced everything.

This fish looks even less like the original Boonga, but my son hasn’t noticed. (I sincerely hope that future Google doesn’t serve this article up to him when he’s old enough to read.)

I still don’t know what caused the other bettas to die, so I’m being extra-cautious.

I bought special rocks with live fish bacteria and an “anti-stress” tank fluid. I stopped using the tank’s internal light bulb because I was scared it was getting too hot in combination with the hot weather. And I leave the air conditioner running lightly in my son’s room when the temperature gets high during the day.

Boonga New-gna is, well... He likes to swim up to the edge of the filter, throw himself in front of it, and let the force propel him across the tank. He’s practically going Wheeeee! This latest fish is the fish manifestation of Kevin from Ghostbusters. I’m trying not to love him, but I probably do.

I’ve told myself that if a third fish dies, I’ll face the music and tell my son. Especially since it would probably be evidence that I’m unfit to be a fish owner.

But I sincerely hope I don’t have to make that decision anytime soon.

I replaced my son’s dead pet twice, and maybe I’m a bad mom, but I guess I don’t care.

The world is terrible and our fish is alive.

If you like this article, please share it! Your clicks keep us alive!
Tags
parenting
fish
death
loss
personality
Kids
Children
violence
black son
white parent of a black child(ren)