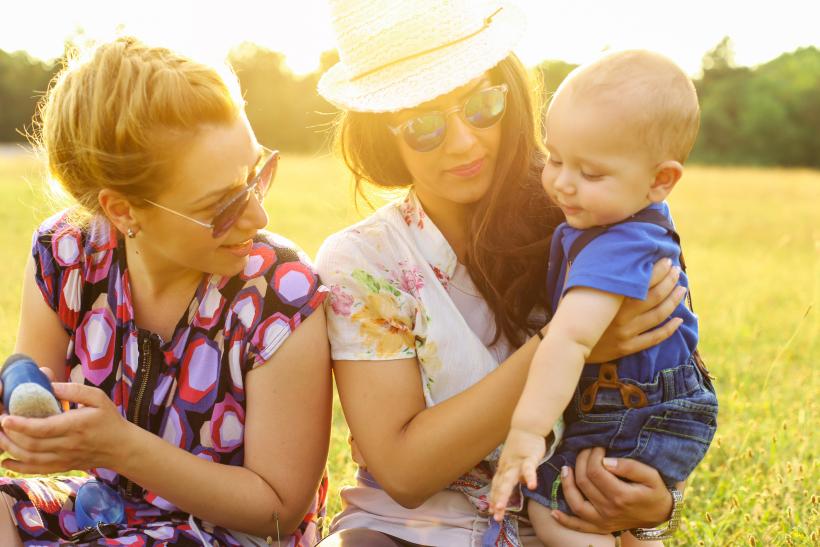 In two days, I am taking my 1 year old on a road trip, and camping with him in the middle of Indiana to listen to a bunch of weird punk bands and hang out with a thousand strangers. Image: Thinkstock.

Last year, after a hard pregnancy and a truly hellish labor, I gave birth to a beautiful infant, and my partner and I became parents. We had wanted him for quite some time, and we were thrilled to welcome him into the world.

We also swore that we wouldn’t lose our self-identity — the cool and interesting people we had been before we had a kid — to the world of parenting.

It turns out, that’s easier said than done.

And so, without ever intending to do so, and despite being as queer and weird as the day is long, we find ourselves on parenting autopilot a lot of the time. We focus on making it through each day, and then wonder where our lives went.

How long has it been since we’ve gone to a show? Or gone to a dance party? Or been spontaneous?

Which is why, when tickets went on sale for a DIY punk music festival that my wife had attended several times before we were married, and she lamented that there was “just no way” that she’d be able to go, a light bulb went off in my head.

“What if we just all went together?” I said.

“What, like…” Her eyes looked off to the side, the way they do when she’s thinking about something. “All three of us?” Her mouth was curving into a tiny smile.

“Sure, why not?” I said. “We wanted to take him camping this year anyway. What’s the difference? And anyway, we said that part of the reason we wanted to have a kid was to share the things we love about the world with him.”

We had a few brief conversations about logistics, and then we decided to just go for it.

We realized it was impossible to plan for everything months and months ahead of time, because babies change so fast, and we couldn’t know where our kid would be developmentally by the time of the fest.

And we had so much else going on. We were trying to move; we were so busy.

We would have plenty of time to work out the specifics.

It was exciting and exhilarating. We were going to be the kind of punk-rock parents we had always dreamed of, after all!

We both felt (even though we tried not to talk about it) that we had missed out on so much, but we weren’t going to miss this!

That's not to say I didn't have concerns.

I had three of them, to be precise:

1. “The baby will be whiny the whole time and everyone will hate us for bringing a whiny baby and I will be barred for all of time from hanging out with anyone cool or interesting.”

This is definitely fear number one for me! It turns out that all of that time that I put into cultivating an image of not caring whether or not people like me? Yeah, I did that because I want people to like me.

There are definitely folks in the punk scene who are all about being intergenerational, and as a movement it often tries to be radically inclusive. If the event is “all ages,” why not a 1 year old?

We did actually check ahead on it, and got a somewhat mixed response that amounted to “you can bring him if you think he can handle it.”

Fair, but not exactly encouraging.

Will I be ousted from punk for this? And what does it say if I am?

2. “None of us will ever get to sleep for three whole days and it will be the saddest thing ever.”

The child pretty much decided at the age of eight months that co-sleeping wasn’t really for him anymore. Now he sleeps great in his crib, and everyone is more or less happy with the arrangement.

But we’re going to be camping.

We’re going to be camping in a tent.

3. “I will be way too shy to talk to anyone and will use the baby as an excuse to not even try and basically just hide the entire time.”

It seems like something that could happen to me. Also this would conclusively prove that I am the boring mom that I don’t want to be.

Bring on the mom jeans and the mom hair, we’re going to mom town!

For me, one of the most satisfying and joyous things is when I have a plan, and I get to see that plan carried out more or less the way that I envisioned it. It scarcely needs to be said that babies and toddlers are pretty averse to that — and so is punk rock.

Life with a baby is unbelievably busy. It’s busy in a way that I never could have even pictured before I became a parent.

And that’s how it happened that I realized that the fest was a week away, I had no idea where our tent was, and didn’t really have a concrete plan for how all of this was going to go down.

It turned out our tent was in my mother’s garage (what, why would that be? Oh well…) but other questions, such as food and transportation, lingered.

Anyone who knows me well, is, at this point, gasping.

I pretty much identify as being uptight. It isn’t that I’m judgmental or require that everyone fit into my version of “normal,” it’s more that I am just profoundly incapable of flying by the seat of my pants.

For me, one of the most satisfying and joyous things is when I have a plan, and I get to see that plan carried out more or less the way that I envisioned it.

It scarcely needs to be said that babies and toddlers are pretty averse to that — and so is punk rock.

I spent the week before the fest scrambling to put together some sort of cohesive plan. We secured a vehicle (we do not own a car) and our tent was returned to us. I purchased food and actual shoes for the child.

I had every intention of catching up on work stuff and sleep and also dying my hair.

It was going to work — and I was starting to get excited.

In two days, I am taking my 1 year old on a road trip, and camping with him in the middle of Indiana to listen to a bunch of weird punk bands and hang out with a thousand strangers.

This is going to work… Right?