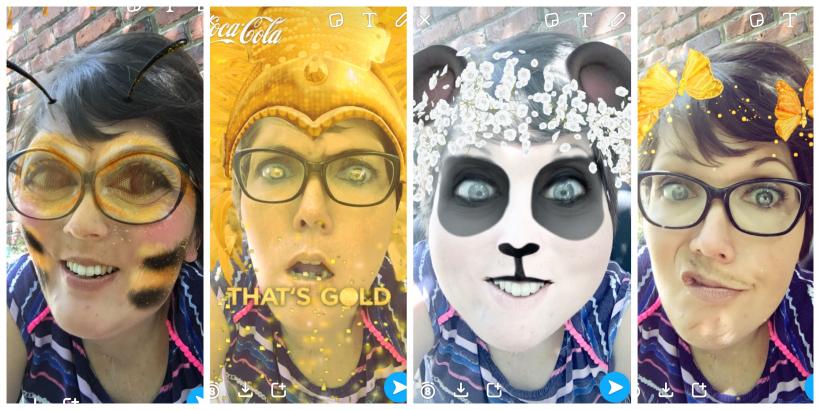 "After five minutes of show-and-tell instructions, some changes to my settings, and a little strategic screen-tapping, I was enlightened to the possibilities." Image: author

Having been born in 1982, I qualify as a member of the millennial generation, but just by a hair. Often, I feel like an old lady, sometimes the last to catch on to the fads claimed by this group — and when I do, I fall hard. (I’m looking at you, leggings-as-pants.)

I'm 33 and just a week ago figured out Snapchat. I feel as victorious in this feat as if I had mastered speaking Mandarin.

I'm not completely technologically useless: in fact, I have a day job where I manage social media, so my instance to resist Snapchat makes zero sense. When speaking at a middle-school career day presentation (I'm such an adult, right?), there were audible gasps when I admitted I didn't really use this eight-second app.

To me, I couldn't wrap my mind around a medium seemingly centered on the disposable nature of images. I mean, I invested a great deal of time being on my high school yearbook staff, making scrapbooks and spending more than I care to admit at one-hour Fotomats.

In the words of Melissa Joan Hart in Can’t Hardly Wait, “THESE ARE MEMORIES FROZEN IN TIME, PEOPLE.”

Despite my initial opposition, and insistence that it was just a breeding ground for sneak-attack dick pics and girls who needed constant affirmation, I joined about a year ago, but couldn’t wrap my mind around it. Snaps would pile in from friends and maybe I would reply with a stupefied selfie or a picture of my hand giving them a thumbs up — the very basics of Snapchat 101.

The app became pushed into the “other” folder on my iOS because the whole ordeal seemed intimidating and just a reminder of how not-hip I was becoming as I got older.

Maybe this social network was not made for people over 30. How do I turn myself into a dog with a long tongue or a humanoid strawberry? As far as I could figure, dark magic was afoot.

You mean I can make day-long narratives on here? I can take pointless videos where I face swap with a magazine cover of Benedict Cumberbatch? Snapchat, clearly I have misjudged you. You’re amazing.

Desperation and fear that I had lost my mind snuck in and I soon found myself Googling, "How do I add filters on Snapchat?"

That's another sign that I am an old millennial, because at least 80% of my Google queries are "Ask Jeeves" style in fully formed questions... as if someone cares about my articulate nature.

(In case you haven't noticed, the Internet is not interested in grammar or syntax.)

I soon turned to my focus group of youths, my interns at work, to offer me a one-on-one tutorial. After mustering up the courage to admit my cluelessness in front of people more than 10 years my junior, I asked for help.

For the record, nothing will make you feel more geriatric than asking for tech help from a younger person. It’s humiliating. However, after five minutes of show-and-tell instructions, some changes to my settings, and a little strategic screen-tapping, I was enlightened to the possibilities.

You mean I can make day-long narratives on here? I can take pointless videos where I face swap with a magazine cover of Benedict Cumberbatch? Snapchat, clearly I have misjudged you. You’re amazing.

Author's note: Of course, by the time this goes to press, my understanding of cutting-edge applications is almost obsolete. Now I need to figure out the newest addition to the overshare generation's arsenal: Instagram Stories.

Being an old millennial is the worst — or, as my younger peers would say, “The struggle is real.”

If you like this article, please share it! Your clicks keep us alive!
Tags
internet
social media
Snapchat
App
millennial
age
30s
generation