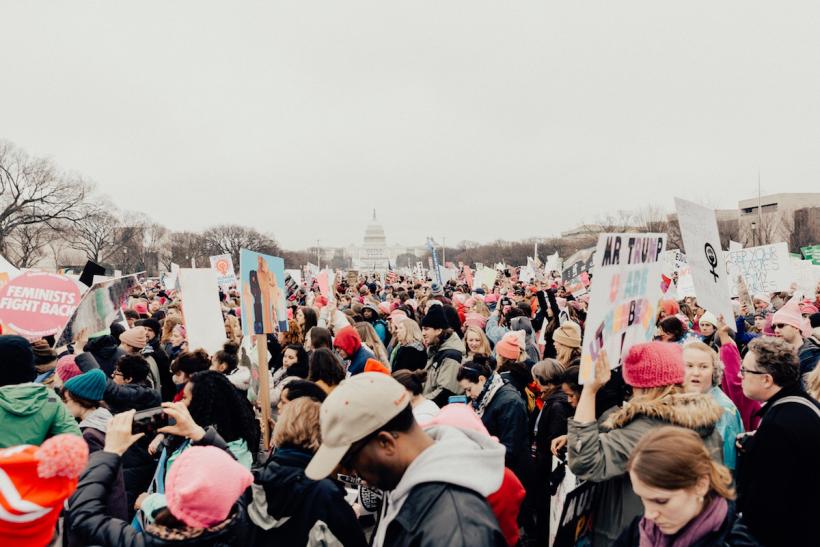 As a generally liberal writer/blogger, there are a lot of "accessories" that seem to come standard issue. Chunky framed glasses, quirky personality, and a raging sense of feminism. It's as if there is a growing sect of Zooey Deschannels taking on the Internet with their "girl power" enamel pins, one pointed snark piece at a time. Admittedly, I'm not too far off that stereotype: my glasses game is strong and I am unabashedly a goofball. But the feminist part is one I wrestled with in 2016.

Am I a feminist?

I know in the 21st century, this is a shocking statement coming from an open-minded, pro-choice female who just read a Lindy West book, religiously laughs at Reductress, and isn't super interested in being a domestic goddess or churning butter and making candles all day. (Not that I judge those who do. Pioneer women were hardcore!) But this issue is one I have struggled with for years.

To put it simply: labels are intimidating and carry with them a host of weird connotations and subtext that I can’t always sign off on. Why is that? Is the admission of this making me sound like an awful person?

Ugh. I know. I know. I can hear the groans seething through the binary code of the interweb. Saying you don't like labels has "Girl, you wish you never started talking to at a party" written all over it. I hear ya, so let me explain my thought process.

I am a southern female with a disability — trust me, I'm all-too-acquainted with being boxed in to wrong assumptions and having more labels slapped on me than an overseas delivery package. It's not a fun space to reside in. Sure, deciding to not assume a label makes me seem wishy-washy, but I choose to think that it makes me fluid in decision making and taking situations on a case-to-case basis. Is it bad to say I grow weary of having to advocate and prove myself 24/7 amid this flurry of labels?

I know that I will never waver on my supposition that typical gender roles are frustrating and that women often get shat on in situations and their rights overlooked, so why am I holding off from using the “F” word to identify me.

Why am I so scared?

In my adult life, I have seen feminism occasionally used in ways that distracted from the overarching idea of equality, and sometimes skew towards militant man-hating in its most extremist forms. Even though I know this is not the norm, it’s an odd stereotype I know exists. It's not something I even mentioned to many people, because in my head, I knew saying, "I don't know 100% if I'm a feminist" reads very 1950's housewife. And I although I love the aesthetic, I don't love the mindset.

Without question, the sole event that made me go from certainty to uncertainty back to certainty again was the cacophony of Absurd & WTF known as the 2016 presidential election. The election and the months leading up to it made me vacillate so back and forth on whether I was a feminist that I probably still need some heavy chiropractic intervention from the whiplash.

Let me start off by saying (not that it's anyone's business) — of course, I voted for Hillary Clinton. I don’t buy into everything she was selling, but I respect her experience and poise a great deal, and for me, she was the best option.

Did I vote for her in the primary? Nope. Was it because she was a woman? Absolutely not. I just preferred Bernie and felt good about his messaging and vision for the country. It had nothing to do with his possession of a penis. (In fact, I'd kind of like to erase the imagery of Bernie Sander's penis from my mind. Can we all agree to do that?) It’s sad that I even have to say that.

I follow politics closely and like to think my decisions are well thought-out. The backlash against Bernie supporters by some proudly toting the feminist flag sometimes grew exhausting. Sometimes I got the vibe that if you weren’t “with HER” from day one, it meant I was against females as a whole.

There were moments when I even resented Gloria Steinem (I know. Blasphemy.) for stating in an interview with Bill Maher that Bernie voters were voting that way to impress boys.

I. Was. Outraged. This archaic way of thinking kind of took out the concept of "equal playing field" and made me want to salvage the burned bits of bra and strap it back on. Even though she later explained and apologized for the offhanded comment, I still felt in my heart that the mama of this moniker had let me down.

I think there was even a moment when she used the adage mangled by Taylor Swift —  “There is a special place in hell for women who don’t support other women.”

In my life, I am lucky to be surrounded by some amazing women that stun me in the field of general badassery, but I don't think you should support someone simply based on their genitals. It should be on their content of character. Is that Pollyanna? Maybe. But it's true. It just seems humanist to me.

Yes. I love seeing a strong woman and like to think I am one, but there are a lot of women I just can’t rally behind...just exactly like there are a lot of men in that boat. There are awful girls that think it's fun to pretend to be stupid, there are women who are serial killers or baby thieves. I know that's quite a spectrum, but should I have to support everyone and their motives? Being a douche bag is not contingent on your gender.

The situation that snapped me back into beast mode was the now infamous “Grab ‘em by the pussy” audio leak. It wasn’t the word "pussy" that I cared about it (because honestly, as a daughter of a sailor…. I LOVE salty language). I was disgusted rather by the implication that male privilege and power means you can just go groping any lady you fancy. And sure, people say inappropriate things all the time (ME INCLUDED), but if I want to lead the country, I fully expect to be taken to task on those matters. All that feminism I had just washed myself of was now swaddling me like a warm blanket as I raged against the misogyny.

One would hope this anger would be the human response and not contained in just women. I would feel the same way if the roles were reversed. Let’s say a powerful woman like Oprah wanted to objectify a man and say, “If I wanted to I could grab that guy by the junk and no one would say anything because I’m Oprah MF’er!!” (Doesn’t that just sound like her?) I would think, “Whoa O, pump your brakes. Show some respect for the other human."

The double standards were becoming obvious to me, yet I was still showing some restraint to buying a feminist back patch and ironing it on my jean jacket.

The other day, I admitted this struggle surrounded by friends. "I just don't want to box myself into being a feminist because I get really irritated by how some misrepresent the message.” And my friend Rae very simply stated, "Just do what you’re doing and that's what feminism will look like to people."

It clicked in a different way.

Why was I forever letting a part turn me against the whole? With that twisted rationale, all #BlackLivesMatter protestors are violent, all Muslims are terrorists or all Christians are hate-filled towards gay people. All these assessments are bullshit. I would get irate if someone made an ignorant blanket statement like that, yet I was, in my wishy-washy way, falling for the very same rhetoric.

It’s just not rational that I’m always going to agree 100% with the tactics of certain feminists or the way they channel their expression, but I believe in progress and equality. Double standards exist. I acknowledge the need for change (especially in the current political climate)… just not at the cost of suppressing others or turning against humanity as a priority.

So. I guess I am a feminist.

If you like this article, please share it! Your clicks keep us alive!
Tags
feminist
feminism
Bernie
Politics
Hillary Clinton