Why Being A 'Working Mom' Works For Me 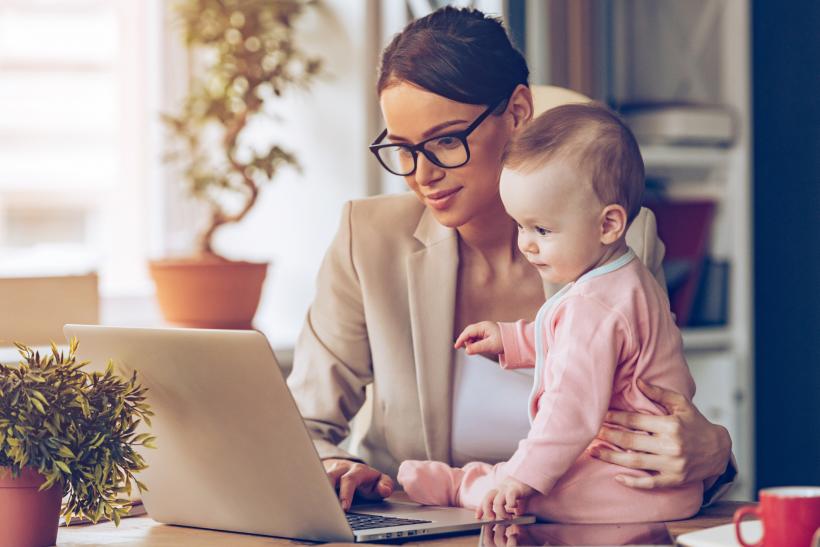 When I made the decision to become a stay-at-home mother, the choice was an easy one. The job I was leaving behind was that of a lower-level retail manager. The pay was mediocre, the hours unpredictable, and my potential for advancement practically nonexistent.

It was just a job to help pay my way through college, and now college was over. It would have been time to move on, even if I hadn’t birthed a baby on the heels of graduation.

While I knew I would never regret my choice, staying at home wasn’t exactly what I expected it to be. Motherhood was a busy job, but when asked, what I did all day, I was at a loss to come up with a good answer. The small tasks of raising babies easily added up to more than I could do in a day, but none of the million jobs I performed as a stay-at-home mother seemed noteworthy in conversation.

“What have you been up to lately?” became a phrase I dreaded like the plague. My answer never changed. I was staying at home with my kids; what else could I be up to? I no longer had something I did for a living. I merely had things I did to stay alive.

By quitting my job and having kids before I ever stepped into a passionate career, I felt like I had skipped over a vital step in adulthood. I had lost a part of my identity by leaving the workforce, and though my new "job" as a mother was invaluable, the question of my worth still hung heavy around my neck. My husband was now the sole breadwinner, and I was literally barefoot and pregnant in the kitchen.

Even though I loved being a mother, and found it fulfilling, I often felt as if my lifestyle was worth less than that of my childless, working counterparts. There was no paycheck or promotion or pat on the back to validate my exhausting efforts. Although, I could tell myself all day long that the work I was doing was vital to society — it didn't feel like it.

Allowing my whole identity to be wrapped up in motherhood was not enough for me. So instead of quitting my freelance work, I pushed myself to succeed in it, for myself and for my children.

I was raising the next generation of humans. I was teaching them literally everything about the world, from wiping their own butts to their existential questions about death. Still, I was plagued by the idea that what I was doing was not enough, because it wasn’t, at least not for me.

I craved an outlet to put my writing degree to good use. I wanted to be a writer. I wanted to make a living doing work I was skilled at. I wanted to feel like I had some financial independence. I wanted that part of my identity back.

I eventually started freelancing to pay for my son's preschool, but dipping my toe back into the waters of the working world was more addictive than I anticipated. I was finally doing work that had visible value, and it sparked an insatiable desire for more recognition. I needed to prove my worth — not only to others, but to myself. Working and mothering was difficult, but it was also fulfilling in a way I had never experienced before in my life.

However, it wasn’t long until the thrill of freelancing wore off, and the hustle started to wear on me. It was difficult to put so much extra work on top of taking care of my family. I felt like I was scraping at all ends trying to pull together the hours of a part-time job to devote to writing. There were times when I wanted to quit, and the fact that I knew we could probably go back to tightening our budget and living without my income made it all the more tempting. There were days when I wanted to go back to telling myself that being a mother was enough.

But I couldn’t do the same for myself.

Because I knew, in my heart, I'd be doing myself a disservice. Allowing my whole identity to be wrapped up in motherhood wasn’t enough for me. So instead of quitting my freelance work, I pushed myself to succeed in it, for myself and for my children.

I worked through the hard moments of parenting, when the kids were screaming at each other all day and I felt like I would never have enough sleep to feel like a fully functioning human. I worked even when my words felt uninspired and I wanted to give up for good. And I’m glad I did.

My hard work may never pay off as six-figure career, or even a steady and reliable source of income, but it will always give me a sense of purpose. It will allow my children to see a mother who is living out her passion, even when it is hard. Because that is the kind of woman I want to be, for me and for them.

If you like this article, please share it! Your clicks keep us alive!
Tags
working moms
WAHMS
parenting
Work Life
Mothers who work