Weight Watchers Is Back With New Nonsense

Weight Watchers Australia is launching a new marketing plan called “Weight Watchers Black.” From what I can find on their website, this program was created by co-opting the language of Size Acceptance Activists, in order to sell a weight loss program that is completely ineffective based on their own numbers (but at least it’s expensive!)

Here is an excerpt from a video that currently on the front page:

As part of this campaign, Weight Watchers sent a promotional mailing to reporters that included a mood lightbulb and text that read: 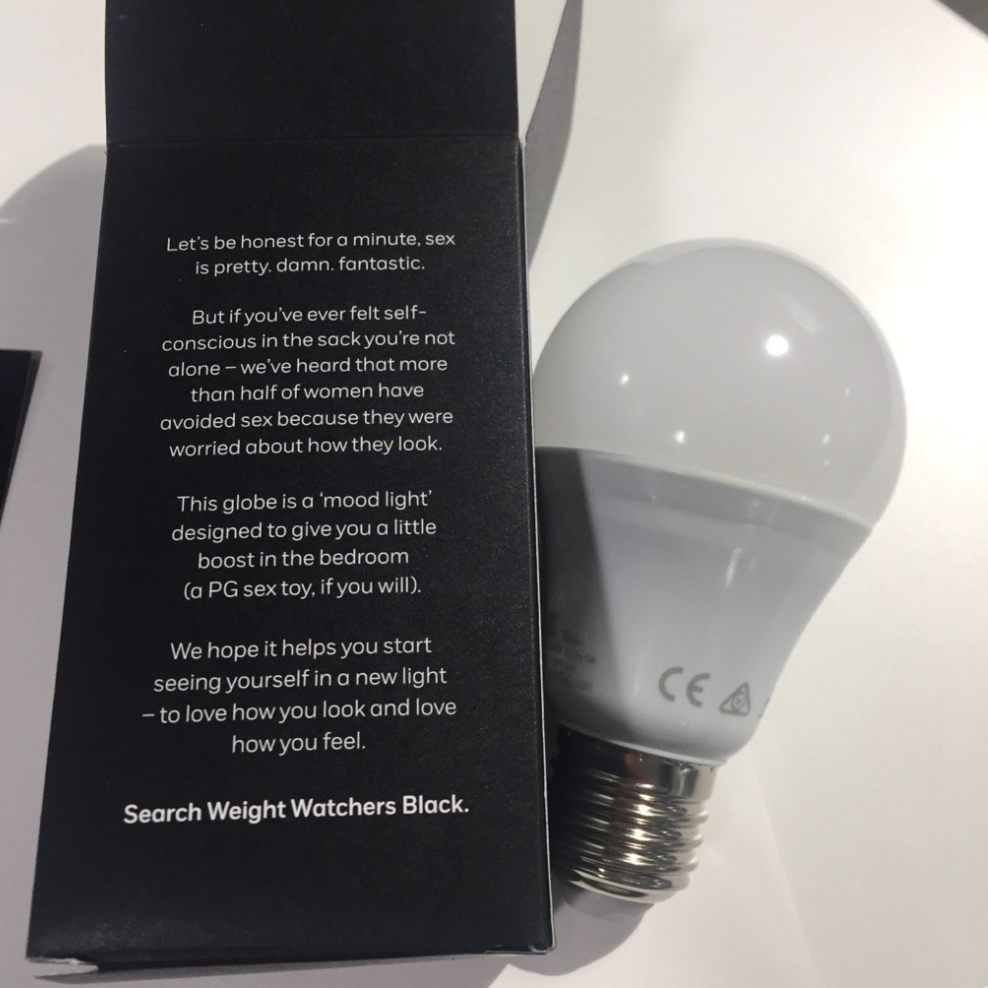 "Let’s be honest for a minute, sex is pretty damn fantastic. But if you’ve ever felt self-conscious in the sack you’re not alone — we’ve heard that more than half of women have avoided sex because they were worried about how they look."

I was trying to figure out where women could have gotten this idea that we should be self-conscious about how we look?

Let’s start with the video excerpt above.  While I’m sure that some people will praise them for their “truth telling," I think the real truth is that they are using this video as a way to try to build self-doubt and low self-esteem, so that they can pay Weight Watchers to “cure” it with body size manipulation.

But this video just came out, so it can’t be the only source of self-loathing. Where else might women have learned to feel self-conscious about their bodies?

Whenever I speak out about Weight Watchers, I get people who are currently fat who tell me “Weight Watchers works, it worked for me six times.” After my initial reaction of slow blinking and opening and closing my mouth like a goldfish, I’ve learned to just simply say, “You and I have a different definition of worked.”

Maybe it was from this Weight Watchers ad, in which Ana Gasteyer sings about how women with arms that jiggle should be ashamed of their bodies.

It includes the caption:

My arms don’t jiggle when I clap
and I go sleeveless
No shame at BINGO
Sleeveless when I’m hailing a cab….

Funny lady Ana Gasteyer is so excited about the new Weight Watchers online plan and mobile app, she just had to sing about it. Now that she's lost that extra arm flab, she can rock that sleeveless red dress.

Or maybe it was from this promotion, which Weight Watchers proudly stated was directed at younger women: 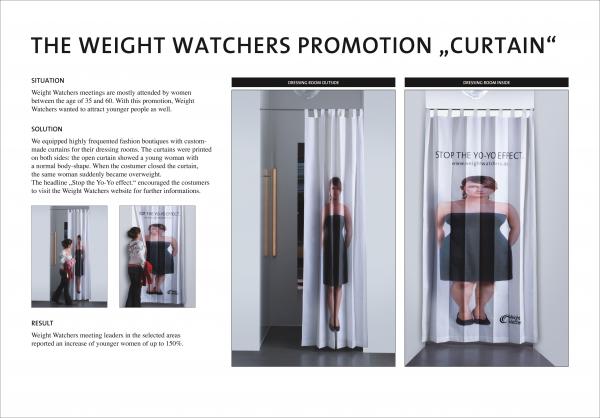 (It's not an incredibly clear photo, but you get the idea.)

Or this one, where people are encouraged to literally tear away parts of a woman’s body: 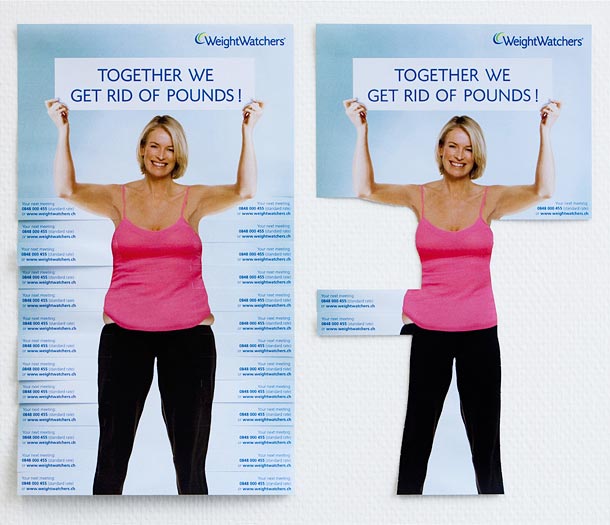 Or do you think it could have been from this one, which is a picture of just the bottom half of a woman (which is not at all objectifying), with a reminder that you don’t get the promotion unless you lose a certain amount of weight (while insisting on their website that it’s not about the number). 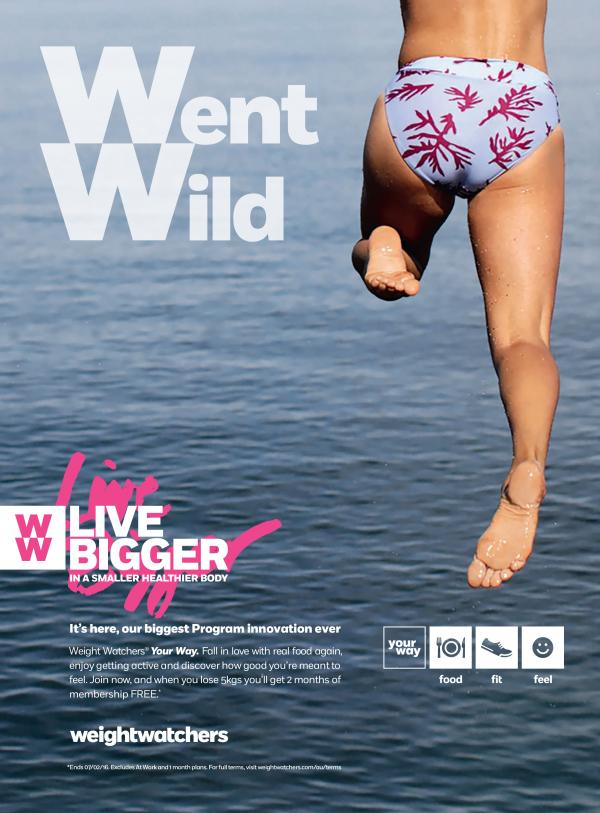 Or was it all those before and after pictures: 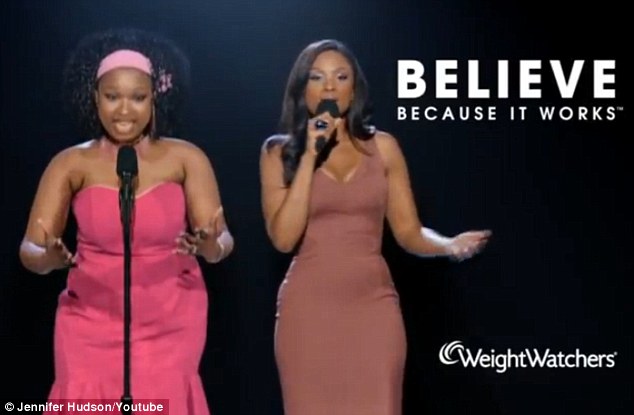 There was a "game" my brother and I “played” growing up, in which one of us would grab the other’s arm and use their own hand to hit them whilst saying "Why are you hitting yourself?  Stop hitting yourself!" It’s not a game I’d recommend, and it’s certainly not an advertising strategy that I find ethical, but here we are.

The truth is that almost everyone who loses weight short term will gain it back long term, with the majority gaining back more than they lost. What Weight Watchers is great at (possibly even better than they are at making us hate our bodies) is taking credit for the short term outcome (and using it in their marketing) and then convincing their clients to blame themselves when nearly all of them regain the weight, so that they come back (and pay) again and again.

Whenever I speak out about Weight Watchers, I get people who are currently fat who tell me “Weight Watchers works, it worked for me six times.” After my initial reaction of slow blinking and opening and closing my mouth like a goldfish, I’ve learned to just simply say, “You and I have a different definition of worked.”

This is an industry that has lost so many deceptive trade lawsuits to the Federal Trade Commission that they are legally required to say that their product doesn’t work every time they advertise it. The work of Size Acceptance and Health at Every Size Activists is coming to fruition, and the word is getting out that weight loss almost never works. People are getting sick of being told that the best case scenario is that we will spend our entire lives on diets and die at the same weight we started at (since the truth for so many is that they’ll end up much heavier than they started, with the added burden of dealing with their celebrations of short term losses, and the subsequent disappointment of the almost inevitable weight regain).

More and more people are realizing that neither our body size nor our health are completely within our control, that we can love the bodies we have, and choose how/if we focus on our wellbeing. More and more people are realizing that diets don’t work and that we can create and pursue health and wellness goals that don’t include trying to manipulate our body size — or consider that to be a goal worth celebrating, or even talking about.

More and more people are realizing that there is no such thing as before and after, there is just during.

So the diet industry is pivoting, co-opting the language of the people who have been fighting against their greed and lies for year. Now the same companies that have invested billions of dollars into convincing us that we should hate our bodies, unless and until we are thin, suddenly want us to believe that they are all about us loving our bodies (as long as we’re still paying them to make our bodies smaller). They hope we don’t notice that they’ve been the ones holding our arms and making us hit ourselves.

I think we notice; and now instead of telling mom and having her threaten to turn the car around, I think we’re going to turn this around on our own by saying no to hating ourselves and talking badly about our bodies, by opting out of diet and weight loss culture, and by creating a world where we actually can appreciate our bodies.