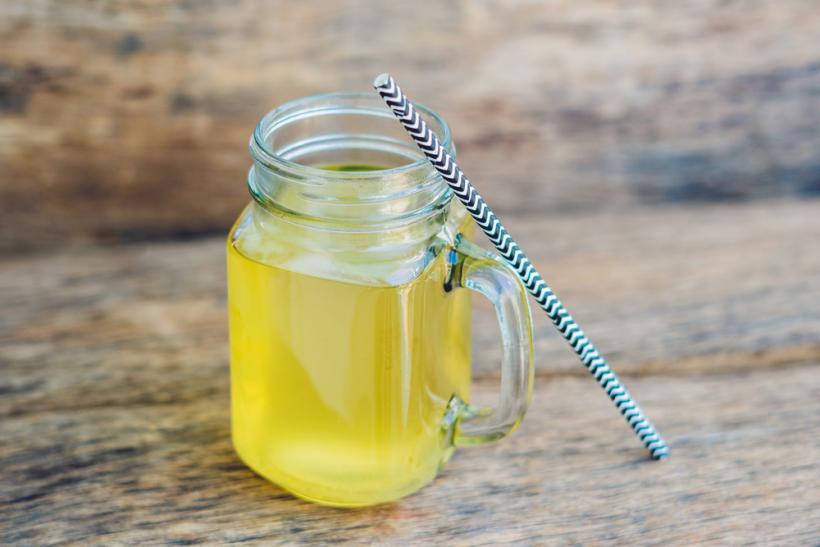 What The Bu actually appears to support and donate to are organizations that engage in size-based oppression to the detriment of fat people.

Nora Haefele was downing a bottle of The Bu Kombucha when she saw it — the message on the bottle.

“Health is our priority. The Bu supports and donates to organizations that fight obesity.”

At that moment Nora realized that, as a fat woman, she had inadvertently funded the oppression of fat people with her drink purchase.

After some quick research, I learned that it’s not just on the bottles. The Bu proudly discusses their fatphobia on the front page of their website:

“Health is our priority. We, at The Bu Kombucha, are passionate about doing our part to curb the unhealthy American addiction to sugar. The Bu is a low sugar, low-calorie beverage alternative that is delicious to drink any time of day.  No one should have to choose between good health and good taste! Sugar-sweetened beverages significantly influence obesity rates. Obesity is a risk factor for the development of diabetes and heart disease. The American Cancer Society says obesity is 'clearly linked' with breast, prostate and several other cancers. The Bu supports and donates to organizations that fight obesity.”

Let’s break this down.

“Health is Our Priority”

No, it’s not. And I know that because if it was, then they wouldn’t be engaging in fat-shaming since studies show that the stress of stigma is linked to many of the same health issues to which being fat is linked. Not to mention that it’s difficult enough to wade through a complicated healthcare system without being made to believe that your body is simply not worthy of care because it is fat. And that belief is what fat-shaming from companies like The Bu creates.

“We, at The Bu Kombucha, are passionate about doing our part to curb the unhealthy American addiction to sugar. The Bu is a low sugar, low-calorie beverage alternative that is delicious to drink any time of day.  No one should have to choose between good health and good taste!”

The concept of “sugar addiction” is questionable at best, so stating it as if it’s a factual thing is incredibly irresponsible. It’s almost as if this is about their marketing.

This actually isn’t proven, which is likely why they didn’t cite any source.

“Obesity is a risk factor for the development of diabetes and heart disease. The American Cancer Society says obesity is “clearly linked” with breast, prostate and several other cancers.”

This is (purposely?) misleading for a number of reasons:

The first factor is that they are talking about correlation and not causation. Not sure if the folks over at The Bu have a college freshmen understanding of how research works, but a “link” between two things, however “clear” (not a scientific term,) can never be used to prove that one thing causes the other.

The second issue is that studies of fatness and disease risk never control for the stress of being under near constant stigma and oppression, or for the effects of a lifetime of feeding our bodies less than they need to survive in the hopes that they will eat themselves and become smaller (aka dieting).

The third issue has to do with the fact that, due to widespread fatphobia in healthcare, fat people do not get the same level of preventative or acute care, and that could be the reason for higher rates of health issues:

“Anti-fat attitudes are found in both practitioners and students, from physicians/doctors, researchers, clinicians, physiotherapists, dieticians, and nurses to students in the medical and dietetic fields...Healthcare providers perceive fat individuals as failed citizens and less likely to be compliant with health care instructions. Ferrante et al. suggest that as healthcare providers are likely to believe that fat patients are less concerned about health, and less likely to be medically compliant with health care instructions, they may believe them to be less interested or worthy of preventative care…Fat ciswomen are less likely to receive cervical cancer, breast cancer screening, and colorectal cancer screening than non-fat ciswomen; this is especially true for super fat ciswomen.”

“The Bu supports and donates to organizations that fight obesity.”

To be perfectly clear, no organization is making fat people into thin people. There is not a single study that shows any lifestyle intervention that leads to long-term weight loss for more than a tiny fraction of participants. Some interventions have a slightly better “success” rate but have a nasty habit of killing and maiming the fat people who try them.

What The Bu actually appears to support and donate to are organizations that engage in size-based oppression to the detriment of fat people.

“Fighting obesity” is not a thing, because obesity is simply a ratio of weight and height. You can’t throw on some pads and a helmet and tackle the result of a math equation. What “fighting obesity” actually ends up meaning is stereotyping, stigmatizing, shaming, bullying, and oppressing fat people by combining sizeism with healthism and concern trolling.

The Bu isn’t the only company that capitalizes on a fatphobic society to try to sell stuff while harming fat people (*cough* Abercrombie *cough*). Language like The Bu is using in their marketing has the net effect of convincing people (often including fat people) believe that fat people are fat first, and people second (and, often, that we are people if and only if we become thin.) That is at the root of far too much of the treatment of fat people in our society.

I am a fat woman, not a thin woman covered in fat. You can’t hate actual fat me, but care about pretend future thin me. You can’t shame, stigmatize, harass, bully, and oppress me while supporting my health. Not even if you’re trying to sell a ton of kombucha.

If you like this article, please share it! Your clicks keep us alive!
Tags
Bu Kombucha
fat shaming
obesity
fat
Plus Size
health
wellness