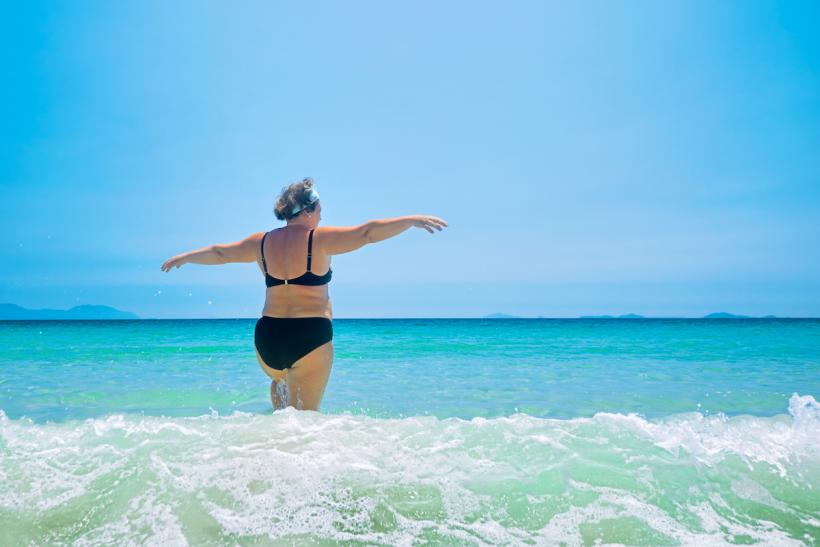 The Body Positive Movement is a movement that’s about autonomy.

People aren't perfect. As such it should be clear that no social movement is perfect, but I think this is something we tend to forget — and for an understandable reason.

When we finally stand up to the biggest evils that plague our society— when we speak out against racism, sexism, homophobia and body shaming, it can immediately feel like we've won the “big fight.”

We think we've unplugged from The Matrix, that “being woke” to these issues have released their power over us. However this is not the case, and every movement has troubling aspects that should be addressed as part of the discourse. The Devil is in the details after all, and there can be no forward progress without criticism.

We could easily discuss the problem of “white feminism” being the problematic default to the feminist movement, queer erasure in the LGBTQ movement, or a litany of other issues, but these are topics for another time. Personally, I don't yet feel properly equipped to talk about these problems, and I'll leave them to be discussed by another writer who can give them the perspective they deserve.

What I do feel equipped to talk about, however, are the intricacies of the body positivity movement; for with all its beauty and empowerment, there are aspects of body positivity that try to control how others view and treat their bodies. Though I understand the intention, behavior like this flies in the face of the ideals the movement is trying to create.

Now, what do I mean by this? Well, at my heaviest weight, I maxed out near 500 pounds. During this time, I experienced discrimination and abject treatment that had a huge and negative impact on my own emotional and mental wellbeing.

I only came to the body positive movement after a long journey that led to me losing over half my body weight. Subsequently, I went through intense cosmetic surgery to remove nearly 50 pounds of excess skin and reshape most of my upper body — and though these experiences only opened and reinforced my belief in body positivity, detractors have used them to entirely discredit my place in the movement, as well as the place of countless others.

That being said, let's take a moment to discuss what the body positive movement is not.

We live under a beauty standard that negatively impacts all those it touches — and it touches everyone.

Those who don't conform to its narrow view of what constitutes “beauty” are insulted and treated like they don't deserve to be there. They're dismissed as “fat” and “ugly” as though the two are interchangeable, and lose all independence in terms of their own sexual identity.

Because of this, it can be easy to view body positivity as the rejection of these social norms by asserting one’s own right to exist. This is where the “real women have curves” aspect of body positivity comes into play — a form of rebellion that, while empowering, entirely dismisses the struggles of those who exist as the ideal in our society.

Even those who do happen to conform to our imposed standard of beauty, privileged though they may be, are judged by those standards as the sole defining aspect of their personality. Their own struggles with body image are written off because of how they look, creating insecurities within them expressed through eating disorders and other unhealthy means.

Despite how it may look on the surface, body positivity does not exist in order to build up the non-conventional at the expense of others. All this does is create a shift in power and change who we view as the “ideal.” That isn't radicalism, nor is it empowerment. If your movement exists only to make it so you are the one viewed as “perfect,” it isn't social justice.

The Body Positive Movement is a movement that’s about autonomy. It is a movement that is about personal independence, freedom of self-expression and the basic human right each person has to exist as an emotional and sexual being.

The essence of the movement is not “you’re perfect as you are, so don’t ever change.”

All that does is exhibit the same stranglehold over people’s bodies and identities that our current standard of beauty does.

The essence of the movement is “you’re perfect as you are, so change as much as you want as long as those changes are rooted in self-love.” It is the understanding that all bodies are valid in all forms. The entire point of body positivity is allowing people the freedom to explore who they are and who they want to be—to give them the tools and support needed to journey into the unknown and craft the person they’ve always hoped to become.

In order to do that, we need to make sure people have the independence to pursue whatever their own version of “being more” is, and to support whatever nonconventional means they go about to get there.

You may not agree with their goals or their methods — and that’s okay. However, you have to realize that these people are not you, and that you are not the last line of defense that needs to stand in the way of what is and is not “body positive.” Those journeys are theirs to go on and theirs alone.

It’s time that we stop vilifying those who decide to go on transformative physical journeys, because the truest form of rebellion against a system that wants one single, static ideal is to encourage exploration and deviation from the norm.

Weight gain, weight loss, changes in personal style, tattoos, body modifications, hair dye, even cosmetic surgery — these are all tools through which people can become the truest versions of themselves. Any of these means of change can affect people positively or negatively, but that depends on the intention of the individual. None of these things are inherently bad or should be used to dismiss someone from the body positive movement.

Body positivity is rooted in a simple belief: that anything you do in order to express yourself deserves to be supported and allowed to thrive — as long as it’s approached through healthy means and in the pursuit of personal growth.

All that matters is that anything you do, you do out of self-love. Any changes you make come out of wanting to continue to grow and be better, whatever “better” means to you. Anything you aspire to be you do on your terms, and not the standards that other individuals or our society as a whole has tried to thrust upon you.

For those of you who have felt like you don’t belong in any respect because of your bodies, in any respect, I want you to know that the body positive movement is supposed to be a safe space for you.

This is because body image issues are something experienced by every person to different extents — and as such, all should be welcome here. The Body Positivity movement is meant to be an inclusive space, one without borders or inane qualifications one must meet in order to be validated; if someone has ever made you feel like you don’t belong in the body positivity movement because of your relationship to your body, they’re so wrong and I’m so sorry.

It’s time that we stop policing body positivity. It’s time that we stop being exclusionary to those who may look like they fit into the beauty standards that have oppressed us — for they aren’t the ones who put those problematic systems in place, nor are their own personal battles any less painful because of it. It’s time that we stop vilifying those who decide to go on transformative physical journeys, because the truest form of rebellion against a system that wants one single, static ideal is to encourage exploration and deviation from the norm.

The Body Positive Movement exists to tell one another that they are beautiful in all forms they’ve taken and will take in the future. We are here to encourage one another to grow and change, to explore and make mistakes, to be a hundred different people before we truly and finally find ourselves.