I Lost 270 Pounds. Here Are 3 Reasons I Don't Share My Weight-Loss “Secrets.” 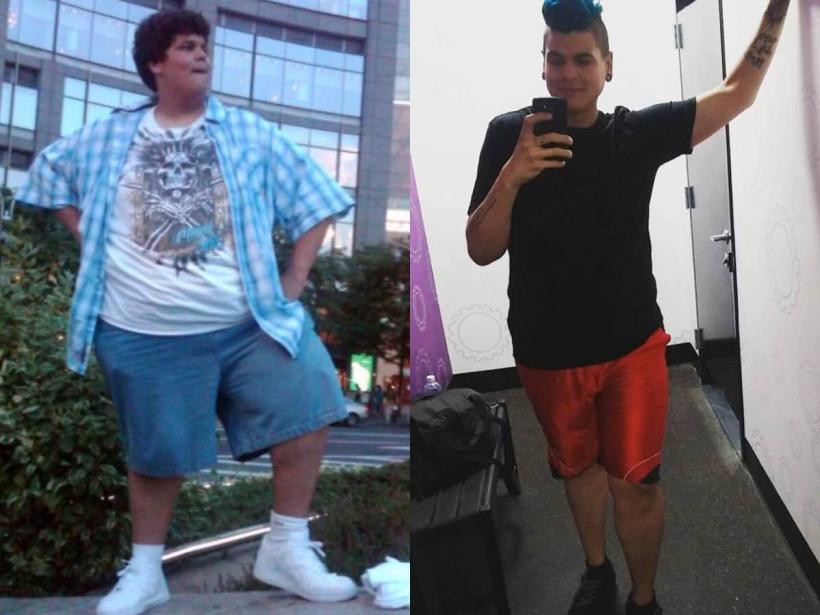 For me, losing weight was about learning what I needed to do and gradually forming a positive relationship with my body. Image: Matt Joseph Diaz

You’re a human being, not a machine built for calorie-counting and exercising.

“Oh wow, you’re half your heaviest weight? What’s your secret?”

That's the second most-often question I'm asked in my day-to-day life, right behind, “How tall are you?” and before, “How do you get your mohawk to stand up like that?”

The weight-loss question, however, is not such a quick and simple answer. Often when people ask how you made such a drastic change, they’re looking for advice. I have no qualms about sharing my story with people — it’s a hell of a story. It’s just that this question usually comes to me in crowded bars during a long night of drinking.

Hardly the time to tell my emotional story and paint someone a picture with my word-brush.

Being asked about my weight-loss “secrets” make me uncomfortable. It feels very different from people wanting to know about my story. It feels like being asked to provide a shortcut.

There’s a lot of reasons why I don’t like to tell people about the minutiae of trying to drop 270 pounds. Here’s just a few:

1. My relationship with my body is complicated, and so is yours.

My weight loss journey was a long and difficult one, filled with missteps and bumps in the road. The majority of the 270 pounds lost happened over a span of about 4 years, after I became a member of a study at the NYU Langone Medical Center to see how lap-band surgery affects people under 18 (I was 16 at the time.)

This is often looked at as though I took some sort of “easy way out,” but all it was was a tool to help me learn moderation and my body.

I dedicated myself to working hard and became one of the best patients in the study, but the first year was basically spent doing it all wrong — I was newly-vegetarian at the time and had no idea how to make sure I was getting what I needed.

Beyond that, I have issues with binge- and emotional eating, some digestive problems, and a slight vitamin B12 deficiency. For me, losing weight was about learning what I needed to do and gradually forming a positive relationship with my body.

I’m not comfortable giving weight-loss advice, because I’m not a personal trainer or a nutritionist. I’ve only figured out what works for me — and even that took a lot of time and includes messing up every now and then. What worked for me as a 497-pound 16-year-old guy going on a 4-year transition in weight isn’t necessarily going to work for a 25-year-old woman who just wants to drop 10 pounds before summer. (And girl, you look good either way.)

If I told everyone the same dietary restrictions I started myself on, my advice would basically be No Doritos before noon, which would be terrible advice — not everyone eats as many Doritos as I did at my heaviest weight (and sometimes you want Doritos at 11 AM).

2. There are no weight-loss “secrets.”

So often, it feels like everybody in the world wants to tell you their weight-loss secret.

A few weeks ago, I was in an Uber driven by a very nice Pakistani guy who insisted his secret to losing 70 pounds was to “just stop eating hamburgers.”

Holy shit, Usman, how many fucking hamburgers were you eating?

Weight-loss secrets are everywhere. Fad diets are constantly on the news and new age health sites, and celebrity diets are the topic of an unimaginable number of tabloids and E! News gossip segments. It’s hard to ignore them at this point — which certainly makes you think that if they really are “secrets,” they must be very poorly-kept ones.

You may ask yourself why there are so many new fad diets poking their head out every day.

The answer is pretty simple: There are no weight-loss secrets. Diets don’t work.

Move your body in ways you love. If you don’t enjoy running, find an activity you DO like.

I’m saying that those fad diets you read about are basically all bullshit. They’re short-term quick fixes that may show some immediate results, but are rarely studied long enough to show their harmful long-term effects on the body.

People are fooled into believing that there are ways to lose weight quickly by imposing intense and harmful restrictions over a short amount of time, rather than developing a gradual knowledge of what your body does and doesn’t need.

That’s why your aunt who lost 15 pounds before the cruise gained it all back by the time her vacation was over. Of course it didn’t work in the long term, Auntie Barbara, you’ve had nothing but avocados and room-temperature water with cayenne pepper flakes for three weeks.

3. You probably wouldn't want to hear my actual advice anyway.

Here’s the simple truth: When people are asking for your weight-loss “secrets,” they’re usually asking to avoid the answers they normally hear. These answers are boring and clichéd, but they’re clichéd because they work.

So, if you really want it, here are my weight-loss “secrets.”

See #2. There are no weight-loss secrets. Diets don’t work.

Stop killing yourself over every calorie or a day missed at the gym. You’re a human being, not a machine built for calorie-counting and exercising. Things get busy and stressful, and sometimes you need an opportunity to eat some cake or watch a movie. Life is a delicate balance — and that works from both sides.

Move your body in ways you love. If you don’t enjoy running, find an activity you do like.

Make a hobby out of cooking interesting recipes. When it stops feeling like something you have to do and becomes something you want to do, that's life.

The hardest part of any journey is not quitting when you’ve had a setback, regardless of what that journey is.

Your ability to keep moving forward when things haven’t gone your way is what will end up defining you — not the shape of your figure or the numbers on your scale.

If you like this article, please share it! Your clicks keep us alive!
Tags
diet
weight-loss
Secrets
lap band
body image
diet culture