5 Ways Men Can Make The Man Cave A Feminist Space 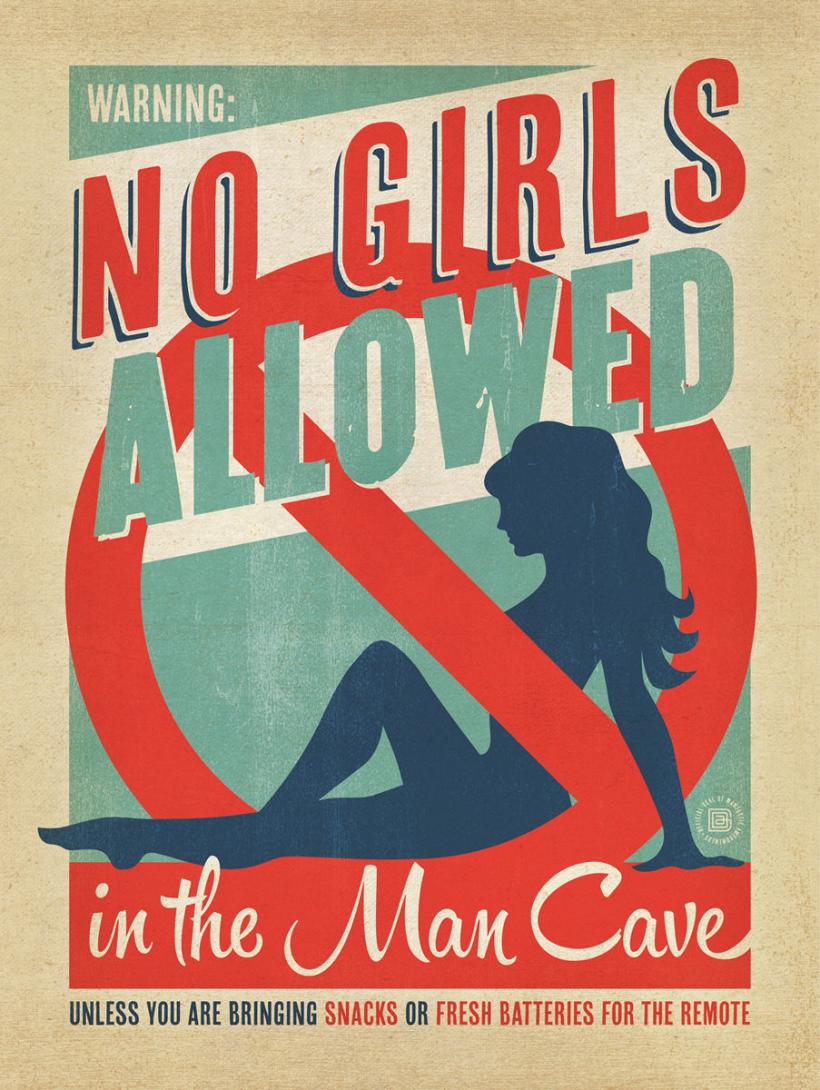 Ultimately, who is allowed in the Cave should be based on what they’re interested in, the type of environment comfortable with, and what you intend to do there.

Men, we need to dismantle the Man Cave.

Of course, all people need spaces where they’re allowed to be as messy, noisy, or as emotionally vulnerable as they need. Everyone should be allowed those spaces and men should have places and ample opportunities to bond with one another.

However, the private spaces men create and maintain for themselves often breed toxicity. “Man Cave” — supposedly the secluded spot in a home where a man creates his ideal masculine environment — has become a euphemism for “a place where me and my friends can say awful misogynistic stuff without my wife, girlfriend, or mom scolding me about it.” That’s kind of gross.

So how can you make this (or any men's space) feminist? It begins with letting go of the idea that this sort of space is necessary in the first place and moving on from the idea that any interest, activity, or kitschy sports-themed home décor is inherently masculine.

That said, no one and nothing can be perfect. It’s about doing your best. Then examining what you did. Then doing better.

The first step is to change the language you use to talk about your men's space.

Guys, is it really necessary to call it a “Man Cave”? Would calling it something else take away any of the pleasure of enjoying the space? It really shouldn’t.

Stop calling it a “Man Cave.” Aside from the fact that it’s basically the same as this:

Calling it a “Man Cave” advertises to all women that they are unwelcome in the most important areas of your life.

Best case, it tells women you don’t like being around them. Worst case, it’s a threat and an admission that the way you privately think and talk about women is so terrible, you need to hide it from them or else they’d cut all ties to you as a human being. Even if that isn’t the case, it’s probably what it feels like to the women around you every time you say the words “Man Cave.”

Instead, start calling it the “Mess Room,” the “Poker Lounge,” or the “Home Theater.” Maybe just drop “Man” and call it the “Cave.” If you’re a decent person and the function of the place really isn’t to keep all women away, then give it a name that reflects what it’s really for.

If you now have a Mess Room, is the faded Bud Light poster of Pamela Anderson in a bikini from 1995 doing anything to maintain the space as a safe place to make messes? No. That’s for a Man Cave, not a Mess Room.

Get rid of all the things that are essentially “boys only” signs. Lose the objectifying posters and ask the woman behind the counter at the video game shop if she’ll give you that huge standee of Samus Aran when they’re done with it. After all, it would look pretty awesome next to your video game shelf.

Whatever it is you’re going to do in your Cave, fill it with stuff that makes those things easier or more fun to do.

Break out of a binary, gendered pattern of thinking. “All guys are into this” and “women are only into that” is Man Cave thinking. Now that you’ve got a Cave, invite people inside based on the activities you want to enjoy — and make every effort to invite more women!

Your brother who steps in front of the TV, interrupting a football game to vacuum cookie crumbs, doesn’t belong at Football Sunday just because he’s a guy. Invite a woman who is pumped for football.

Ultimately, who is allowed in the Cave should be based on what they’re interested in, the type of environment comfortable with, and what you intend to do there.

Normally, I’m all about inclusion. This is the exception to that rule.

No space can be completely safe for all people at all times, but that doesn’t mean you have to tolerate people who make it uncomfortable for others. Some people will try to turn the Cave back into a Man Cave. It’s important not to let them.

Maybe you’ve got a cousin who never stops arguing that women shouldn't be there because they "don't get football." Man Cave thinking is so prevalent — it’s the status quo — and many of your other guests may uncomfortably smile, nod, and play along while he harasses the women there.

Pull him aside, talk, and explain the issue. If he can’t figure it out, stop welcoming him. Hang out at other times in other places, but protect your Cave for what it is, not what he wants it to be.

You shouldn’t go to other people’s homes and dictate how they use that musty, half-finished room in their basement (you’re a participant — a guest, not a host), but there is still plenty you can do to improve that Cave (these tips may look familiar…).

First, don’t call it a “Man Cave,” even if your host does. Call it the “Cave,” or “Football Sunday” rather than “Guys' Night.” Whatever you do, don’t sign your name on the “Boys Only” sign.

Next: You can’t go around ripping posters off of other people’s walls, but you can start a conversation about how the wall space could be better used — a shelf for movies, a dart board, or even just a more interesting poster. Maybe even give him that new poster as a gift.

Always encourage the host to invite mutual female friends. Ask if your girlfriend can come, because she’s a beast at this one tabletop game you’re all struggling with. Find opportunities to subtlety point out there’s no good reason women aren’t there.

Finally, don’t play into the Man Cave mentality of the group and call others out on it. Sure, communicate in the language of that group — joke around, make fun of the guys who say problematic stuff for being stuck in a backward, 1940s mentality — but call them out. And yeah, eventually, if things don’t change, consider looking for a new group to hang out with.

No matter what MRA would have you believe, men's spaces — either de facto or by design — remain prolific.  From professional sports to Uncle Matt’s basement, spaces where women are unwelcome (or worse, unsafe) are far too common.

Of course, you could apply all five points above to your Cave and still end up hanging out only with men, watching Die Hard or some other movie that fits masculine stereotypes.

It’s OK. It’s fine to enjoy Bruce Willis movies with your bros. The point is, you’re doing better and you’ve still made your space much more feminist. Again, it’s about doing your best.

You may have noticed, but in making a traditionally masculine space feminist, it’s not really a men's space anymore — at least not in the sense that it’s for men only. That’s kind of the point.

Now go do your best. Then do better.

If you like this article, please share it! Your clicks keep us alive!
Tags
man cave
feminism