Am I Only Successful Because Of My Schizophrenia? 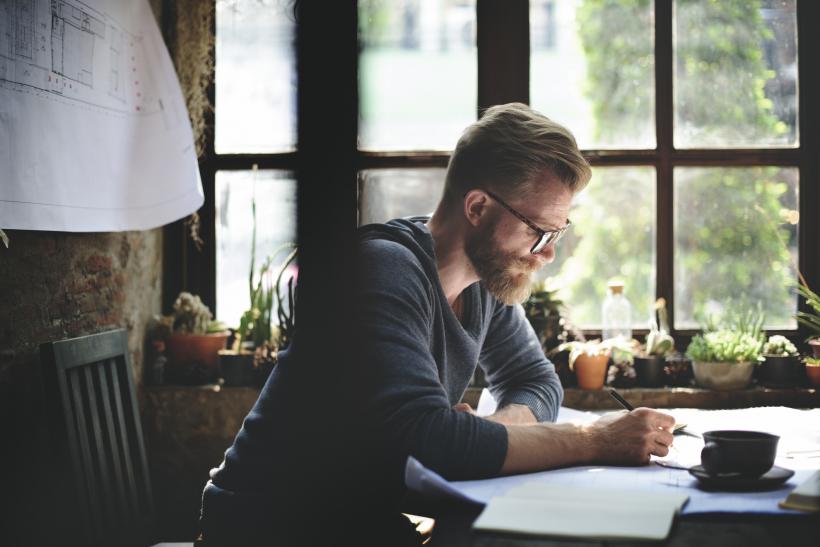 Being honest about myself, or my son. (Image Credit: Thinkstock)

I haven’t really written anything in a while.

There are a few reasons for that. First one being that I have an 8-month-old son who, for obvious reasons, takes up a good bit of my time. I have no complaints about that. He’s everything to me and I adore every moment spent with him.

The second reason being that I’m currently working on two separate projects that require my attention. One of which is a children’s book that I’m illustrating, and the other is a book on Stoic philosophy for kids, for which I’m both illustrating and co-writing.

But, if I’m really honest with myself, the last reason is probably the main one.

I’d been writing and illustrating for a few years now and it was only recently that I began getting regularly published. I’d written and submitted all kinds of work all over the place with few snags. I’d even done work for Neil Gaiman and Ridley Pearson, and yet I was still stagnant. So what changed?

I became open about my schizophrenia.

I’d found out that I was going to be a father and decided it was important that I stop hiding so that my son could see that you should never be ashamed of who you are. I wrote and illustrated a short comic strip explaining my illness and how I deal with it every day.

After that I wrote a piece for Stigma Fighters and then went on to write an article for Psychology Today. Not long after that, I wrote a personal favorite article of mine about living happily ever after, despite my schizophrenia.

Since then I’ve regularly done art for my beloved Aunt Ginger at Ravishly.com and even wrote a few more articles on mental illness, but I also wrote one on my wife’s pregnancy and her eating disorder. Somehow though, it always seemed to end up coming back to my mental illness.

It felt wonderful that I had people responding to it. Some even said they were inspired by my strength and openness. It felt good to give people hope and to finally be living out of the shadows.

But there was something nagging at me.

I’d worked so hard for so long, hoping that my skills as an illustrator and writer would eventually allow me to make a full living on them... and I never really made any progress. But then I became open about my mental illness, and suddenly I could write article after article about it, and they would all get published. A part of me felt like I owed my success to something I’d hidden from for so long. In a way, it was like turning a curse into a blessing. But then this one question rang through my mind…

Would I have made it this far without my mental illness?

This gave rise to a snowball of terrible questions. Was my mental illness my only worth? Is it right to make a living off of it? Is that who I want to be known as? Will my career forever be, “Look at this artist who made it despite his illness!”? Never mind the fact that before I came out, my artistic and writing career was struggling.

After that, every time I sat down to write something I could feel that whisper in the back of my mind, haunting and uncomfortable, like someone writing a message to me on glass with their bare fingers.

So I stepped away. I kept drawing my beloved Aunt Ginger strip because she deals with all sorts of wonderful topics that have nothing to do with me. But other than that, I was determined to focus on my career in a way that had nothing to do with my mental illness. I had to know I could make it without the pity of schizophrenia hanging over my head like an old Christmas ornament that should’ve been thrown out a decade ago, but you keep it around because you’d feel bad about letting it go.

My wife and I started an art studio called Whimsical Mischief Studio, created an Etsy account, and even had several people donate money to help get us started.

I’d like to say this ends with me saying “Our art studio has surged and we’ve been doing amazingly!” But the truth is, it’s been a slow climb up the mountain.

We’ve had some wonderful commissions like a Father’s Day superhero comic, illustrations of fairy tale characters for people’s children, and a number of drawings of someone’s favorite rock star for their birthdays.

But it hasn’t flourished. My wife still works a full-time job on top of painting, sculpting, and even sewing these adorable Swedish Dala horse ornaments. Meanwhile, I work part-time, I’m home with the baby, and in between I work on my two major projects that I’m lucky enough to have on my plate.

I may not be a famous or endlessly successful writer and artist, but I’m content that I was able to do this without the need for the schizophrenic boost. I don’t ever really wish to be famous, I just want to be successful. I want to be able to create my silly, heartfelt drawings and stories and make a living that allows me to give my wife and son a comfortable life.

But there’s more to it than that now. I think about the others who are like me who were strengthened and inspired by my writing. Those who still feel lost or alone. I’d never set out to be an advocate for anyone but, especially now, we need those who have a voice. Those who are willing to stand, imperfect and broken, in the brightest of lights without fear or shame.

Whether I like it or not, being schizophrenic is a part of who I am. It’s not entirely who I am, and there will undoubtedly be those who can’t see past it. But that’s their issue, not mine.

I’m a writer and an illustrator who writes articles, kid’s books, and poems, and draws anything and everything that touches my heart… and I happen to be schizophrenic.

And I’m proud of that.

If you like this article, please share it! Your clicks keep us alive!
Tags
mental health
schizophrenia
parenting
success
career