Ask Erin: How Do I Tell The Guy I Met On Tinder I'm Not The One In My Pictures? 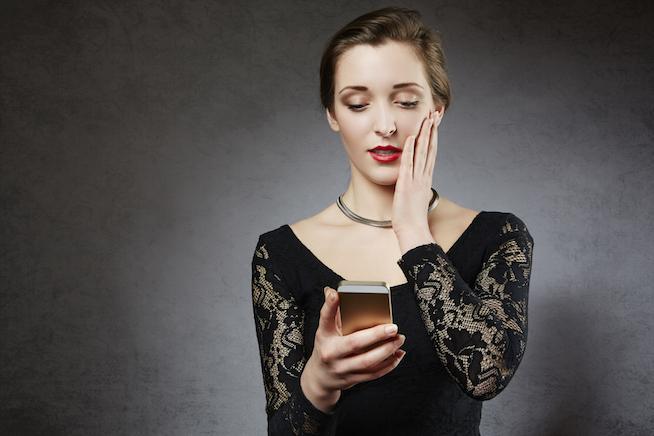 really want to meet him, but I don’t know what to do because of the pictures.

She’s made all the mistakes, so you don’t have to…Ask Erin is a weekly advice column, in which Erin answers your burning questions, about anything at all...

OK, I am sure I’m going to catch hell for this, but I created a fake profile on Tinder. I mean, the profile isn’t completely fake, but the pictures are.

I guess I did it because I was bored, and more importantly, I was afraid of using my own pictures in case someone recognized me. I know it was wrong of me to use someone else’s picture.

What’s worse is that I used pictures of an acquaintance. We don’t live in the same city but we are Facebook friends etc. And, admittedly I am WAYYYY too old to be playing these games.

I started talking to this guy and we just hit it off. We have so many things in common. He wants to meet up. I really want to meet him, but I don’t know what to do because of the pictures.

I’ve even sent him pictures via text that are not me, that I took from her Facebook page instead of me. WHY did I do that? I am not unattractive. (Actually, I might be prettier than the girl whose pictures I am using.)

This guy and I get along so well! Our personalities click. But I lied to him and I don’t know how to tell him the truth. I’m afraid he won’t feel the same way after what I’ve done. Should I just meet him and he can figure it out for himself?

Do I tell him? Do I ghost him?

OOF! Have you not been schooled by all those Catfish episodes yet? It usually does not end well for the impostor!

Darling, I don’t think there’s an easy way out of this one. However, by stepping up to the plate and owning what you did, you can relieve yourself of the warranted guilt and learn a lesson that will ensure you don’t do something this stupid in the future.

First, it’s so not fair to him to show up as a different person and expect him to just roll with it.

Second, it is the coward’s way out to ghost him. What I would recommend is a well thought out email, laying out the truth, and leaving the ball in his court. If he wants to continue speaking with you, or meet up with you, he can. If not, you’re giving him an out, without putting him on the spot in a face-to-face reveal.

Lastly, don’t do this again. It’s dishonest, it’s mean, and it won’t get you what you want. Also, it’s super unfair to that acquaintance of yours. Years ago, someone pretended to be me, chatting it up with some guy who ended up tracking me down at my place of work. It was awkward for all three of us, super embarrassing for the guy, and a little scary for me.

In general — in all matters, including dating — BE HONEST. No one wins when you lie, conceal, or deceive.

If you have a question for me about love, life, dating, divorce, taxes, parenting, witchcraft, the 90s, or anything at all, email me at rarelywrongerin@gmail.com. As always, your anonymity is golden. xoxo

If you like this article, please share it! Your clicks keep us alive!
Tags
Ask Erin
dating
Tinder
online dating
dating advice
lying