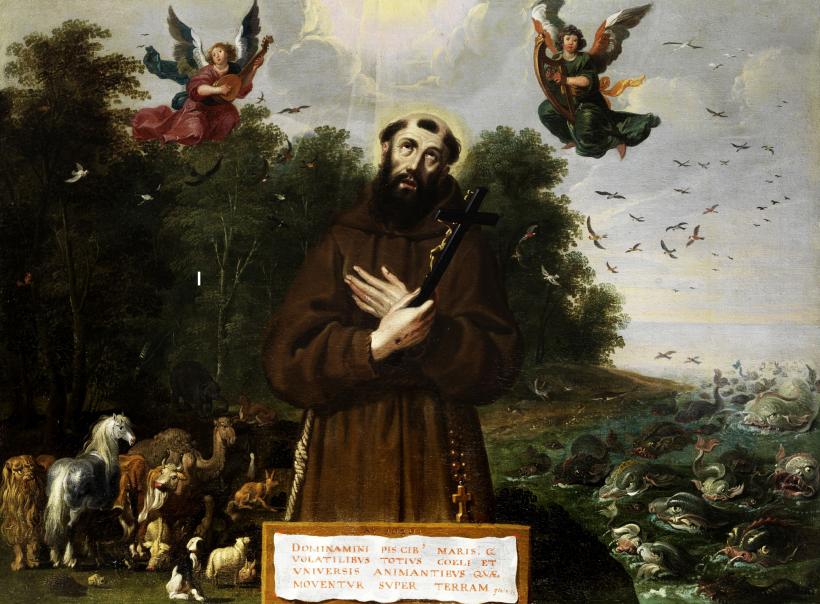 Mark wasn’t religious, but he wore a St. Francis amulet around his neck, a gift from his father. Nights when he didn’t come home, I prayed to St. Francis, too.

"You know what I like about you?” one man, drunk, says convivially to another. “You're authentic."

Both are sitting on the sidewalk in front of a derelict building. What's called my attention to the pair is that the one man, the authentic one, is sitting next to a puddle of what I presume is his own vomit.

I keep walking. I'm on my way to the discount store with a list. Cleaner. New mop. Electrical tape. Bin bags, as Arran calls them.

It's Sunday. We've put a pause on wedding planning and are giving the apartment a deep clean.

I don't know whose idea it was, but we're both in agreement. It's Day 2. Saturday, we purged and swept the bedroom and fixed the curtain that was drooping on one side. We cleaned out the kitchen cabinets. Arran tidied his papers and I got rid of some more stuff and we got a new shower liner and I used a lot of bleach. We did the laundry. Arran put on the cd I made him for his birthday. While I dusted, I looked at his books.

It's the same apartment, though very different — a very different lifestyle than I was living 10, even five years ago in this same space. Different than before I got sober, or even when I first got sober — when I lived with Mark. Before Mark and I lived together in my current apartment, we lived in the West Village, where I taped a piece of paper on the fridge on which I wrote "mean things Mark says about me." I felt some pride when I got Mark to stop calling me a bitch.

It was a different kind of pride I felt six years later, when I finally had the courage to end our relationship, the first time.

I grew tired after too many nights when he hadn't come home, listening for sirens... Not knowing if I should be angry or concerned as it grew later, wondering more and more seriously if maybe this time he was dead, then beginning to wish it would happen so I'd finally be free. After five or six years of dating and him refusing to vacate my apartment, I refused to continue being held hostage.

We broke up and even though the apartment was in my name, I moved out.

Then, less than six months later, I lost my job. Mark offered to help, saying he’d support me. I needed help and support, so I moved back in.

Mark prayed to Saint Francis, a patron saint of drunks and (according to Mark) lost causes. Mark wasn’t religious, but he wore a St. Francis amulet around his neck, a gift from his father. Nights when he didn’t come home, I prayed to St. Francis, too. I kept going to AA meetings and at some point I started going to Al-Anon. I started going to dharma talks and I learned about metta. I was just beginning to learn about self love.

The last straw happened one night he didn’t come home until he finally did, drunk — just like too many nights.

That night when he came home, like many nights, he wouldn't let me sleep.

He was crying because he said he'd gotten into a street fight with a homeless guy who he said had kicked him in the nuts. This kind of shit was always happening to Mark.

Someone was always busting a bottle over his head or else he'd be passed out somewhere and, according to him anyway, someone would steal his wallet or watch. Who knows the true story?

These days, while I sometimes question my priorities, I never crave my old life. Not any part of it. I know that what I admired about myself before I got sober was mostly untrue, and the contempt I held for other people — "normal" people — was a lot of self loathing and fear.

Earlier that day, I had hosted a meeting of people for work, and I'd made them all lunch. It was six months since I’d lost my career as a teacher. By the grace of who knows what, I was moving on with my life. A new career had begun to unfold. The meeting had been good. There was a sink full of dishes. I left them, to do the next day. That’s when Mark didn’t come home and then he did, drunk. That night, drunk and in pain from having been hit in the nuts,  Mark threw up everywhere, all over all the dishes. All over the floor.

I had been a drunk once, too. But at that point, I was six years sober. Mark couldn't string together six months and it always felt wrong to abandon him. Until that night. Finally, I'd had enough.

After we broke up the second time, I got Mark to leave the apartment where Arran and I now live. For a long time (before I met Arran), walking the dog alone at night, I sometimes missed Mark. Or, at least, that’s how it felt. I learned to sit through those feelings. I rode my loneliness out.

Sometimes, I look at my life and it looks really fucking foreign and close to the lives that, previously, I would have judged as boring and phony and false.

Some days, I see myself picking out wedding favors or texting with my cousin regarding our plans for her visit and I think, Who the fuck am I? Is this really my life?

These days, while I sometimes question my priorities, I never crave my old life. Not any part of it. I know that what I admired about myself before I got sober was mostly untrue, and the contempt I held for other people — "normal" people — was a lot of self loathing and fear.

Getting married is not about wearing a tiara, or being given away, or taking a man’s name — a name to replace my fathers, a name I've already reclaimed and will be keeping, thank you.

In the discount store, a child tells her father "I want glasses.”

He says, "You don't need glasses."

I remember myself as a child, all the things I wanted and could not have, and the one thing I truly needed not having and so I felt empty and drank and fucked to fill it up.

I have a joint bank account now and can buy anything I want. I buy sponges and body lotion and a chocolate bar for Arran, and one for myself. I call Arran and ask if we need a new mop or just a new mop head and he tells me he’s not sure, the mop is wonky and he can't determine if it's just because the head needs replacing or if the whole thing is fucked.

He's impatient as I keep him on the phone while I try and make the decision, as I'm sure I'd be if I were in the other end, but in this moment I feel grateful.

I finish my shopping and pay and leave. The two men are still there and the one man, the authentic one, is now laid out on the ground and there's a couple standing over them.

I overhear them say they've called 911. The other man, the authentic one’s friend, is thanking them.

I keep walking, and think of St. Francis, and send up a thank you for answered prayers.