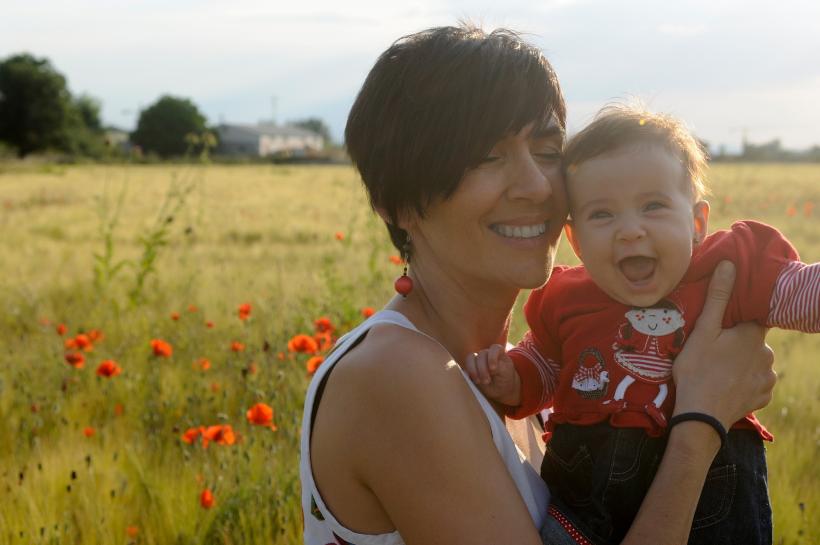 "Can you be a parent and still be a person? Can you still have whole and complicated experiences? Maybe the answer is yes." Image: Thinkstock

For those of you just tuning in, my wifespouse wanted to go to this weirdo punk festival in the middle of nowhere, and I, a chronic pessimist, decided it would be a good idea to go as a family. That means me, her, our 1-year-old child, and one incredibly intense weekend.

I (reasonably) assumed that any road trip with a baby would take longer than a road trip without a baby. The gates at the festival opened at 1 pm. Google Maps helpfully informed us that we had a five-and-a-half-hour drive ahead of us, but I reasoned that with stops, and with a baby, it was likely to take more like seven — or maybe even eight — hours to get there.

At this point, everyone who has actually had a 1 year old is probably stopping to laugh at me. “Oh, honey…” you are saying into your cupped hands.

So I figured we’d leave at 8 am (take another break for laughter!) and probably get there by five, when the music would start. What actually happened is that we left at 11 am and arrived at, you guessed it, 10 pm.

It didn’t feel possible even while it was happening, but those were the actual numbers.

I have experienced the joy of attempting to pitch a tent in the dark while exhausted and out of it before, but to do so while continually saying, “I know, sweetheart, we just have to get the tent up and then we’ll take care of everything you’re concerned about, I promise, you’ve been so patient already!” in response to your crying baby is a whole other beast.

By the time we got the damn tent up, got our essentials out of the car for the night, went through registration, and nursed the baby, it was midnight. The band that I most wanted to see was just going on, and my child, far from going to sleep, was standing up in the middle of our newly constructed tent, clapping and shouting “BALL!” over and over again.

So his other mother and I did the only thing that made sense. We strapped that child to my back and walked across the field to see the last band of the night. As we walked into the venue, a barn with open sides, the baby started dancing on my back.

We put those headphones type things that cancel out a lot of the noise on him, and he listened with rapt attention. He stared around at the crowd.

They played a song that reminded me of being young, of being confused, of being desperate to connect with my family and not knowing how, and I felt my voice crack and the tears stream down my face.

Can you be a parent and still be a person? Can you still have whole and complicated experiences?

Maybe the answer is yes. Maybe you can. Maybe I can.

In the tent, I was nervous about how sleeping would go. At home, our son sleeps well in his own crib in his own room, a change we made after he literally wouldn’t sleep if I was in the same room as him. But in the tent it was going to be a co-sleeping free-for-all.

It was still hot at 12:30 am, so we spread out our sleeping bags to help with the bumpy ground. But somehow we all slept.

At 8 am, the baby was up and laughing to find himself still in the tent.

And that’s pretty much how the rest of the trip went. Honestly, being at a punk festival with a baby was, in most ways, way easier than I expected it to be. Sure, there were difficult moments, there were inconvenient diaper changes and impossible sunscreen applications. The heat was intense, and it was actual work to stay hydrated (especially for me, as the breastfeeding parent).

But mostly, the weekend didn’t feel like a chore the way I had feared. Mostly it felt like being given the gift of having to loosen up a little bit. At home, the baby always always always eats in his high chair (because I don’t want a chronically sticky living room) and it requires a fair amount of clean up.

But at the festival? Just plop him in the grass and hand him a bag of cherries! We spent most of Saturday chilling by the little lake, visiting the chickens (because there were chickens and my kid loves chickens), people-watching, and hearing good music. My wife would occasionally take him inside the venue for a bit, but I was content to sit where we could hear the music but it wasn’t loud-loud.

“Wow! There’s two babies here!” someone said to me excitedly.

While I had seen a couple of older kids around, I wasn’t expecting any other babies, so I was excited too.

I had been terrified that people would be angry with me for bringing a baby, that I would feel constantly judged, and that it would further contribute to my feeling of being an outsider, even in this big group of outsiders.

But if anyone did think we were awful for bringing a baby, they kept it more or less to themselves.

Instead, my kid shouted “HI!” at groups of people, and usually they at least stopped to wave. When we were walking around as a family, folks would come up to us and say, “I’m sorry to interrupt, but I saw you dancing with the baby in there earlier and I just want to tell you that’s so fucking cool.”

We met up with some friends, and they seemed more than happy to share their snacks with a grabby toddler, and generally amused by his antics. I was starting to feel more connected to other people again. I was starting to feel like I was learning a lot about my kid, and my family, and myself, that I probably couldn’t have learned any other way.

My wife and I traded off on baby duty so we could both have a little bit of “adult time,” and I used almost all of mine for swimming in the filthy lake.

Floating on my back, I realized I hadn’t been swimming since he was born. I felt like I was coming back to myself.

The other baby turned out to be two weeks older than my kid. She handed him her sippy cup full of water, and they hit it off right away. For the rest of the day, I kept running into her and her mom, and we talked about how surprisingly resilient kids are, and the different ways we were dealing with the very beginnings of toddlerhood.

At one point Saturday night, my wife was in the bathroom, and I was sitting in the grass with the other mom, and our babies (well, her baby was attempting to run off, but you get what I mean). A very drunk woman approached us, looked at the babies on the ground, and said, “Can you just ask you… I feel like this is probably my last summer to do this before I get pregnant: was it really worth it? And how feasible is coming to something like this with a kid, honestly?”

I wanted to answer her question seriously; I didn’t want to be part of the pressure that’s put on women to have children. But I was also feeling so positive and happy in the moment, it was hard not to just say, “Totally feasible; totally worth it.”

Then my kid snuggled into my arm again, and another band started.