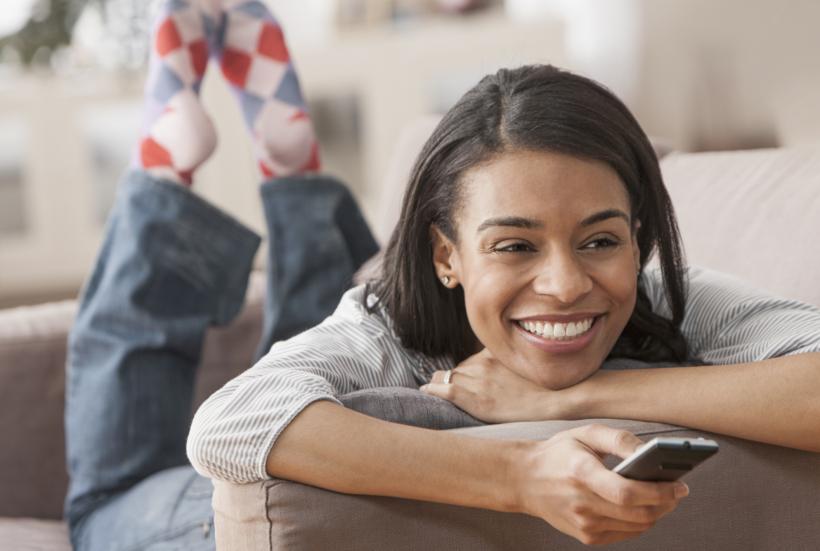 Every time I watch some absurd scenario unfold, I grow increasingly grateful for my normal — no matter how boring it sometimes seems. Image: Thinkstock.

I see these shows constantly changing my perspective towards matters in my own life for the better.

Last night, I went to bed stressed beyond words, my mind racing with worry and anxiety that had been stockpiling all day.

I’ve never been great at meditative thinking. To be honest, it usually makes me even more uneasy.

Am I doing this right? How much longer do I have to do nothing? Wait, what was that sound? What now?

It’s a rabbit hole of clarity that I am not ready to fall into.

Most nights I rely on trashy reality TV to unjumble my thoughts and get centered.

To some, that logic is a little fuzzy, but to me, focusing on someone else’s preventable drama seems far preferable to obsessing over my own. Example: last night, my DVR doctor prescribed Little Women LA and Catfish to be my audio-visual Prozac.

It cleared that overwhelmed feeling right up.

I’m a big fan of sociology, human nature, voyeurism… whatever you choose to call it.

For this reason, I live for a day spent watching documentaries on Netflix or just lying in bed watching Bravo all the live-long day.

However, for some reason, the former gives people the impression that I enjoy deep thinking and issues that affect our country, while the latter gives off the vibe that I somehow am a vapid, silly girl who thrives on drama.

One is a valid intellectual pursuit, and the other is a waste of brain cells.

Why is that? Can’t they both exist in the same space?

Can’t I be an empowered woman who just happens to be looking forward to the late-summer return of Bachelor in Paradise?

In recent months, I’ve found myself seriously considering why I am so innately drawn to some of this programming.

Even I know that a lot of what I’ve consumed is complete garbage (I’m looking at you, Girls Next Door and Rock of Love), but here is why I am A-OK with my obsession: These shows make me feel sane and thankful for my relationships.

On multiple occasions, I have received eye rolls when I start relating real life situations to things I have seen in various iterations of the Real Housewives (as it’s a bit like comparing apples to, umm… Fabergé eggs). But I really do feel that, on some level, these shows serve as a basis for comparative analysis.

One could take that as a negative, as suddenly your modest apartment seems to look like a cardboard box next to an Orange County mini-mansion.

But I see these shows constantly changing my perspective towards matters in my own life for the better.

Not unlike many people, I have been on the receiving end of an emotional outburst by a friend, but I have never had a table flipped on me in a fit of rage or had my extensions ripped out on a busy street corner. (This could be because I don’t wear extensions.)

Also, I get to live with the certainty that my boyfriend would never berate me on a national platform or fake a cancer scare to gain publicity.

Every time I watch some absurd scenario unfold, I grow increasingly grateful for my normal — no matter how boring it sometimes seems.

It is the best escape.

Maybe I shouldn’t be so analytical or feel the need to defend my leisure pursuits.

I first realized the redemptive and escapist powers of reality-show squabbling when my father was battling cancer and I would come home from the hospital and gorge myself on RuPaul’s Drag Race. Nothing could be further from my sterile grim reality of hospice care than dick puns and glitzy queens lip-syncing to Kylie Minogue.

It instantly shifted my energy to something shiny and distracting.

Even if it was sometimes a glittery blur, it was still preferable to focusing on the negative.

Also, there is something to be said for aspirational living, as long as you are aware of it and don’t get lost in the fantasy.

I will likely not be able to to go on a sunset camel ride with my best gal pals in Morocco or have a yachting afternoon in Bora Bora, but I can watch it happen and temporarily see what that’s like: the good and the bad. I can also surround myself with bold personalities and people from backgrounds that I wouldn’t encounter in my normal day-to-day goings-on.

They’re my sports, or at least my pro wrestling.

I live under no grand delusions; I know that reality television is highly edited and produced, so the R-E-A-L should really be in quotes. Really, most of my television obsessions are more pro wrestling than pro baseball.

Regardless, a squabble over who sits where at a dinner party seems something as worthy of Monday morning quarterbacking as, well, actual quarterbacking.

I may not be a scholar of sports, so I feel unable and disinterested in discussing and rehashing with any authority.

If you ignore the pesky training and talent factors, there is a lot of commonality between athletes and reality stars.

They’re both big fish in small ponds until they are plucked from obscurity and put on display to the masses. They fight for airtime/playtime and, if not careful, can get embroiled in scandals. Once they choose to “retire,” their successes lead to promotional opportunities, hosting gigs, acting roles, and business ventures.

Like fantasy football, It’s an investment of time and energy to something that is fairly frivolous in the grand scheme — but one involves more catfights and fewer head injuries (probably).

Just as some people buy extended sports cable packages or listen to sports talk radio on their daily commute, I admittedly subscribe to multiple reality TV specific podcasts, read the humorous next-day recaps online, and can discuss my hypothetical Bachelor brackets for hours without struggling for new stats and predictions.

We all just direct our fervor to different places.

I don’t know the starting lineup for any NFL team, but I can name all the 19 Duggar children (and likely in birth order if I tried hard enough).

Maybe I shouldn’t be so analytical or feel the need to defend my leisure pursuits.

Maybe I should live by the code penned in the early 80s by Alan Thicke: The world don’t move to the beat of just one drum/What might be right for you/Might not be right for some.

It’s clear that what’s right for me is the trashiest of reality TV.