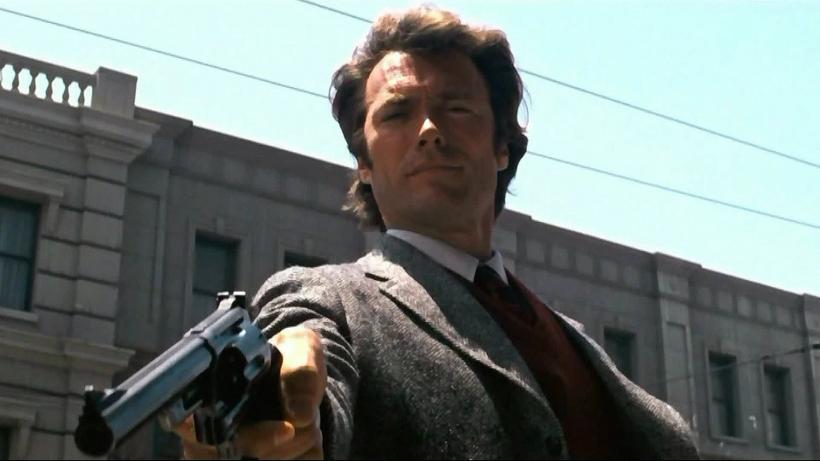 Dirty Harry may be a highly entertaining character, but he is not a role model I would want my son to emulate. Image: Warner Brothers.

Men are no more hard-wired to be one-dimensional, emotionless automatons than women are.

Is there any character more beloved and iconic in classic American cinema than the Tough Guy?

More actors than I can name made their careers playing the sort of man who solves problems with stoic brutality: Steve McQueen, Charles Bronson, John Wayne, Humphrey Bogart, and Clint Eastwood are just a few that spring to mind. Some of the most beloved characters ever committed to celluloid — James Bond, Dirty Harry, Rambo — are dyed-in-the-wool tough guys who will stop at nothing to see a perceived justice served.

I came of age in the 80s, when an interesting shift started to happen in the legendary world of tough guys; suddenly, vulnerabilities started to emerge. Indiana Jones was afraid of snakes, John McClane was still in love with his estranged wife, and even James Bond had his “license to kill” revoked for letting emotion get in the way of his sworn duties. On TV, this trend was even more pronounced; Magnum P.I., Remington Steele and MacGyver were just a few of the kinder, gentler tough guys keeping the world safe on the small screen.

But the show that perhaps epitomized a “new world” tough guy was The Greatest American Hero. Ralph, a soft spoken, mild mannered high school teacher is handpicked by a superior race of aliens to fulfill the destiny of the title role. Unfortunately, in his understandable state of shock and awe, Ralph immediately loses the instruction booklet explaining how to utilize the super powers the suit the aliens have given him can endow.

And so he must become the greatest American hero by a messy and dangerous path of trial and error; he is as often a victim of the suit’s powers as an enactor of them. He gets frustrated, he is often fearful; the desire to quit is overwhelming, but he perseveres. He is coded for heroism and cannot cede this opportunity to set at least some of the wrongs of the world right.

As Americans, we have been taught to revere the kind of impervious toughness the classic film characters represent; emotion is weakness, indecisiveness is fatal. This is the bar set for men who, like Ralph, feel coded for heroism. However, any meaningful attempt to meet this standard is more than likely to leave most men, again like Ralph, feeling like they have lost the instruction booklet.

Men are no more hard-wired to be one-dimensional, resolute, emotionless automatons than women are.

Perhaps in a tip-of-the-hat to this reality, another fad of 80s cinema was the tough guy who was in fact a machine, as in Robocop, and the Terminator films. Still, the message of these films is a powerful one in the canon of “tough guy” movies: even machines can have moral imperatives.

Even machines can be influenced by emotions.

This may have been a beginning of the dismantling of tough guy veneration, perhaps. Dirty Harry may be a highly entertaining character, but he is not a role model I would want my son to emulate. Young boys and men exposed to these sorts of stereotypes must be somewhat shaken to discover how little their inner life resembles this representation of heroism. In order to mimic the external impassiveness of these so-called heroes, how much of their true selves must they deny?

One of my favorite shows now is Sherlock on Masterpiece Classics; his brains-over-brawn approach to crime fighting never ceases to delight me. It is interesting to note that while Sherlock is an old-fashioned “tough guy” in the sense that his hyper-intelligent, emotionless reasoning has rendered him nearly invulnerable and so far unbeatable, the character is also consistently called out on his stoicism. There is no pretense surrounding the fact that the inability to make and maintain healthy emotional bonds is NOT considered a good or desirable trait. In Sherlock’s case, however, it is simply how he is wired. And he is using his unusual wiring for the greatest good he can personally imagine.

Another show I love that is currently addressing the questionable value of the “tough guy” is The Walking Dead. Rick Grimes, our resident alpha male and all-around-good-guy seemed, in this last season, to have finally succumbed to the elements of his environment. His compassion and hope having been endlessly trounced by the worst sort of elements, he began to subscribing to a might-makes-right and to-the-winner-the-spoils mentality. This turn on his path was not rewarded, however; Rick was forced to face the reality that no matter how brutal, how cold and how calculating you become there will ALWAYS be someone bigger and badder than you waiting to teach you a lesson. In Rick’s case, a devastating and irrevocable lesson at that.

This is the lesson all tough guys must learn and why ultimately it is not a rewarding path. Now we will wait for Rick to realize that it is his integrity and the loyalty it has inspired in his followers that will be his winning tool in this latest battle, not his toughness.

How many men can relate to such a journey?

It is time to relegate “the tough guy” to the realm in which he belongs: fiction. For real men trying to live a healthy and fulfilling life, he is not a worthy hero. By allowing for the healthy expression of emotion, the freedom to say “I don’t know (but I will use all of my sensory input to come to a reasonable conclusion)” and dispensing with the idea that vulnerability is somehow unnatural, men can come into the fullest expression of themselves. True heroism is the ability to demonstrate the inner imperatives we all have while maintaining flexibility and compassion for others.

If you like this article, please share it! Your clicks keep us alive!
Tags
toxic masculinity
hegemonic masculinity
maculinity in the media
men
role model
feminism is for men too
Boys
emotions
vulnerability
films
compassion