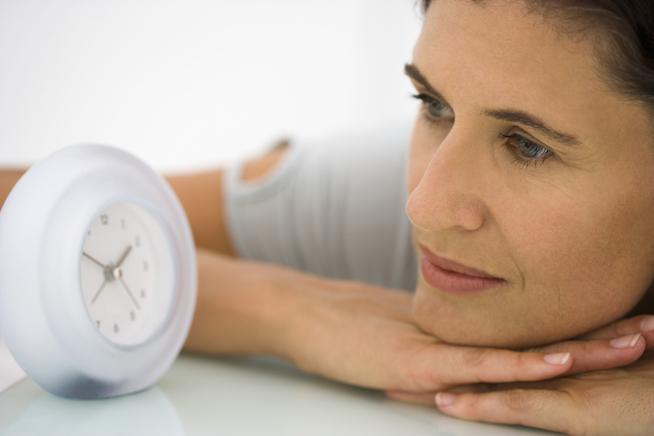 My biological clock, it ticks.

As much as I love to shop, browsing through products with names like FERTINATAL® offers none of the fun of trying on dresses and twirling around in front of the mirror.

For my 40th birthday, I bought myself a $200+ fertility monitor. No, it’s not a glamorous gift, or one I’m particularly proud of — and it’s definitely not something I’d ever ask anyone else to purchase for me — but it’s a symbol of investing in the only thing I truly want as I enter a new decade: a baby.

Yes, there are other ways to determine when I’m ovulating, but I both want and need all the help I can get in highlighting my fertile days. On the other hand, with a freelance income that fluctuates month to month, that’s a lot to spend, but it feels like the right thing to do, if only to make me feel like I’m being proactive.

Up until now, I’d assumed that getting pregnant would be a matter of time — and, well, sex. It took me the previous two years to convince my boyfriend, who’s never been as gung-ho on parenting as I am, to give it a shot. I’d assumed that would be my biggest hurdle, and that once he agreed to stop pulling out, we’d be one of those couples who beat the infertility odds.

I hoped that even though I only started down this path last year, at the tail end of 38, nature would kick in if I simply wished hard enough. Foolish? Perhaps, but the mere idea of wading into the morass of fertility treatments and products seemed so utterly daunting that I put it off and off and off, until I simply couldn’t live with ignoring it any more.

Thankfully, I live near a fertility specialist’s office. Less promising is the fact that my insurance plan, which I’m eligible for as my boyfriend’s domestic partner under his full-time job, will only cover basic lab work, but nothing specifically related to fertility. I’m in the middle of undergoing those tests that will be reimbursed (as is my partner), and once those are completed, the doctor will advise me what my options are — likely fertility-enhancing drugs such as Clomid, or IVF (in vitro fertilization). If I decide to go one of those routes, I will probably have to use a credit card.

While I await my doctor’s advice, I’ve finally delved into the wide world of fertility-enhancing items. Much as I love to shop, browsing through products with names like FERTINATAL® offers none of the fun of trying on dresses and twirling around in front of the mirror. Instead it feels more like my future depends on every product I purchase — or don’t.

Wanting a baby can make you crazy — with desire, with need, with jealousy, and most of all, with options. Things I’d normally scoff at as ridiculous have come to seem perfectly reasonable. I’m writing this with my belly warm after drinking FertiliTea, which bills itself as “natural, healthful — and delicious — herbal tea designed to support the entire reproductive system and help increase your chances of conceiving.” Desperate times call for swallowing my skepticism.

Here I have to admit that, while I feel overwhelmed by what to do next, I also know I’ve really only skimmed the very surface of what many women go through. Truthfully, even though I’ve been officially “trying” since October 2014, I admit my efforts have been on the minimal side. Beyond having unprotected sex with my boyfriend on a regular basis, I hadn’t done much until recently, certainly not the requisite charting Toni Weschler’s Taking Charge of Your Fertility — aka, the book everyone I’ve discussed this topic with insisted I read and follow— recommends (hence why I treated myself to the fertility monitor).

Charting — keeping track of your fertility by tracking your basal body temperature and analyzing your cervical mucus— keeps going on my to-do list, but never quite getting done. Deep down, deeper than I feel comfortable even admitting, I’m terrified that it’s simply too late. Maybe there’s a part of me that’s been half-assing my efforts so that if I don’t get pregnant, I won’t feel quite so crushed.

The truth is, adding “get knocked up” to my to-do list has felt like an almost dizzyingly impossible task, one that seems to require me making it not just my priority, but my full-time job. If I could afford to give up my real work, freelance writing, I would, at least temporarily — it would certainly decrease my stress level — but I can’t afford to. Plus, I would probably go stir-crazy wondering if every hunger pang, faint twinge, or pee break meant I was pregnant. Instead, I’ve been researching the offerings that can supposedly help a woman of my “advanced maternal age” (over 35) in my quest.

And you know what? It’s a jungle out there. The products that prey on women’s baby fever are myriad. The site twoweekwait.com, which has a trying to conceive message board, also hosts ads for a “Baby-making iPhone fertility monitor” and FertileCM, a supplement meant to improve my cervical mucus quality and quantity. Rather than literally buying any item with “baby” or “fertile” in the title, I’ve selectively entered the fray.

I’ve tried PreSeed, a supposedly “fertility friendly” personal lubricant, during sex, but my partner and I didn’t like the way it felt, so we went back to our old standby. For a few months, I was dabbing my saliva onto a Fertile-Focus “personal ovulation microscope,” which is supposed to be able to show you when you’re fertile via a process called ferning. I gave up after the expected patterns stopped forming. Yes, I’m impatient, which I know may be my undoing in what could be a long, long process.

For me, word-of-mouth goes a long way, absent of other reliable sources of information. I immediately purchased the tea after a friend who had two kids in her early 40s told me she has friends who’ve successfully used it, even though I’m not sure how they know it was the tea that did the trick. For $14.95, it seemed like a cheap no-brainer, and thankfully, it didn’t taste like medicine, but like a fancy herbal tea, which I suppose it was.

If I truly believed I could simply buy my way to motherhood, though, I’d have maxed out my credit cards long ago. I suspect, however, that many of these products are simply too good to be true. They may work for a small group of women, but they aren’t a pregnancy panacea. I’m wary about items like PregPrep, with its adorable diapered babies smiling at me on its homepage, urging me to “be proactive” and use a kit that allows women “to take charge of their conception and optimize their chance.” I suspect that it can’t really be as simple as popping a pill every day...but maybe it is, which leads me to feel guilty for not shelling out the $29.99 to test it out.

Perhaps I should have majored in biology in college just to understand what my chances of conceiving are via any of these methods. For instance, Premama touts that their Reproductive Support Supplement is “formulated with Myo-Inositol, which is clinically shown to help improve ovulatory function and egg quality.” Great — but what does that really mean? The more I research, the more daunting, and stressful, the process seems. Maybe, on some level, my naïve ignorance about my aging eggs was its own kind of bliss.

Part of my problem lies in the fact that I don’t feel like I have many people to ask. Many of my friends have offered well-meaning but bordering-on-offensive advice. On a recent visit with a friend and her toddler, she told me, “You should totally do IVF,” with the rock-solid assurance of someone who doesn’t have to pay for said procedure.

Yes, it helps that celebrities like Chrissie Teigen and Tyra Banks are talking openly about their fertility struggles, even though some of those statements are depressing, like Gabrielle Union telling Redbook that “The penance for being a career woman is barrenness.” I gasped a little when I read that Ilyse Hogue, president of NARAL Pro-Choice America, said she “felt like a failure” after she had two miscarriages. But still, I want to keep trying until I’ve exhausted all my options (yes, I’ve considered adoption, but am not ready to explore it until I’m sure I can’t get pregnant).

Every time I’m faced with another decision of what to purchase/ingest/attempt, I wonder if I should give up when I’ve barely started, if only to fend off spending thousands of dollars and having my heart broken by disappointment if things don’t work out. I’m not saying I expect it to be a snap to get pregnant in my early 40s, even though I know plenty of women who’ve done it and were perfectly healthy. I do wish there were more definitive ways to tell the marketing hype from the scientifically sound when it comes to the fertility marketplace.

If I do become a mom, I’ll want to make sure my child knows I’d do anything for them. Right now, however, I’m not exactly sure how far that “anything” extends. It’s not just a matter of money, but time and emotional effort. I don’t want a hypothetical pregnancy to take over my in-the-here-and-now life — or relationship. It’s easy to say I want a baby, but making one, so far, is proving to be one of the most challenging things I’ve ever tried to do.

If you like this article, please share it! Your clicks keep us alive!
Tags
pregnancy
over 40
how to
fertility

How I Manage My Social Media Anxiety
Rachel Kramer Bussel