Why I Gave Up Lent For Lent 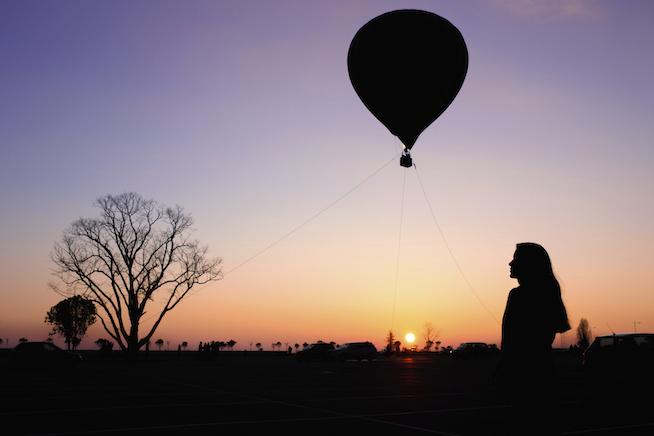 Lent was when everyone admitted that you were supposed to suffer, and my constant inner struggles with church and my body and my brain could come out and breathe in the heavy, ashy air.

If fasting and denying ourselves is supposed to give us stronger faith, imagine what it would be like if, instead of starving, we lived life in the fullness of who we are.

Hot air balloon rides. That was my family’s traditional joking deflection of the ubiquitous annual question: “What are you giving up for Lent this year?” We thought we were so clever.

But aside from my family’s weird sense of humor, Lent is serious. I mean, it starts with people putting ashes on their faces while someone chants, "Remember you are dust, and to dust you shall return," and then it ends with Jesus being tortured to death and then coming back to life.

Yikes. I mean, I know we don’t have the monopoly on intense religious traditions, but dang, we Christians sure know how to party/freak out 6-year olds.

Perhaps Lent isn't the most familiar thing to people who grew up outside of Christian churches, but it was always one of my favorite times of the year. Sure, the Easter egg hunts and lacy dresses gave me warm fuzzy feelings when I was young — but as I aged, I felt like Lent understood me. (And yes, that is possibly the most emo thing I have ever said.)

As a young woman who struggled with everything from my faith to my weight, Lent was always a huge relief: the one time everyone else around me in church gave any indication that they, too, felt like it was hard to believe, hard to sacrifice their human impulses, hard to control their bodies and their hearts (and, perhaps, hard even to want to).

During Lent, I wasn’t some kind of freak for arguing constantly in Sunday school or refusing to eat my mom’s food because she had cooked it in butter. It was okay to skip dinner or burst into tears during worship service because I just did not feel the same/"right" feelings about God (as described in the songs), did not feel the right things in my body, did not feel right at all.

Because, in Lent, you’re not supposed to feel good. Lent was when everyone admitted that you were supposed to suffer, and my constant inner struggles with church and my body and my brain could come out and breathe in the heavy, ashy air.

People give up meatballs, chocolate, alcohol, Facebook, naps, and other worldly comforts for this deeply sacred annual liturgical season.  Usually people give up something for Lent that really matters to them, something they turn to for comfort or pleasure, something they want very badly. Candy. Dating. Swearing.

Point being, it’s supposed to hurt. That is what makes a sacrifice or a fast meaningful: Unless it costs us something, it’s not worthwhile.

So this year, I'm giving up Lent. For Lent.

No, but seriously. I am.

You could say my decision to give up Lent is a part of my enthusiasm to #ditchthediet2016, but it also goes deeper than that for me, because of my religious background. I'm taking the lesson of Lent to heart, and fasting from fasting.

By giving up Lent, I can feel the burden of gut-wrenching confusion lifting off of my shoulders.​

I know that sounds like another hot air balloon ride, but I mean it. And ironically, Lent is just about the hardest thing I've ever given up. It's way harder than that time I gave up movies for Lent, or the time I starved myself down to 100 pounds. In giving up Lent, I’m giving up the comfort and safety of one of my oldest habits: church.

But I think it's the best way to take care of myself and figure out what having faith actually means to me right now, because my only hope of finding meaningful faith again is actually through freedom and honesty — not through white-knuckling self-control, censorship, and forcing my body to jump through hoops.

Right now, for me, this is a radical act of healing. If fasting and denying ourselves is supposed to give us stronger faith, imagine what it would be like if, instead of starving, we lived life in the fullness of who we are.

Giving up Lent doesn’t mean that I am giving up on things that are important to me. It doesn’t mean I’m not thinking about belief. In fact, fasting from fasting is my way of clearing my mind of the junk, of all the chattering voices telling me what I’m supposed to do with my body and what I am supposed to feel about God.

By giving up Lent, I can feel the burden of gut-wrenching confusion lifting off my shoulders. Giving up fasting is letting me eat what I need to eat, when I need to eat it. It’s letting me face the fact that fasting would just be a way for me to try to control my weight instead of trying to reach heaven.

It’s me saying, Actually, Church, we’re not OK; it’s time for me to face the fact that my relationship with you isn’t healthy.

It’s me saying, Body, I love you, and instead of telling you what you’re going to do without right now whether you like it or not, I’m going to accept you as the most tangible part of me: my connection to life, my connection to myself and others.

It’s me realizing, Body, that because of these things, you are sacred unto yourself.

It’s me admitting to myself that I don’t have any interest in controlling or sacrificing myself; I want to be myself. It’s me feeling in my gut that being a feminist and having faith are not mutually exclusive, but that it’s OK that I don’t really know what that looks like for me yet. It’s knowing that, to move forward, I have to rise out of the ashes and do things differently.

If you like this article, please share it! Your clicks keep us alive!
Tags
Lent
eating disorder
self-care
religion
feminism