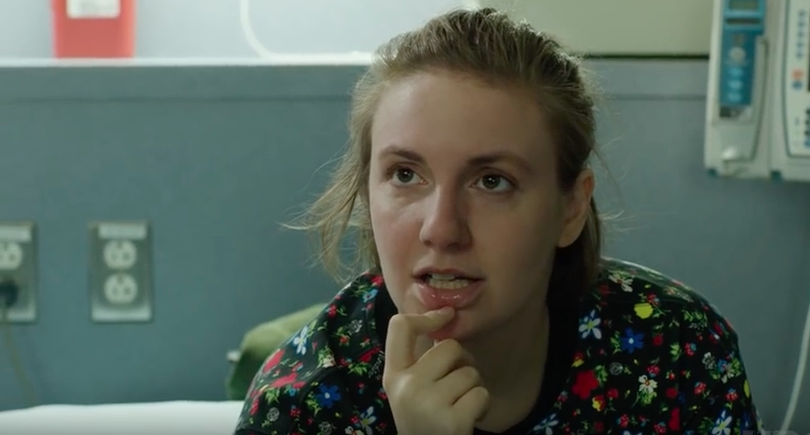 Over the years, Girls has been both praised and skewered for its niche portrayal of urban twenty-something life. Core to creator and executive producer Lena Dunham’s experience with Girls is backlash over a white-washed Brooklyn. I binged all the episodes last week and came to a weird conclusion.

The lack of girls who physically looked like me, a Chinese girl, on the show made me feel — good.

The feeling seemingly ignores the race in media conversation and goes against my own hope that television will have truly diverse characters. After all, I am physically ill thinking of The Great Wall, a movie currently in theaters, about a white man saving China from a dragon.

I say "I feel good" because I grew up believing my most painful moments were due to my Chinese-ness. I was acutely aware that my family was dysfunctional. I was anxious all the time, and I really felt if I were white and my hair was straight and shiny, that it would help me know what to say, and my life would be better.

Girls took the white girl and made her messy AF.

Marnie appears to have it all — looks, a great voice, guys who fall for her — but she makes narcissistic choices that make her feel terrible. Shoshanna is young and bright, but her post-grad life is challenging and lonely — assistant manager in the second biggest cat cafe in Tokyo aside. Jessa is so deadly sexy with her bad girl bold moves, but she loses friends like Shoshanna and Hannah who find her destructive. Hannah is a published writer with professor parents, but she isn’t always necessarily a redeemable character.

Girls doesn’t seek to portray anyone Lena doesn’t know intimately. Maybe we can’t rely on her to represent the characters we don’t see in media. Girls may show a white world, but it’s not an empty world or story. In most tales, despite obstacles, the protagonist is right. In the case of Girls, as in life, we find out that sometimes it’s unclear if we’re right or if we’re just “dead inside” (like with Hannah as she reacts to her editor’s death).

So the girls on Girls are not woke, but maybe everyone shouldn’t try to be. Donald Glover said Lena did that purposefully. I have sought to be woke myself, and have always fallen short. I failed because I was pretending to be someone I thought was more relatable than myself. In college, I was a suburban girl trying to walk in the shoes of a low-income inner-city girl. I shudder at the hollowness of my actions.

Watching Shoshanna in the recent episode “Hostage Situation” get turned down in a professional event helped me stop making excuses for myself.

Lena Dunham solved one-half of the problem for me — she disassembled my view that my failures were because I wasn’t white.

Watching Girls, suddenly being whiter didn’t feel like the one solution that would solve everything. It wouldn’t solve loneliness, depression, the need to connect to purpose in the present. Now for the other half of the puzzle — building a new narrative up.

As the final season begins, Lena and Jenni Konner have acknowledged that they wouldn’t make Girls today in this political climate. Some topics need strong discourse that a show about speaking out couldn’t ignore. While Hannah does openly acknowledge how myopic her world can be in “Leave Me Alone” in Season 1 and again in “Cubbies” in Season 4, she was never meant to be the only voice of her generation. Lena says in a Q on CBC interview that her pilot words will likely follow her to the grave, but that her character was pointedly on drugs when she said them. Girls starts the conversation of representation, rather than tries to end it. Its latest episode, “American Bitch,” takes ownership of how it’s been viewed as a document of the modern world.

The Writer’s Guild in Los Angeles recently held an event on race and television called Crime: Causes and Effects of Mass Incarceration. The panel was on the intersection of storytelling and current events. Writer/Producer Carlito Rodriguez, who has Empire among his credits, said he wants to create, “Characters who wake up one day and realize who they are, like a fish that wakes up and realizes it’s in the fish tank. [To] have narrative where we see individual change, when someone sees things aren’t black and white.”

I don’t know what Carlito thinks of Girls. For all I know, he could disagree with its representation as well. I belive that in this sense, the characters of Girls are a solid commentary of awakening to one’s own contradictions.

A lot of the conversation about representation in Lena’s work took place in interviews from 2014. Rebecca Carroll wrote, “It is absurd and frankly racist that the literary world's axis is now set to spin based on whatever utterances are made by a 20-something white woman who grew up in wealth...”

But three years later the world hasn’t been built in the image of Girls. The emotional connection those characters gave us led us to drive towards more connection in physical representation on screen. The literary axis did not stop at Lena and worship her whiteness to the ethers. Instead, it built upon the work she has done by asking new questions.

For me, Girls provided the vocabulary to talk about mental illness, uncomfortable situations, and behaviorisms once thought too dark to share.

We continue to need new vocabulary to describe what isn’t touched on with Girls — like Issa Rae does in the pilot of Insecure. Her character faces a class of students who ask why she “talks white,” to which she tries to express who she is. Issa gave us another way to speak about what is hard to find words for. The lack of a familiar face in Girls today leaves space for all the stories yet untold. Now I’m hungry for those tales, and Girls prepared us to create what is to come.

Can Leaving Me Out Of "Girls" Be A Good Thing?
Sherry Yang