On Feminist Nights, Self-Care, And The Importance of Female Friendship 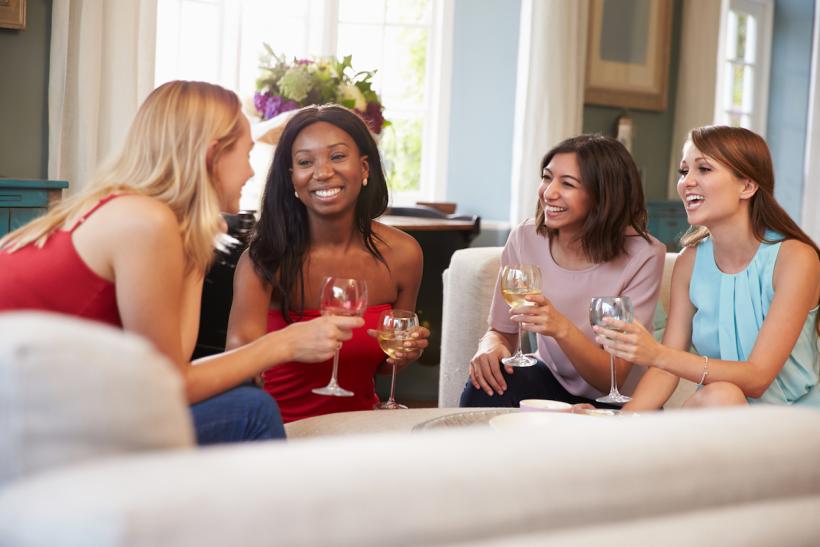 I need these nights now more than ever.

As all good things do, it started with a rant, the Dixie Chicks, and three glasses of wine.

“Let me READ you what this Bernie bro wrote on Facebook,” Eva said, setting her glass on the table by the stem, cheeks flushed.

This was back when the sexist antics of (some) Bernie bros seemed like the worst thing our country had to offer. We leaned in, our faces contorting with disgust as she read, and for once, we didn’t have to hide it.

“At work today,” my other friend, Anna, proclaimed, “This guy made an announcement that everyone is just voting for her because she’s a woman. And I do mean announcement. He just, like, announced it in the conference room like he was giving the King’s speech or something.”

We all shook our heads.

“God, that’s so typical!” I swallowed the remaining contents of my glass. “She’s scrutinized so much more heavily because she’s a woman. Her womanhood is literally stacked against her.”

“Here’s the thing,” Eva laughed. (Eva knows more about politics than any of us. She’s Janet from The Good Place, but instead of being a human Wikipedia on the afterlife, she is our resident political connoisseur. ) “To blame the 'establishment' for electing her and not electing Bernie is laughable because his whole anti-establishment shtick is what gave him momentum in the first place. That’s his angle.”

And so it went. The wine kept flowing, as we vented, laughed, and screamed every emotion we’d kept bottled up that week.

Gradually, the conversation shifted away from politics, as Eva’s little sister began to show us some of the messages she’d received on Tinder.

“Whatever you’re probably a lesbian anyway,” she read aloud — the result when she refrained from answering a message for more than 30 minutes.

She glanced up at us, sipping her gin and tonic, and grinned. “I mean, I’m bisexual, but yeah, dude, if I don’t like you, it’s because you genuinely suck.”

“Drag him!” We all cried together, then collapsed into giggles.

“Honestly,” she held her arms out dramatically, as if golden sleeves were sashaying down from her elbows, “I have never met a man who was worthy of me.”

We all clapped, tittering with laughter. I smiled freely, nestled into this space where my mom wasn’t telling me to stop saying anything negative about men “so they don’t feel bad,” where my brothers weren’t uber-defensive when I called out the sexism inherent in our society.

At one point, Eva realized I had not read Gone Girl, and proceeded to pull up the “cool girl” clip online, mouthing along to every word as I watched, wide-eyed with recognition.

Whenever anyone made a comment about drinking too much wine, work early in the morning, or the sheer number of sour straws we were eating, everyone would shake their heads emphatically, interrupting: “Self-care!”

It seemed like a joke at the time, but that is exactly what this group of disillusioned, floundering 20-somethings, gazing forward at a world we weren’t sure we wanted to be a part of, needed. It’s trying for anyone to maintain hope right now, ourselves included despite our collective privilege.

After He-Who-Must-Not-Be-Named had been elected, we fell into each other for some semblance of comfort. We traded gifs of Justin Trudeau. When we saw each other in person, we scanned each other carefully.

“Are you holding up okay?”

Eva swallowed. “Me too.” She shrugged off her coat.

A beat of silence.

Eva laughed. “Oh, thank you, thank you! You are too good to me.”

While our conversations shifted to a darker place, the fundamental things still applied. We read feminist prose and Cheryl Strayed articles to one another. We talked about internalized sexism at work. We violently rooted for Rachel on The Bachelor. Eva explained her idea for a gender reveal party if she ever were to get pregnant, which involved a rainbow piñata and a lecture about the constraints of society.

I need these nights now more than ever.

After that first night, I lingered by the door, cheeks sore from laughing, feeling more relaxed, more myself, than I had in ages.

“Can we do…whatever this was…again?” I asked hopefully.

They grinned back at me.