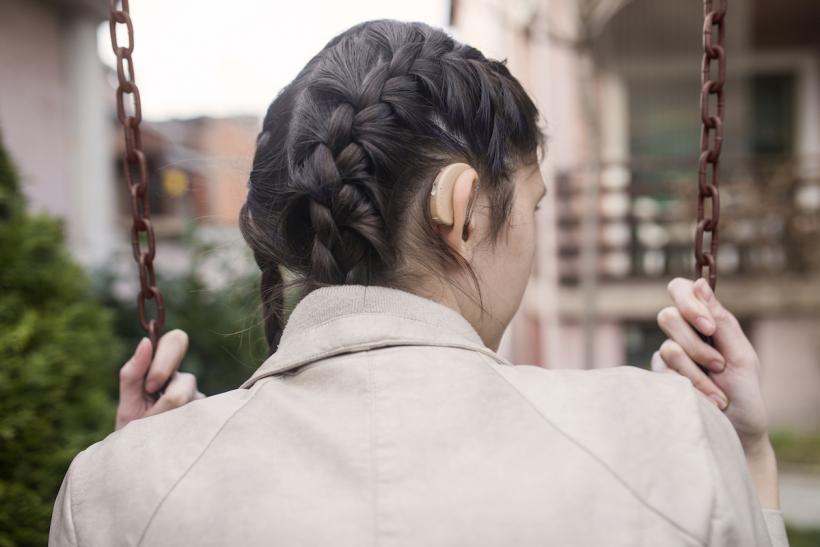 I am not in the demographic you might assume for someone who needs hearing aids: I’m 30, I’m a writer and performer, and I play roller derby.

About three-fourths of the time, it would appear that I don’t have a visible disability. By all bullshitty societal standards, I’m an average-looking cis white lady with blonde, curly hair and a body type that is not outside of what we’ve been force-fed as “normal.” I would say I have a healthy sense of body image, but there are times when all of this is called into question. It’s on the rare occasions when I have my long, thick curls pulled up in a messy bun, and I can see strangers’ eyes dart to my over-the-ear hearing aids. I make a note of that flicker of curiosity, and I have to remember that most people aren’t used to seeing anyone under the age of 50 with hearing loss.

I’m not ashamed of my disability, nor am I necessarily proud of it — it’s just something that is, and has always been. I don’t mind talking about it, at least not to people who aren’t rude or invasive of my privacy.

I am not in the demographic you might assume for someone who needs hearing aids: I’m 30, I’m a writer and performer, and I play roller derby. But I’ve been hearing impaired my entire life, and hearing aids have helped me every day since I was a teenager. I’m grateful for them, and I’m glad that the technology behind them is always improving, expensive as it may be. I wish more people knew that hearing loss doesn’t always just impact an older population, like they think it does. Thank God, at least, for the TV show, Switched At Birth, which portrays several d/Deaf and hard of hearing young people! I’d love to see more representations like that on my screen.

Whether I like it or not, hearing loss has always been a part of my identity and hearing aids are now a part of my body image.

I’m not ashamed of my disability, nor am I necessarily proud of it — it’s just something that is, and has always been. I don’t mind talking about it, at least not to people who aren’t rude or invasive of my privacy. Because I’m young, many people assume my hearing loss must have been caused by some sort of trauma, and you’d be amazed at how comfortable some feel asking me about it. For the record, it wasn’t — I was born with moderate to severe hearing loss, and I’ve been plagued by ear infections and cholesteatoma my whole life. I’ve had more ear surgeries than I can count, and there will be more in my future.

When I got my first pair of hearing aids as a high school student, I was self-conscious of them like most teenagers would probably be. At the time, I went with the boring white person skin-toned option, and I don’t even remember if other color choices were presented to me. My first set felt bulky, and they whistled every time my first boyfriend hugged me or got too close. I’m sure my parents were thrilled about this bonus feature. But by the time I needed my second set when I was in college, I knew how much better my life was with hearing aids. I was proud of them and unembarrassed by my hearing loss. I’d since decided that if anyone I ran into had a problem with my hearing level, that person was a douche bag and I was better off without them in my life. I’m proud to say I’ve very rarely interacted with such people.

I have to buy new hearing aids every five years because that’s about the extent of the tech’s shelf life, and I’m currently in the process of choosing my next set. Every time I go in to look at my options, my audiologist immediately directs me to the models that either blend in with my skin tone or my hair.

This assumption that I would want to hide my hearing aids always feels to me like a hint that I should be embarrassed by my disability — but I have no intention of keeping it a secret.

Again, because I like to wear my hair down, it usually covers my hearing aids, but that’s never intentional.

Whenever I’m pointed toward the low-key models meant to blend in, I veer away instead toward the wildest colors the new tech has to offer. Last time that meant silver and black. This time, if I’m lucky, it could mean lilac or midnight blue. I’d cover them in gold lightning bolt stickers, if I could.

When new people in my life learn that I use hearing aids, they’re often surprised. They typically tell me they had no idea, intending to compliment me for passing as a fully-hearing person. Usually, to be polite, I’ll say thank you, but what I really want to say is that a lot of assumptions are made about the hearing impaired. It’s widely believed that only the elderly need or benefit from hearing aids. On top of this, most people don’t know that hearing aids are widely not covered by most health insurance plans, although many states dictate that some coverage must be offered to minors. I think this is because they’re so widely considered the exception, the rare few with special needs. However, this feels to me like a sad commentary on how our society views the importance of good quality of life for our seniors. If more people like me needed hearing aids, more attention would be paid to the issue.

I don’t wish hearing impairment on anyone, but I do wish more people were thoughtful of that fact that anyone can have hearing loss, regardless of age.

Someday I believe hard of hearing and Deaf people will be portrayed in the media regularly enough to the point where I don’t catch those surprised looks on people’s faces the minute I pull my hair back. I love my body, and I love my hearing aids. I’ve come to terms with how both serve me, and how I can work hard to make sure they keep working well for me.

If you like this article, please share it! Your clicks keep us alive!
Tags
hearing loss
disability
hearing impaired
Deaf
HOH
body image