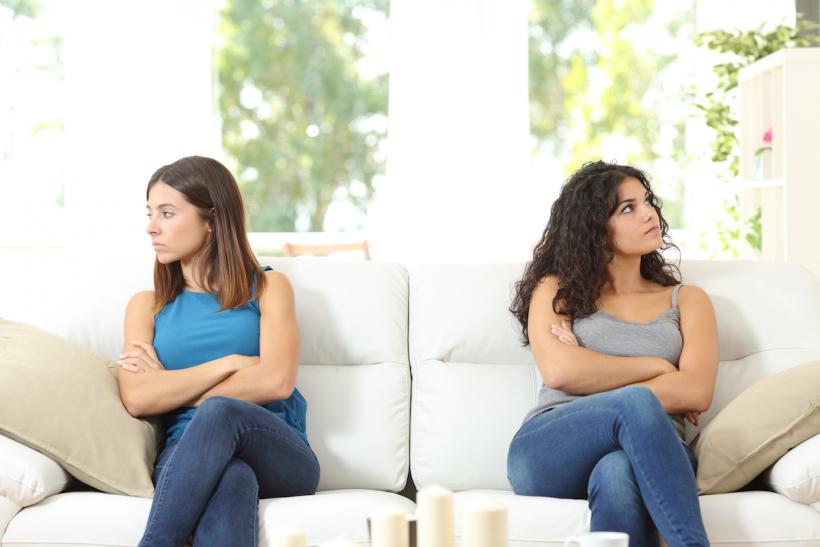 t is unrealistic to expect friends always to agree — and wouldn’t that be boring?

When I took on this assignment to write about the traumatizing byproduct our polarized political landscape has had on personal relationships — with polls estimating tension is the new normal between family and/or friends for nearly 40% of Americans — I smugly thought this trend didn’t impact me. The important people in my life felt equally horrified at the results of the election. But a few hours after an article of mine posted, outlining the efforts many therapists are making to have Trump’s glaring mental issues taken seriously, one of my closest friends (not a Trump supporter) texted me, canceling our upcoming plans. Also a therapist, she stressed that she loved me but felt angered with my public stance and felt we shouldn’t see each other until the political climate becomes less toxic.

I was still the same person. I hadn’t done anything personally to her. WTF! My initial sense of abandonment and outrage morphed into a chronic hum of sadness. There is no enemy here. Both perspectives are worthy of respect and consideration. What rightly sickens my friend is the extremism exhibited by both sides — the hate and brutal labeling of ‘the other’ that is causing mass anxiety, contempt, discord and what feels like an ever-widening divide in our country’s political discourse.

On a personal level, how can this viciousness have anything but a cataclysmic effect on personal relationships? In instances where people’s core values, beliefs, and goals are almost cartoonishly opposed, building a bridge, at least for now, seems impossible. But for those who have a foundation of love, kindness, and respect, hopefully, some rifts might be lessened if not ultimately healed by following these steps.

This tip involves avoiding the elephant in the room. Both people must limit their exposure to one another’s politics. For a woman I’ll call Jennifer, the stakes are high. She and her oldest friend are connected “on a heart level.” While the childhood friends have little in common regarding professions or interests, they’ve always been in one another’s corner. Their political leanings are sharply discordant. Jennifer explains of her friend, here referred to as Anne, “She was the only conservative in a family of liberals, and I felt bad for Anne that her sisters jumped all over her, causing her pain.”

Last year Anne revealed she was a Trump supporter. Jennifer says, “When your nearest and dearest keeps repeating the talking points on Breitbart and Fox like ‘environmental deregulation is good for the country,' it’s brutal.”

Their friendship survived the election, the bridge too far arriving when Anne posted on Facebook that “all those liberals protesting out there are violent.”

Jennifer instantly DM’ed her friend that the women’s march in Washington, DC had been peaceful. Anne’s cyber response was a snarky comment about Jennifer’s recent post comparing Hitler to Trump.

After a few more increasingly heated back and forth angry keystrokes, the two came to a wise decision: to unfriend each other on Facebook. “This way we can share the stuff that feels comfortable in private and unload our political frustration online to a pre-selected audience who appreciates our uncensored ravings,” explains Jennifer.

One of the saddest parts of the tsunami wreaking havoc on our country is the lack of civility on both sides. Democrats and Trump voters sometimes speak of one another like the devil incarnate — Deplorable is among the most measured terms batted about on social media.

It is unrealistic to expect friends always to agree — and wouldn’t that be boring? If the only people we associate with embrace with fervor every utterance out of our mouths, we will never grow as human beings.

Watching the talking heads on cable television bark over one another’s words and make derisive gestures while their ‘opponent’ is talking, I feel like I’m watching kids in a sandbox sticking their tongues out at one another. Children are cute; adults who act like children not so much.

A patient, I’ll call Tina, was in despair because she and a beloved cousin were at political odds. Tina confessed during a session, “I called her racist, and she hung up on me.” Tina admitted that her frustration and fear over the ugliness she reads about everyday impacted the way she addressed a person she knows in her heart does not regard those with different skin color as lesser. “My cousin adopted twins from Nigeria 10 years ago! How could I have said such an ugly thing?”

I suggested Tina call to apologize. I also suggested that from now on, before impulsively spewing something in anger, to take a five-second pause to ask herself, "Will I regret saying this?" If the answer is yes, resist the impulse.

Tina took my advice. Nowadays, when the cousins talk if the topic is sensitive, they agree to disagree.

Perhaps my most important piece of advice is to listen. Not give lip service, not do what the majority of those talking heads do on TV, but actually give the gift of an open mind and mentally unclogged ears when someone who thinks differently than you is talking.

Longtime friends, I will call Beth and Joann, came to see me because they despaired that their opposing political ideologies were eroding their bond. Each said something analogous to, "How is it possible that such a smart, sensible, caring person like my buddy has such despicable views? How can I continue to have her in my life?"

I did an exercise with them I often use with couples called “mirroring.” First, Beth spoke about her feelings and beliefs, not in an accusing way but in a contemplative, vulnerable ‘this is what makes me tick’ mode. During Beth’s monologue, Joann was instructed not to interrupt but just listen. When Beth finished, Joann could not rebut or put her own spin on what she’d heard, but just summarize: “So it sounds like you feel A and B and C.” Beth corrected her: “I feel A but not B or C. It’s more like this…”

The women went back and forth until Beth felt understood by Joann. That doesn’t mean Joann agreed with everything her friend said, but she heard it. Then the women reversed roles. Once both felt true empathy for the other’s point of view, real dialogue could begin.

While this type of reflection and connection is not easy to achieve, it is the bedrock of acceptance, connection, and, hopefully, mutual learning.

Four days after my friend said she didn’t feel we should get together until the political climate change, she texted, “So are we still seeing each other together Tuesday?”

Bemused but hopeful I texted back, “I thought you didn’t want to see me until the political climate changed?”

She texted back, “Can’t besties sometimes have a disagreement? Big deal.”

If you like this article, please share it! Your clicks keep us alive!
Tags
Trump
friendships
Friends
Politics
opinions
liberals

4 Ways To Become Your Own Best Friend
Sherry Amatenstein, LCSW

3 Things That Break My Heart As A Therapist
Sherry Amatenstein, LCSW