It's Not Me, It's You: My Breakup With Body Positivity 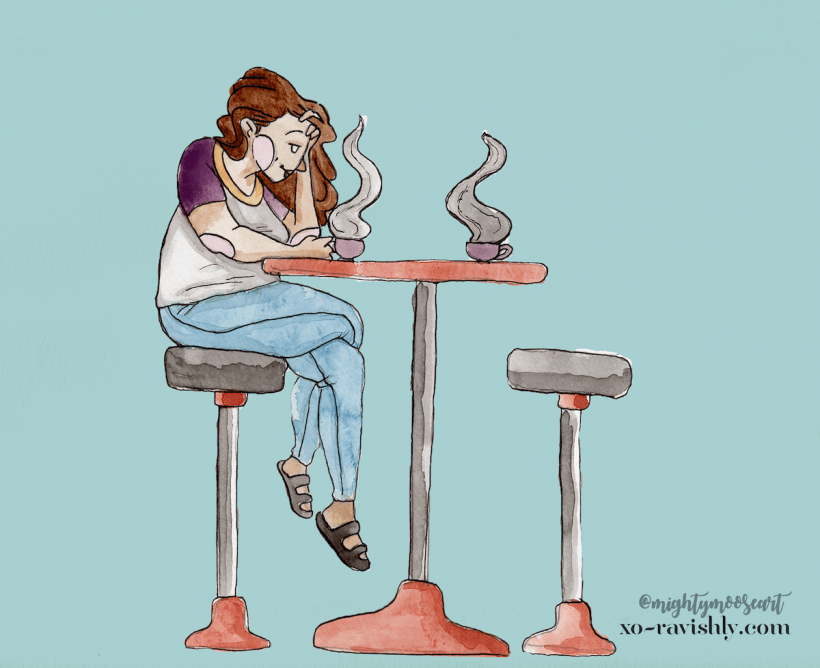 That’s the message that pops up in my notifications as I’m walking into a movie theater with my best friend. We are seeing Beauty And The Beast, and in 20 minutes we will both be sobbing in our side-by-side theater recliners, remembering our daughters playing Belle. But first, this message from another angry reader — another Facebook friend, another body positive activist who’s had enough of me and my dieting under the guise of body pos.

In October 2013, I fell down my stairs. When I landed at the bottom, 11 stairs down, my ankle was facing the wrong direction. I crawled around for a couple of months in a boot, and then I sort of gave up on healing. I sort of just gave up on myself.

Four months later, I was in New York City next to Rachael Ray on her oddly firm set sofa.

I wrote that being the thinnest I’d ever been didn’t deliver the happiness I thought would come with it. I wrote that it felt better to be fat and happy than it did to be thin and hungry.

For 18 months after my ankle injury, I wrote about my body. I wrote about loving it. I wrote about letting go. I ate cake with reckless abandon, exercised pretty much never, and generally cared for my body the way a mother of five might have a tendency to. I celebrated being “body positive” with an “I owe nothing to no one” attitude.

And I gained weight. And more weight. I was already fat; I layered on more fat. The increased fat brought increased ankle pain, and with it increased immobility.

Then I had a sudden onset of depression. My psychiatrist nudged me toward lab work and an MRI on the ankle. I ignored her for six months. I didn’t want to be faced with my fat and how it might be impacting me mentally or physically. I didn’t want to know what an MRI would reveal.

Then one day the depression turned into suicidal ideation, and wanting to die frightened me into compliance.

One day, being that kind of fat stopped working for me.

In June 2016,  I made a commitment to myself to honor my body. I completed the lab work. I saw my midwife. I began to feed my body well, with foods that give me energy. I found that “foods that give me energy” does not include huge slabs of buttercream frosted cake. I filled my body with the water I’ve deprived it of my entire life. I found exercise that I enjoy. I gave myself sleep. I stopped “pushing through.”

I hoped I’d feel better. I hoped the ankle I tore apart a year a half earlier would thank me.

I’ve managed my preoccupation with calorie/point counting using a combination of cognitive behavioral therapy, the highest dose of Zoloft, and the vivid memory of the misery that my disordered behavior caused.

I’ve managed my exercise bulimia with a gym routine, carefully crafted, down to the number of minutes on the Stairmaster (15), by my sweet trainer, Rodrigo. Rodrigo never measures me or mentions my weight. He never talks to me in gym-speak about “before and after.” Rodrigo knows there is only now for me.

When I saw my midwife again in October, I’d lost enough weight to prompt her to ask, “What have you been doing?” We talked about the labs, the renewed medication regimen, the gym, the water, the long overdue sleep. We talked about the eating disorder recovery.

She gave me a hug and a whisper of praise. “Good for you,” her voice laced with the sort of solidarity that only another middle-aged mother of multiple children can summon. Aging is hard. Aging with extra weight, often harder.

She never told me to lose weight; there was no mention of the bullshit BMI — no shaming, no diabetes discussion. Even after almost two years walking on a severe ankle injury with no resolution of pain, my orthopedic surgeon never told me to lose weight. Even after reviewing the X-ray of my disintegrating ankle, he didn’t mention my size, only a gentle reminder that weight equals pressure on the joints — especially knees and ankles.

No one told me to lose weight.

But they didn’t have to. No one had to tell me that if I was smaller, my ankle would probably feel better. I took physics; I’m a nurse.

In October, when I wrote that I’d lost 39 pounds, the body positivity community spoke. Loudly. The discussion of numbers was triggering, the suggestion of weight-loss as a factor of recovery — a false equivalence. Both chided: a disservice to those who can’t lose weight with simple behavior change, a disgrace to the community that had supported me in my declaration of “fat and happy.”

The detailing of my water and food consumption, my vastly improved sleep habits, my stress-management, my meds regimen — a source of false hope, in their estimation, served only as a suggestion of my sense of superiority, a celebration of my disordered behavior.

I lost a few followers there, the fat pos folks who didn’t want to hear the conflation of weight and health. I also gained a lot of folks, women like me, seeking some happy medium between #fitfam and #fearlessfatty.

I wrote about my conversations with women in the body pos community who are concerned about their weight. I wrote about the fear folks have of high blood pressure, insulin resistance, elevated A1Cs, family members dying from heart disease, suffering from complications of advanced, poorly managed diabetes. I wrote of people who say with fear, "I don’t want this for my life."

And then I wrote again — this time about the fear of a fellow fat person at my gym. I told of what this person shared with me while we pedaled our stationary bikes side by side. I wrote about my worry for another woman, one who disappears into the corner treadmill for hours. Pale, sallow, skin and bone, as a person who has struggled. As a nurse trained to see beyond what truths people are willing to share, I fear for her life.

I wrote about being “too fat” and being “too thin” and the mortality on both extreme sides of the weight spectrum. I wrote honestly for the people who find themselves alone in their fear.

I know that size is not the sole determining factor of health; I also know that it does matter. At some point, for many people, it matters a lot. I know this because my first-semester nursing school instructor made sure I would never forget it — but even more profoundly, I know this because I’ve seen it.

Being a hospice nurse offers an intimate window into the lives of families grieving the loss of their mother/sister/father/brother/child — cursing the cancer, cursing the cigarettes, cursing the heart disease, damning the diabetes, and with it the immobility, the loss of limb, sight, sensation.

Being a hospice nurse means seeing science and sadness in tandem; it means weeping with people you grow to love. It means watching those people die.

Yes, diets don’t work, and yes, the Health At Every Size model of care is sound, but still, there are people, real people whose bodies ache, whose lab work scares them, whose creeping blood pressure threatens their vessels and their lives. These people are the ones desperately trying to change, to prolong their lives, to chase their kids, to empty their medicine cabinet of the Lasix and the statins for their blood pressure, and the refrigerator of insulin for their diabetes.

I fell face first into the body pos community. I’d only barely heard of the movement when it embraced me. My unexpected before and after, proved that thin doesn’t equal happy, declared that fat can be freeing, gave me a place at the table; I was welcomed with open arms. In the safety of that space, I met women who would change my life. I made friends that were as precious as family.

And then I lost weight.

But I didn’t just lose weight, I also said, with delight, I can finally — after two years of braces and bandages, and ice packs and elevation, and instability and more than a few falls — walk without pain. I can follow my 16-year-old drum major son along parade routes miles long. I can fold my legs onto themselves in meditation. I can fit in the park swing, pumping my legs alongside my six-year-old daughter, kicking our feet high into the air, squealing at the height, laughing as we jump and fall into the bark below.

These are the results of caring for myself, truly prioritizing my wellness above all else. And yes, these are also the results of having a smaller, lighter body.

Body positivity began as a radical social movement screaming “my body, my business.” Then along the way, it became a place for folks to celebrate their body in whatever state. Now it feels more militant. It feels like it’s moving toward a community of folks who need to separate weight and wellness entirely.

It feels like a community that I don’t fit into now.

But there is another path, one being paved by people who need support and love as they try to make sense of the confusion that is living in a body in this culture. Another community of people, just seeking balance. People looking for ways to love their bodies and, borne of that love, a desire to change them.

These people aren’t hailing “healthy is the new skinny,” they are not claiming weight loss will cure all ills, they are just trying to live their best lives. These people need a space, too.

I think these are my people; I think I am their people. I think this is their community.

If you like this article, please share it! Your clicks keep us alive!
Tags
BBA
BB&A
Beyond Before & After
Body Positive
body positivity
fat positivity
activism