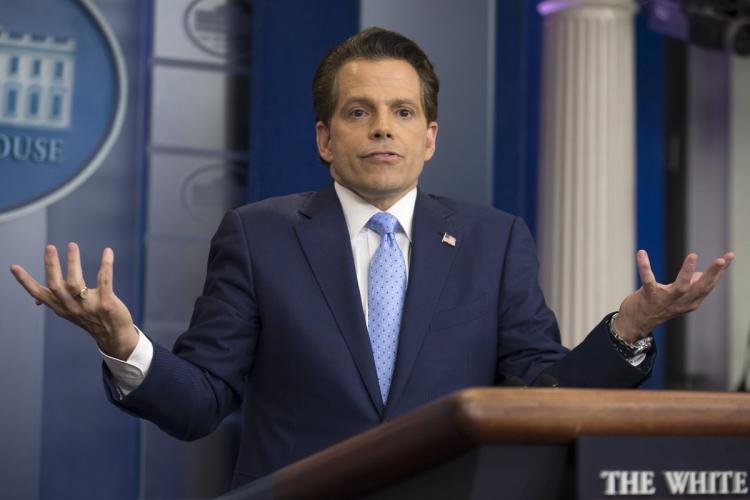 In The Newest Episode of The Apprentice: White House Edition, Anthony "The Mooch" Scaramucci is OUT!

RT if you've had a period that lasted longer than Scaramucci

Want to talk about a bad week? In an interview with The New Yorker, Scaramucci spoke with reporter Ryan Lizza and said some "colorful" things, such as:

And in regards to the constant leaks coming from within the Trump administration:

Do you speak to your mother with that mouth?

Then it was revealed his wife, Deidre, had filed for divorce during her 9th month of pregnancy with their newborn, James.

Now he's "resigned" from his job as Communications Director. Or was he fired? All I know was that he was escorted out of the joint in a hot minute.

I love the internet #Scaramucci pic.twitter.com/IFOHtpF9s7

*Aboard Plane to NYC*

THE MOOCH: Doesn't get worse than this

ANN COULTER: You're in my seat...#Scaramucci

So what exactly has lasted longer than Scaramucci's time in the White House? I can think of a few things!

After just 72 days of marriage, Kim and Kris called it quits on their (sham?) wedding.

OK, so it may not be the healthiest meal choice but these bad boys can last through an apocolypse. Scaramucci? Not so much!

3. That earworm of a song Despacito

It's been on the top of the music charts for over 11 weeks. ELEVEN WEEKS! Who knows where Scaramucci will be by then. Perhaps, and this is my idea so don't steal it, he and Sean Spicer should star in a revival of The Odd Couple. Just sayin'! Let's just hope it lasts more than one episode!

In an average lifetime, a person will sleep for 9,125 days. I believe it's time for Scaramucci to take a nap and rethink his goals, am I right?

5. Most Game of Thrones characters

Though the hit tv series is known to kill off fan favorite characters, they at least, most times, last longer than 10 days ... or episodes ... or whatever.

Either way, The Mooch is out. Hope you had him on your Bingo card!

If you like this article, please share it! Your clicks keep us alive!
Tags
white house
Trump
Scaramucci