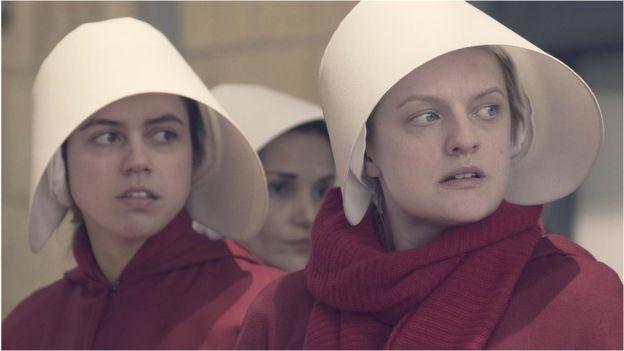 The Handmaid's Tale for real

The top news to drop today might be one of the worst things us lefty liberals have heard all week. Supreme Court Justice Kennedy is retiring.

God, Oprah, anyone save the country.

Look, he’s 81. I get it. He probably wants to trade in the gavel for a golf club (or a cane), whatever. The point is I know he probably has a very good reason for wanting to retire. The problem with this is he is a VERY IMPORTANT swing vote. Marriage rights for LGBTQ+ folks. Capital punishment. Affirmative action. OHMYGOD Abortion.

Kennedy, could you not just hang in for like three years? It’s not even that long. You can take a nap. Everyday. I will find someone to deliver tea warmed to your exact specifications and sweetened with locally made artisanal honey and a Centrum Silver multivitamin to your bench every day.

I have no doubt that Trump will pick the most conservative prick he can find for the job. This does not bode well for, well, anyone who isn’t a white dude.

Not to be an alarmist or anything, but you might have noticed this is just the most recent in a series of extra shitty things to happen under the Trump administration. Immigration checkpoints are popping up as far north as New York state, babies are being torn from their mothers for not having the right paperwork, and our attorney general is "generally" not about allowing asylum to victims of violence fleeing their home countries.

It's BAD, y'all. It's been bad for a long time, and all the shitty consequences of white supremacy, late- late- late-stage capitalism, and a patriarchy that just don't quit are bubbling up to the surface at once — all with the help of this swamp monster we call the Trump administration.

The possibility of yet another conservative Supreme Court justice added to a judicial branch that's already down with a Muslim travel ban and protecting bigoted bakers feels like the end of the world because, well, we're on the precipice of annihlation, babe. Buckle the f*ck up.

Welcome to The Handmaid's Tale.

Before we descend in the abyss that is a country run by nothing but the alt-right and its GOP underlings, here are some tips for what you might pack for the trip:

I mean. I’m the child of an alcoholic, I don’t usually advocate for drinking. But desperate times and all that.

It will probably become illegal because these people hate happiness.

Those will definitely be legal. But probably not readily available for anyone besides, again, rich old white dudes.

You’ll want a companion animal, but not a loud one. Draw too much attention to yourself and they’ll take your dog right along with your joy.

HAHAH. You want to date another woman. You’re funny.

Penis + vagina for the rest of your sexually dissatisfied life. The end.

You don’t want to be caught not blending in. That’s a path to certain death.

Also, it will hide your period. Because that's just gross.

8. A dagger and/or a wooden stake.

I hear once you get this far to the right, politicians can only be killed by driving a wooden stake directly through their very small hearts.

Because their hearts are very small, you might need to take them out first (thus the dagger).

But only in your brain because that shit is going to BURN. Say goodbye to all you favorite dead feminist writers. Sorry. Time to finally commit that mic-drop line from Three Guineas to memory so you can whisper it to yourself when they come for you in the night.

Don't want to go to Gilead or any other dystopian future? Register to vote. Then actually vote — for democrats. Please, for the love of human rights.

If you like this article, please share it! Your clicks keep us alive!
Tags
Supreme Court
Kennedy
justice
republicans
Trump
abortion
human rights