Take The Cake: I Accidentally Went On A Date With A “Clean Eater” 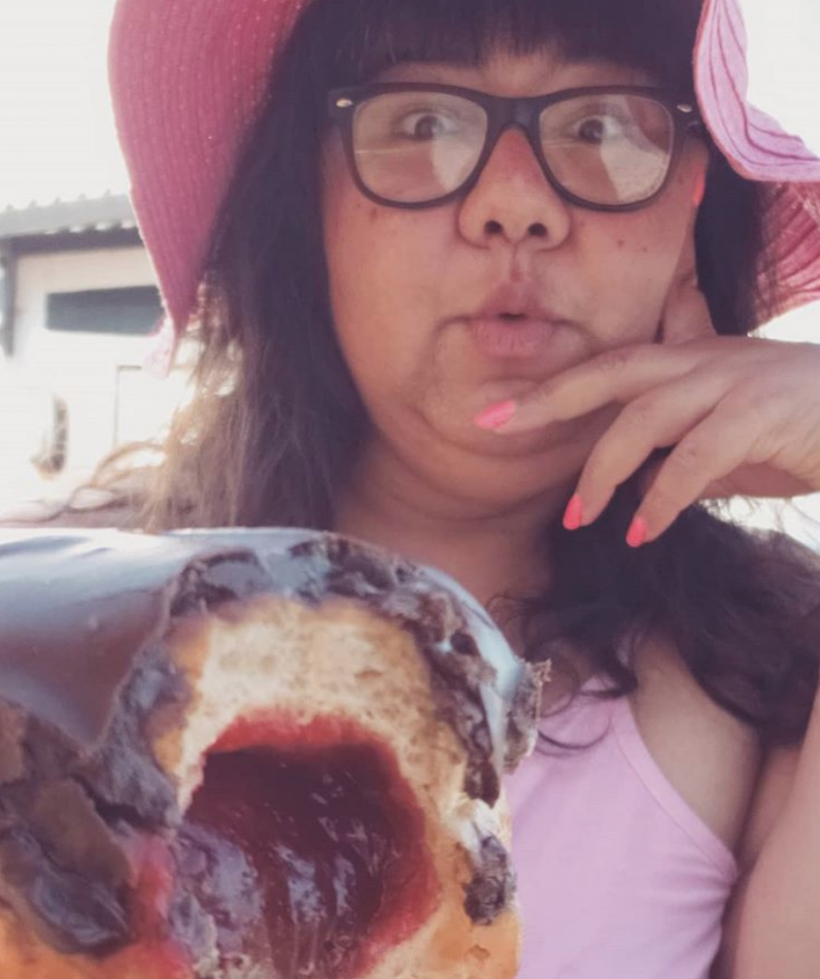 My Tinder profile indicates that I’m an unapologetic fat lady who loves coffee, feminism, and Chihuahuas. It ends with a warning: “does not play well with conformists.” “Conformist,” I’ve discovered, is a relative term. More importantly, no one who would fit into that category really identifies as such. It’s a little bit of a slur. Some people reclaim slurs, but conformists aren’t really the type to rock the boat like that. In my opinion, someone who is preoccupied with the purity or cleanliness of food is a dieter, and a dieter is a conformist. It’s like math or something. And this leads us to a sad (but, of course, funny) story about how a date went wrong after I discovered that I was hanging out with someone who liked juice a little too much.

I got a notification that I’d been super-liked on Tinder. I swiped right. He started asking me all these great questions. He wanted to know about my work and my politics. Excellent. He’s kind of a mysterious artist dude from Chile who makes weird slow-mo videos of mundane activities and renders them fascinating. I saw them. They really are fascinating.

We moved the convo to phone after he started talking about the problems with the Renaissance (easiest way to get into my pants) and how hot he thought I was. We sent each other little voice clips, but mostly texted in Spanglish for a week; whenever I couldn’t figure out how to conjugate a verb I just substituted out a Spanish word for an English one. It was all very intimate.

We decided to meet up in a little town south of where I live. He was wearing Chuck Taylors. Cute. We started wandering around and I asked him if he wanted to go have tea with me at this place I love. He agreed, but upon arrival decided that he didn’t want any tea at all. Ok. Little rude, but it is pricy special tea that they lovingly brew right in front of your eyes and put fruit into. I can understand that not everyone spends all their earned income on $4 beverages. I offered to let him taste my tea (which was loosely based on a non-alcoholic version of a blackberry mojito). He said it tasted “weird.” I was beginning to lose interest in this person very quickly at that point, but I decided not to be a Judgmental Jessica and move on.

He asked if we could stop at a 7-11 to pick up a drink he liked. While he was picking out an iced tea he deemed to be not weird, I had a hankering for ruffles. I picked up a bag. He picked up a bag. I asked him if he’d tried watermelon sour patches. He said no. So I picked those up too. I wanted to share the perfect summer meal with someone as a gesture of my goddamn generosity.

We ended up at a park.

Thing I learned: if you’re not super interested in making out with someone don’t offer to bring a tent into a meadow with them. I mostly wanted to show off my beach tent (if you’ve been following me on Instagram you will know about my current obsession with this beach tent I found at Marshall’s for $24.99 and that has been the greatest summer come-up since I purchased my first fatkini). Like it’s rad and also I feel super brave and accomplished when it’s time to break it down because it’s complicated to get an 8-foot tent back into a tiny flat bag. Bragging always seems like a good idea at the time, but it almost always has unintended not-awesome consequences.

So, we were in the tent. I lay down, ready to take in the beauty of the trees and the sun and my ruffles. Then he decided to make a move (likely in response to my unintended tent flirt). I was definitely skirting the line between “into it” and “not into it.” Like as close to “not into it” as I could be while still being in a tent with someone who was moving his face toward my face without getting slapped. I was open to liking it, is I guess what I’m saying.

And then there was teeth. “Ok he thinks my tea is weird and now he’s also a vamp-kisser?” The only way to make this better was with candy. I asked him if he wanted to play a game with the watermelon sour patches and he agreed. So I put one in my mouth and held it between my teeth – halfway in and halfway out. He bit the other piece and we kind of moved it around between our mouths but he kept pushing his half into my mouth. In my logical brain I was thinking: “Oh he doesn’t understand the game. Be more aggressive, Virgie.” I pushed it into his mouth again — and then again. But it ended up in my mouth once more.

I ate both halves, sat up and suggested we start eating the chips. He didn’t want to open his bag. He told me he doesn’t like “that stuff.” I asked him why he bought the chips then. He shrugged. Then I asked him what he does like since he seems to have no interest in delicious tea, salty ribbed potato snacks or the most perfect sour candy ever made.

There was a good ten seconds of silence while I waited for the rest of the list, but that was it.

He launched into a diatribe about how he suspected that marijuana oil is tainted and how he needs to keep his body pure because he is a practitioner of capoeira.

It was clearly time to put away the beach tent and never see each other again.

Chapter 3: What I Learned

The thing I found confusing was that he was telling me he loved my body but eating in a way that was designed by people who want to avoid fatness at all costs. Sure, he has the right to love water and fruit, but treating chips or one single piece of candy like they’re contaminated contributes to a cultural problem that directly impacts me as a fat person. Fat bodies are treated like they’re contaminated, dirty, and immoral. Our culture believes that the way we eat is the cause of these things.

To him, perhaps, my fat feminine body was acceptable to sexualize, but I don’t think he was capable of seeing the worthiness of my fat existence. I don’t think he was capable of recognizing my body and my life as autonomous entities that do not rely upon his desire. For me, it is dehumanizing when a man tries to get with me while also actively engaging in fatphobic practices. To me, it means he wants to enjoy the deliciousness of my corporeality while also keeping himself safe from marginalization. To me, it means he might be attracted to the very personality traits I acquired as part of my survival strategy. To me, it means he wants to narcissistically get off on the taboo or (in some circles) the progressive nature of his desire, which relies upon my marginalization. Not cool, dude.

If you like this article, please share it! Your clicks keep us alive!
Tags
Tindr
clean eating
eating disorder
dating
Relationships