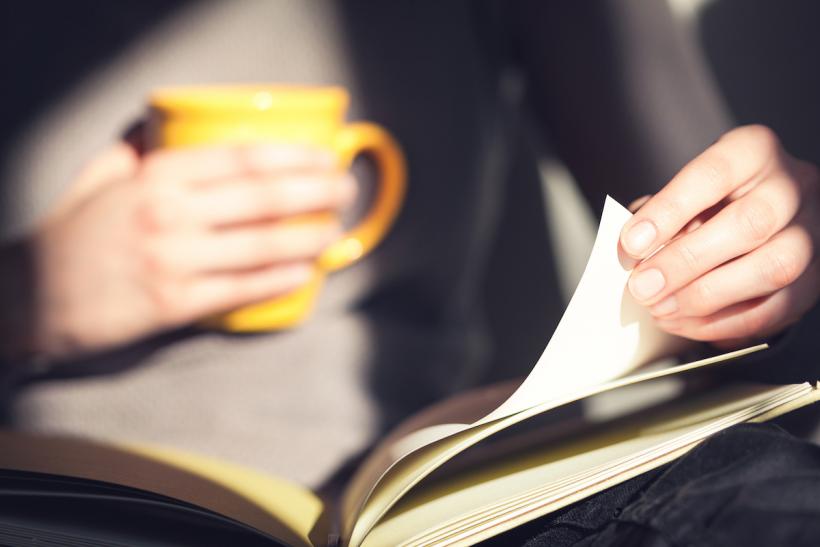 "That’s the great thing about books where the world ends: you can close them and look up to see a world that miraculously managed not to end while you were busy reading."

Before I recommend even a single book to you, I need to make sure we are on the same page. That page is called Books Are Magic Vessels Of Flickering Empathy Waiting For Lost And Lonely Souls To Find. I am a big believer in the power of books, both politically and personally. I believe books are amazing vessels for Big Ideas that can take over the world like a literal storm of paper cranes-in-waiting. I believe that they save lives and also make them more worth living in less dire circumstances. I believe this with my whole entire earnest little heart. That is why I want to tell you about them — why I hope you will listen to me when I virtually press a paperback into your virtual hands and say, “Please read this.” It is not something I say lightly. Those are holy words to me.

Holiness is an important thing to take with you when journeying to the end of the world, which is where we’re going today. We are going there because right now the world feels like it’s ending every single day, and not in the cool cinematic way where Liv Tyler or Tea Leoni mend father-daughter relationships in the face of an asteroid hurtling toward our tiny and vulnerable planet.

Instead, as is usually the case when it comes to real life versus the movies, things are both much simpler and more complicated — which is a nice way of saying “not as cool.” All the wrong people are in charge, and they seem to be making all the wrong choices. We’ve been complacent and complicit too long and it has finally caught up with us, along with the inescapable and depressing fact that sometimes people are just the absolute worst no matter how hard you try to shield the world from their greedy little orange hamfists. There have been days that I don’t leave my bed because I’m scared that it’s the only place left in the world. That while I was sleeping, the earth swallowed itself whole and left me alone to deal with the wreckage. That’s not true. But it feels true, which is just plain shitty.

In these Just Plain Shitty times, it would be wise to pull out a book and read it. Preferably one about an ending world that feels at once shittier and more hopeful than the one currently crumbling in our collective hands (like how Grey’s Anatomy is soothing to watch when you’ve got the flu). As luck would have it, there are lots of those books.

Humans like to think about what their end will look like. We build temples to it, write it on cardboard signs, and sometimes, remarkably, we make a whole story out of it. They are some of the first stories we ever told — the stories of what will happen when the stories end. Often they end so that new ones can begin, and I find a lot of personal comfort in that. It makes this suffering stuff feel a tiny bit less pointless, which makes it a tiny bit more bearable. Here are a few of my favorites.

The Girl With All The Gifts by M.R. Carey. This book is beautiful and ugly and harsh and soft. There are zombie children who fall in love with their teachers, scientists who cling to their clinical dogma like molecular Bibles, and giant gardens of undead virus-laden fungus. There are brown people and old people. There is someone with a nasty scar on their face who is also not the villain. Like most good books, it is hard to tell where the villains end and the heroes begin, scars and all. The ending is one of the single most beautiful things I have read this year, and I read a lot of beautiful things.

"Of course she'd save the kids if she could, if there was any way, but you can't save people from the world. There's nowhere else to take them." — The Girl With All The Gifts

The Gracekeepers by Kirsti Logan. Imagine the world consumed by its own ocean. Trees become sacred, breaking twigs becomes forbidden, owning land becomes even more a status symbol than it already is. People grow gills and webbed fingers sooner than the rest of us, and we make them go live alone on islands barely big enough for a shack and a dock. Circuses travel in giant boats trailed by caravans of smaller boats. We still fall in love and tell lies and get pregnant with the wrong people’s babies, but it’s all on water, so it feels much more interesting and dramatic to read about. You can put on a mask and dive under the ocean to see the remnants of Denver. You can swim by that horse that killed that guy while he was making it and not know that that is the story we tell about the horse sculpture in Denver.

It is unfamiliar and exciting, but also quietly human in beautiful ways. People cover themselves in glitter made from fish guts. Girls live with bears in traveling circuses. Bodies are marked not with tombstones, but with floating bird cages. The world keeps spinning, and if all our rockets weren’t underwater, we would be able to look down from space and see that much of it has become blue. And yet. We’re still alive. It’s nice to think about, isn’t it? It’s even better to read about.

"Through her closed eyelids, the world showed in reds and purples: the branching lines of anemones, the nodules of coral, the hard lumps of rock and mussel. Inside North was the sea. Her child had come from the sea." — The Gracekeepers

All The Kurt Vonnegut, Forever. Kurt Vonnegut is a master worldender. Most of his books end with The End — the one no one comes back from. The whole world freezes, or a cluster of aliens contextualize our insignificance so thoroughly that we feel it might as well. And every time, something in it is beautiful. There is an ache in Kurt Vonnegut’s writing that I know all too well — the ache of living with both relentless hope and unending cynicism. It is easy to become hard and brittle when you see the world that way, but Grampa Kurt will have none of that. He faces the end of time head-on, his tender beating heart offered up in his hands for the rest of us doomed earthlings to use as a beacon. I don’t know if I would have survived teenage hood without that beacon. I go back to it whenever I need to, curling up in Kurt’s apocalyptic lullaby and coming unstuck in time like Billy Pilgrim, except that I get to pick and choose when I get unstuck.

That’s the great thing about books where the world ends: you can close them and look up to see a world that miraculously managed not to end while you were busy reading. You can hop back into the fray of that still-turning, still-suffering world and maybe make your own Magic Vessel Of Flickering Empathy Waiting For Lost And Lonely Souls To Find while you’re at it. Ironic as it may be, that magic is part of the glue that holds humans together.

It’s why we haven’t actually ended the world just yet. We’ve got too many stories left to tell, so we better keep telling them while we can. I’ll be listening.

If you like this article, please share it! Your clicks keep us alive!
Tags
Books
reading
#ravishlyreads
kurt vonnegut
apocalypse
hope
self-care
bibliotherapy