I Hate That I Feel Ashamed For Needing Anxiety Meds​ 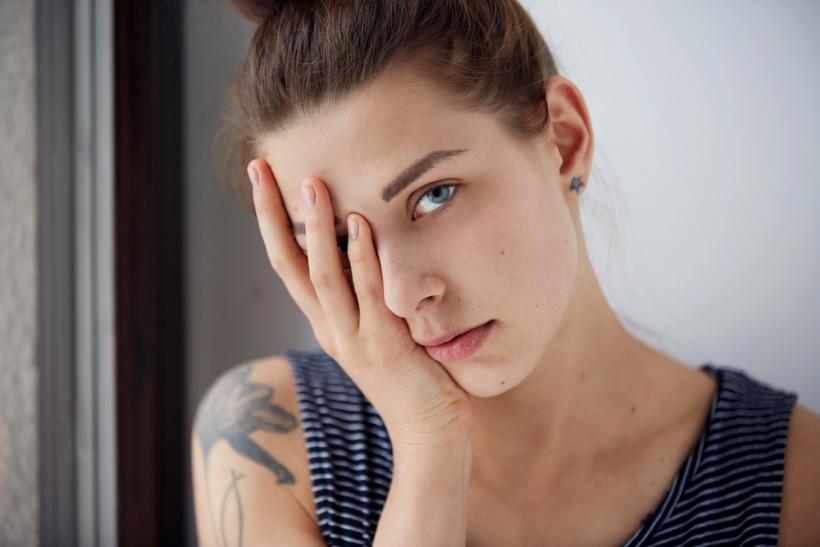 I was a person diagnosed with a condition who simply but desperately needed access to the medication prescribed to me.

On a warm, summer night after catching a film with a friend during summer break from college, I drove her home on the windy, pitch black roads that all cars travel on in North Stamford, Connecticut — roads I had hugged the curves of countless times before. As I headed south on Riverbank Road, my heart began to race as my hands slipped off the steering wheel from sweat. I remember my foot shaking on the gas pedal and rolling down my window, gasping for breath. I turned the radio on, then off, flipping buttons on my dashboard as if they could make this feeling stop.

Hours later, I laid in bed staring at the ceiling, still breathless and terrified that I was dying.

My parents took me to a neurologist who performed a routine series of tests and x-rays. I heard murmurs of “brain tumor” whispered in our kitchen down the hall from my bedroom. A few days later, we returned to the doctor who closed his manila folder and folded his hands on his desk as he asked me if I had recently experienced any severe trauma.

I thought about what constituted “any trauma” — I grew up in a tumultuous home and had been sexually assaulted as a young child. Compared to my childhood, freshman year seemed fairly uneventful. Maybe the past had caught up with me and had frayed my nerves. For the rest of the summer, I visited a psychologist to help me manage what my parents called my “college jitters.”

I realized that I sounded like an addict and most likely looked like one. If it was eight hours after I should have taken my next pill, I was already lightheaded, numb, spacey, nauseous with heart palpitations and lights flashing before my eyes.​

By junior year, my symptoms had escalated to the point where I was becoming borderline agoraphobic. I had difficulty driving at night and on highways, was experiencing daily derealization and the sensation and feeling that I was dying, and would pass out or lose my sight. These issues were coupled with frequent panic attacks that lasted hours, sometimes days. I muscled through daily activities as best as I could until a psychiatrist formally diagnosed me with a generalized anxiety disorder with acute panic attacks, scribbled some names and his signature on a little notepad and handed me prescriptions for clonazepam, Lexapro, and Prozac.

After months of “testing out” Lexapro and other SSRIs that made me feel like I was crawling out of my skin, I finally settled upon clonazepam. It didn’t make me feel loopy or sick or not myself — whatever myself was at that point. It didn’t seem to alter the fabric of who I was, so I forged a pact with it and dutifully took two milligrams twice a day for fifteen years.

The methods to refill my little amber bottle seemed arbitrary and specific to each doctor, even though many mentioned that the carbon copy of each script had to be sent to the state. I imagined there was some kind of checks and balances for controlled substances, ensuring that doctors were following protocol, but no one ever explained this. I never thought it was also to regulate and monitor me.

While I understood that some abuse, sell, or take controlled substances recreationally, I couldn’t even fathom this concept.

I was a person diagnosed with a condition who simply but desperately needed access to the medication prescribed to me. It was their solution, not mine.

In between insurance companies, changes in doctors, or times when my doctor was out of town and a colleague was handling their patients, I sometimes found myself standing underneath a pharmacy’s too-bright fluorescent lights making the sign of the cross before walking to the pickup line.

"No one called it in yet," the pharmacist told me. "You’ll need to call the doctor."

I would. Then doctor on-call would suspiciously ask me why I only had a few pills left this month. There were any number of reasons. Once, my purse was stolen. Another time, a maid threw them out while I was staying at a hotel. Then, I stuck a few in my pants pocket and washed them in the laundry. Sometimes, I simply lost the container.

I've cried countless times under those unforgiving lights, mascara running down my cheeks, my ink-stained face staring at a pharmacist or their assistant.

You Might Also Like: Telling An Anxiety Sufferer To 'Just Calm Down' Is Both Stupid And Toxic

Please help me, I begged them. I can’t live without it, I’d scream. The best they could do for me was write up a three-day emergency refill.

I sensed a hint of judgment — as if I had done something wrong. As if my medication was a handout or some kind of favor.

I realized that I sounded like an addict and most likely looked like one. If it was eight hours after I should have taken my next pill, I was already lightheaded, numb, spacey, nauseous with heart palpitations and lights flashing before my eyes.

Sometimes, I'd rifle through every pair of pants and jacket pockets, purses, pull on carpet fibers, shine a flashlight in between the seats of my car, underneath my living room couch in hopes that by some small miracle I left or dropped a pill in the last month. My ex used to keep a few in our earthquake survival backpack and urged me to stash some in my car and separate purses just in case of emergency. Now I don’t have any pills for an emergency because I’ve been told every pill has to be accounted for.

San Diego Psychiatric Nurse Practitioner Jennifer Kalia-Overlie explains that California law requires that all prescribers register and utilize CURES (Controlled Substance Utilization Review and Evaluation System), a database that monitors and tracks all controlled medication that an individual has filled within the past twelve months.

“We don’t want our patients to feel that they’re being monitored," she says. "However, it’s good practice to educate them about possible medication interactions and our responsibility to safely prescribe.  We want to make sure each patient is using medication appropriately and with the lowest possible risk of potential side effects. We also want to limit the risk of dependence, addiction, and diversion.”

According to Kalia-Overlie, how stringent the laws are for refilling controlled substances is contingent upon the drug and its classification. For example, if you suffer from Attention Deficit Disorder and have been prescribed a stimulant such as Adderall and Vyvanse, a new script is required every month to reduce the risk of misuse and abuse. The rules are harder to follow for patients taking benzos (benzodiazepines) and hypnotics, which can have up to five refills if filled within six months of the date the prescription was written. When I asked her about the dangers of abruptly stopping some controlled substances, she noted that it can result in serious return of symptoms: “Most providers, therefore, choose to keep a certain number of refills on file for patients taking medications for these reasons, or at least until their next scheduled appointment.”

Much of the anxiety and moments with my head buried in a computer bag searching for a missed pill as I’ve waited for my prescription refill could have been avoided by doctors educating me on these regulations. It is not a perfect system, but one that requires a doctor to have a relationship with each patient to understand their needs and concerns, to know that a few hours without their medication induces panic attacks — makes them unable to go to work, drive a car, or go outside.

I’ve been told that my anxiety disorder will never disappear; it is a lifelong sentence.

The ability to treat and care for myself should be more transparent and readily available. Patients need to feel like they have some control over their healthcare; that they are not dependent on one doctor’s availability. We all need an emergency kit to avoid missing a pill and going through withdrawal. Unless there is a reason to believe that someone is misusing their medication, we should be treated as patients, not addicts.

If you like this article, please share it! Your clicks keep us alive!
Tags
Anxiety Meds
anxiety
mental health
SSRI

The First Girl: On The Loss Of Friendship
Marnie Goodfriend

How My Vagina Broke Up With My Boyfriend
Marnie Goodfriend