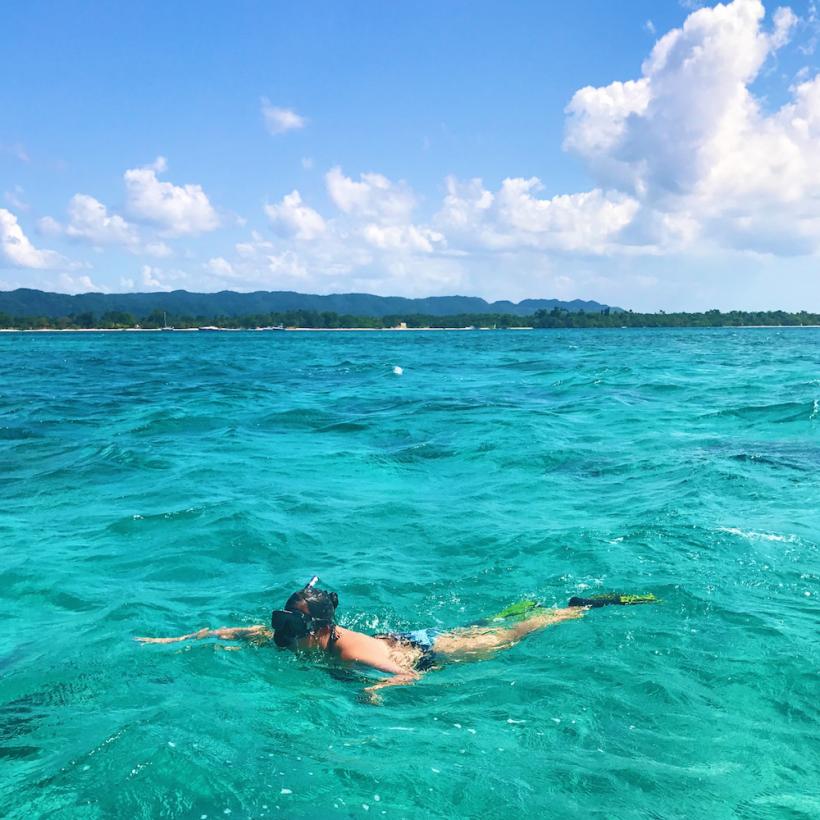 For the previous two evenings, one of the lovely ladies that works at Tingalaya’s has delivered a sliced rum cake to the communal table after dinner.

Tonight she brought out three types of rapidly melting ice cream. The panic was palpable. The tables fell silent.

There was no rum cake.

JUST KIDDING. She went back in the kitchen and came out to a collective sigh of relief.

I thought I’d ask her how she made the rum cake, what magic she mixed into the batter. I thought I might ask how I could bring some of whatever is in there (rum?) home with me.

“So Maria, do you just pour a special rum on this cake? Is there a recipe.”

THERE IS NO RECIPE??? GODDAMNIT JAMAICANS AND THEIR MAGIC CAKE.

At a bakery? WHERE, MARIA? WHERE DO YOU BUY THE CAKE? STOP BEING SO VAGUE AND MYSTERIOUS I ALREADY DON’T KNOW HOW YOU GET YOUR PANCAKES SO ROUND.

“You can buy it to take home.”

WHERE AM I GOING TO PUT 10 CAKES, MARIA?

“I can buy it from the store?”

IT’S JAMAICAN DUNCAN HINES? ARE YOU FUCKING KIDDING ME?

I bet she doesn’t make those pancakes, either. Good news: bringing home cake just got a lot easier.

What’s the second worse night of sleep you’ve ever had?

Mine was last night.

But it’s not the worst night of sleep I’ve ever had, so it’s an improvement. I woke up with seven new mosquito bites, including one on my big toe, which is just rude, OK? I know Deet causes cancer or whatever, but I’m about to bathe in that shit.

This morning, as part of our sun salutation and meditation, we shook our bodies. Literally just shook them around. Some of us were nude. All of us were jiggly. As I watched my fat move in perpetual motion, I was surprised to find that once I removed the judgment of the fat itself, I just enjoyed the feeling of the jiggling.

I felt like I should probably be ashamed, but I wasn’t. So that’s new.

Virgie talked us through a self-massage. I spent a long time with my belly — particularly the lower curtain-y portion that I have spent a lot of time loathing. The odd thing about my loathing of that part is, not having it would mean not having kids.

I thought about why that curtain of skin bothers me so much. I found myself trying to rationalize the distaste by saying it gets sweaty, or my underwear fall under it and it itches. Those reasons seem valid enough to use in public.

But I really just don’t like how it looks. When I’m on my hands and knees, it looks like an udder. When I’m standing, it folds over, hiding the top of my pubic hair. It’s absolutely covered in stretchmarks and now it’s got surgical scars too. I just don’t like it.

If you asked me why I don’t like it, I don’t know if I could tell you.

What’s not to like about it, really? It’s soft and squishy. It’s wrinkly, but the grooves in it aren’t bad, they just are.

This isn’t revolutionary. But it was this morning.

While we were half (or full) naked massaging ourselves, a woman came to the cliffs. The fact that many of us were nude didn’t bother her a bit. She was there to sell coconuts and sugarcane and would not be deterred.

Persistence. A gift of the Jamaican cultural experience

I bought a coconut that a dude hacked open right in front of me. With a MACHETE. He literally just hacked it open and stuck a straw in it. I was so glad he didn’t cut his hand off. 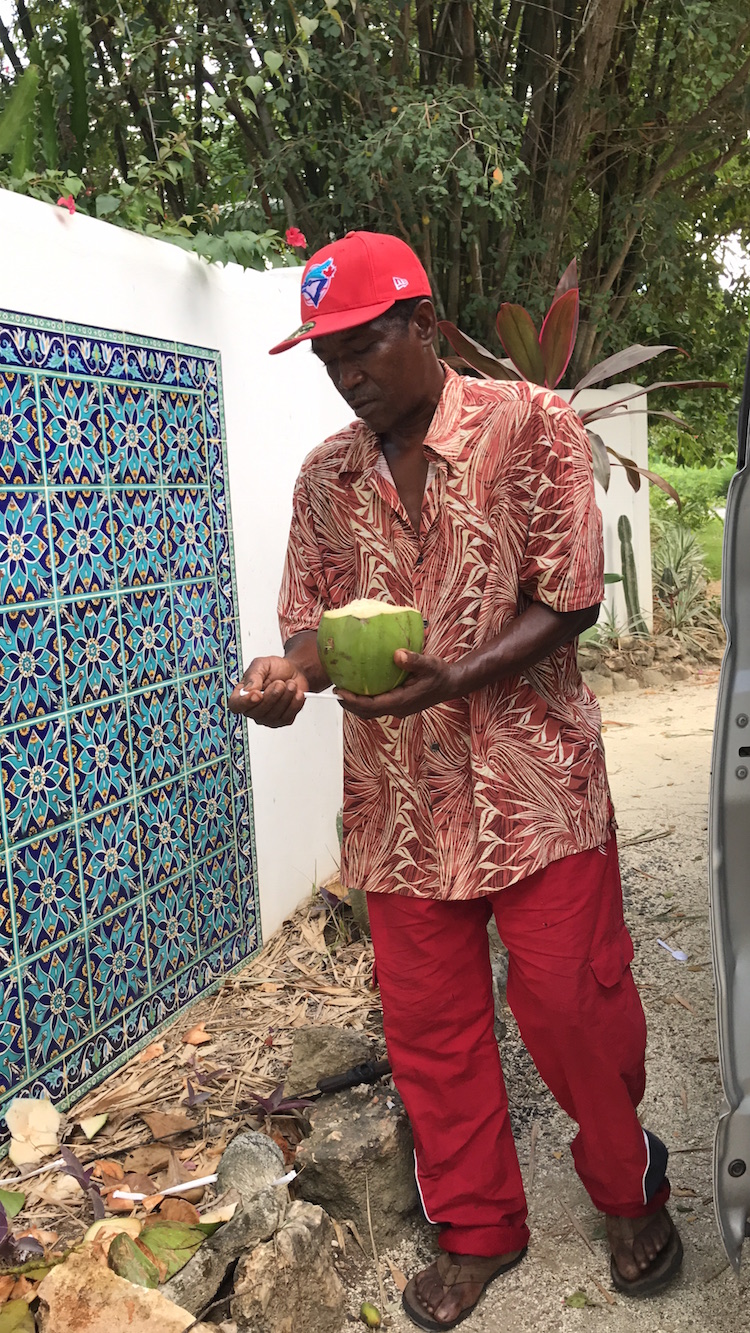 We (Miranda, Dot, and myself) took a cab to seven mile beach.

I went to an ATM to get cash.

The ATM had no money in it. There was a middle-aged white man behind me wearing a Jamaican football shirt — bright green and yellow — and a matching sun visor. He said, “I thought the idea of an ATM was there was money in it.”

I think he was trying to be funny. I laughed. But I was just laughing at his ridiculous outfit. Imagine the most obvious tourist you’ve ever seen. Now imagine someone who looks even more ridiculous than that and you’re getting close to this dude.

I bought insect repellent. Deet free — it was made of essential oils. Blah blah, Jamaican Doterra. The guy behind the counter promised me it would work as well as Deet.

The guy behind the counter is a lying sack of shit.

Note to self: buy Deet.

We went to seven mile beach and found a couple of Jamaican dudes who would take us out in a glass bottom boat to snorkel. There were just the three of us plus the two shirtless local men. 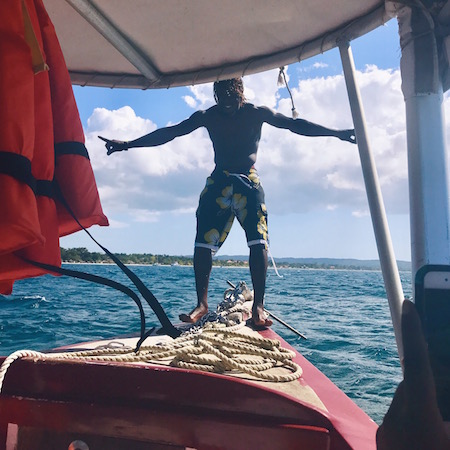 Not sure if those two things are related. Am sure they go pretty well together.

He asked us if we liked to party. He was definitely just trying to find out if we wanted to buy some weed.

Snorkeling is slightly less scary than just swimming in the open ocean. At least when you’re snorkeling, you can see what’s around you.

As I was about to dive into the water, Shirtless Dude #1 asked me for my wedding ring, which I thought was pretty presumptuous. Turns out barracudas are attracted to things that shimmer. That would have been helpful to know.

Also helpful to know? THAT THERE ARE BARRACUDAS IN JAMAICA.

I didn’t see any barracudas, but a school of damselfish surrounded me, which, on the scary to amazing scale, definitely falls toward amazing. I put out my finger and one of them bit it.

Snorkeling is amazing. I want to float in the sea forever. 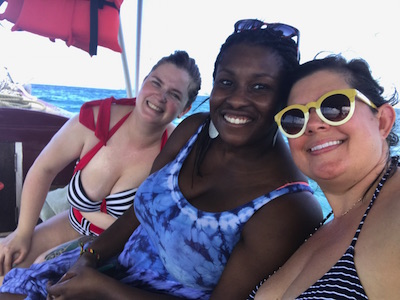 Except for the part where I swallowed three gallons of seawater. Do not recommend.

We collectively cooked dinner. By which I mean, a bunch of the other ladies cooked dinner and I sat and watched them because I cook EVERY DAY.

We wrapped dinner up around 6:45, which for whatever reason felt like about 11:45. We wanted to go to bed, but we didn’t want to go to bed. So we went to the oceanside pool.

You know what’s more scary than swimming in the ocean when you can’t see the bottom and you don’t know what is fucking down there?

Swimming in the ocean when you can’t see the bottom and you don’t know what is fucking down there and it’s DARK.

There is virtually no light pollution in Jamaica. Which means you can see stars you didn’t know were stars.

Did you know the whole sky is stars?

Oh. You knew that already.

I mean, I knew that too, I was just telling you in case you didn’t.

I cannot believe Jamaican rum cake comes from a BOX.

The bats here are… large.

By large, I mean HE-UGE.

If you are white and look even remotely tourist-y, someone is going to try to sell you a bracelet. Probably three.

One ‘no’ is not enough. You will need a minimum of three noes.

Every street vendor is going to tell you the thing that are peddling, they made themselves.

They did not make the thing themselves.

It was probably made in China.

That’s how they live though so I just pretend it’s from Jamaica.

I cannot believe that more people do not get hit by cars.

I have forgotten this at least 15 times.

I think I will be friends with Miranda and Dot forever.

If you like this article, please share it! Your clicks keep us alive!
Tags
babecamp
#JoniDoesBabecamp
Jamaica
Travel
body positivity