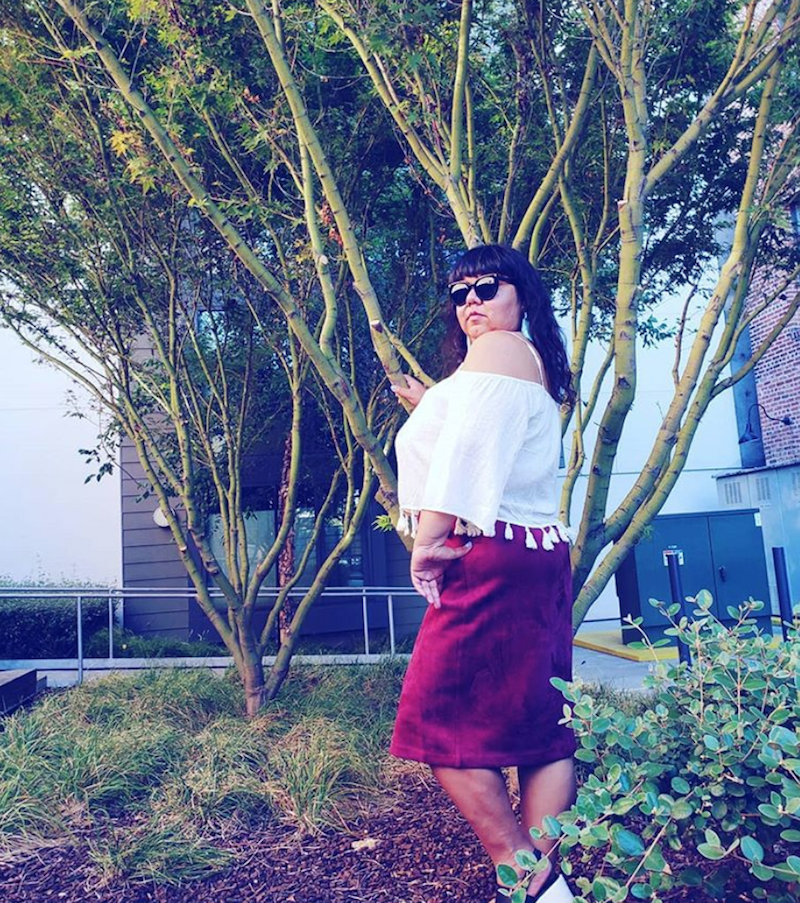 It was about 80 degrees out at 7pm and I was sitting on a patio talking to my friend about the first time I realized that there was more to the discussion of size than simply lumping everyone into either “fat” or “thin.” More specifically, I realized that it was unfair and myopic to presume that all the people on the “fat” side of the line were dealing with the same level of trauma, stigma and marginalization.

I recalled the first time I got called out on my relative size privilege. It was Facebook, and I had just been launching a large-scale critique of the way that fat women’s bodies are used for sexual service. I had been having a long string of romantic rejections that also involved casual sexual encounters. I was frustrated with the sense that my fat body was considered appropriate for private escapades but that there was no public component to our engagement. I spoke broadly about how all fat feminine bodies are used this way. Someone chimed in:

“Has it ever occurred to you that not all fat women have access to casual sex and that your access to albeit dissatisfying sexual encounters is a privilege?”

No, it literally hadn’t.

Having grown up being emotionally bludgeoned daily I truly had internalized the idea that I was a monster. More than that, I was the hugest, biggest, largest, most enormous monster that ever walked the planet. There was a boy at school who insisted that every time I sat back in my desk that my weight would plummet his desk back several feet. There were kids who made sound effects when I walked around, like I was Godzilla-sized. I popped out of my pants, was forced to play the boy part in every role playing game ever, and was shut out of the early dating and romantic experiences my peers were having.

These experiences gave me a skewed sense of my enormity. When I entered the fat movement, my brain was able to observe that there were people who were smaller or larger than me, but my own wound prevented me from acknowledging that those size differences impacted our lives in significantly different ways. Moreover, the idea that I had size privilege was inconceivable to me. I had spent my entire life being told that I was gross, being rejected, and feeling ashamed of myself. Didn’t that make me a full bona fide member of the fat rejects?

I came to realize that even though I was certainly a bona fide member, that some fat people were far more acutely marginalized than me.

A whole world of gray area opened up.

As I began to ask questions I found myself realizing that I had quite a bit of access to things that mattered to me the most:

Yes, it was harder to find clothes and that’s shitty, but my closet was overflowing. Not all fat people have access to even the minimal number of things I routinely find when shopping.

Yes, I avoided commuter hours on public transportation because that’s when I experienced the most fatphobia and that’s shitty, but I had no trouble the remaining 80% of the time. Not all fat people have that.

Yes, I dealt with size discrimination at the doctor and that’s shitty, but I also expected that self-advocacy would be sufficient measure to give me good medical care. Not all fat people have the privilege of being taken seriously even if they self-advocate and further, not all fat people feel safe enough to even go to the doctor or can access equipment that accommodates their size.

This new information was hard for me to process. It shifted my understanding of myself. I grieved that feeling of connection to all fat people. I was sad that I was not in perfectly harmonious solidarity with all fat people. Sometimes the new information made me feel bad because I felt implicated. All of these things were important and good. I’m glad someone told me I was wrong. I’m glad I asked myself these questions. I’m still not sure what to do with the answers all the time, but being uncomfortable is important to me.

The romantic fantasy of a synchronous solidarity — one where there are no differences between marginalized people and we can celebrate our shared struggle without tension — is beautiful. Who doesn’t want to feel like they’ve found their people after years of feeling like an outsider? Literally no one. However, this fantasy is costly to many. That romantic fantasy is often constructed by the most privileged within the marginalized group. I know it sounds super weird saying someone can be both marginalized and privileged at the same time, but this is the gray area where humans — and politics — reside. Gray area is weird to us because we live in a culture that is obsessed with binaries — gay and straight, man and woman, rich and poor, fat and thin. But I promise you that it’s those binaries that are weird . Complexity is at the core of human experience. The human experience is gray.

So to answer the question I posed in the title: Yes, smaller fat people do have privilege. Figuring this out was an important part of my maturity. I realized that I could leverage my relative privilege to lift other people up, rather than keep them silenced in order to maintain my fantasy of a utopia they weren’t actually feeling. Sometimes our bubbles need to be burst because something greater than that bubble is possible — compassion, understanding, healing, actual community, and the kind of solidarity that centers truth over romance.