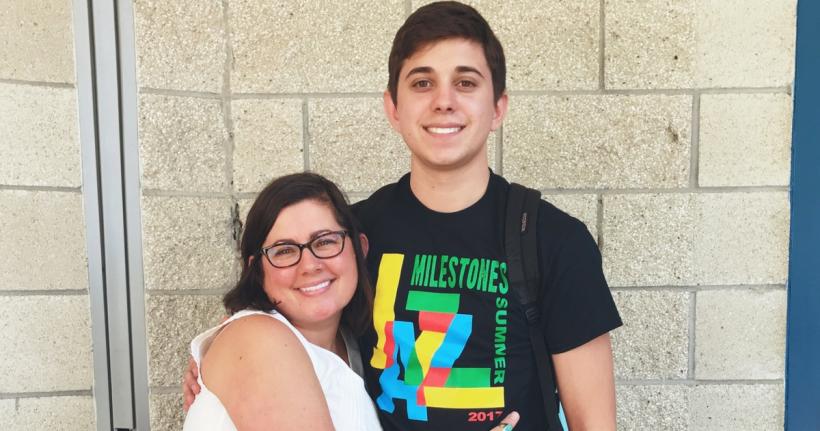 When I look into his eyes, I see my own. And in them, I see the disease we share reflected, bipolar disorder.

In his eyes, I see brown and orange, small flecks of gold. My firstborn son, the baby I never knew I needed. I have to look up to see them now, craning my neck to meet his gaze; he towers over me by 10 inches. Not long ago he was small, and not long before that, he was a baby, but his eyes were the same, even then. When I look into his eyes, I see my own. And in them, I see bipolar disorder, the disease we share reflected back to me.

If mental illness were tangible, like the birthmark he had on his back when he was a baby, or the scar on the right side of his face — evidence of the shovel his brother hit him with when they were just rowdy toddlers, it would be easy for everyone to see. But it’s not. Bipolar disorder is a crafty one. She dresses herself up with boundless energy, endless productivity, talent. And when she’s not making you look exceptional, she hides, crouches behind depression, self-loathing, prayers for death. Bipolar disorder isn’t objective, but I can see her in his eyes. I know she is there because she is in mine, too.

Sean got it from me.

I got it from my mom.

She got it from her grandmother via my grandmother’s previously unexpressed gene. A little tick on one of the 23 chromosomes she contributed to the whole genetic affair. A little twist in the strand that skipped her (and the other four children she bore) and landed on my mom like a ton of bricks. She then dropped it into my genetic recipe, like too much salt in a batch of chocolate chip cookies or too few eggs in a batch of fresh pasta — too much of something, not enough of something else.

And I passed it on to Sean.

I have three kids who are old enough to have had their first break by now — a bout of crippling depression, a period of hypomania that steals their sleep, their ability to reason, their sanity. But he’s the only one whose DNA has decided to express that unfortunate tick. It had to be one of my babies — 40% chance of it — the odds were never in their favor that way.

The thing is, I knew he was like me.

Because he is like me, I watched. I saw it coming for him. Not all of it, not all at once. But little glimpses of it here and there. His manic energy around people. His sullen behavior at home. His incredible ability to accomplish anything, or nothing, depending on the day. I saw it creeping in slowly. His tantrums as a toddler. His rollercoaster of emotions as a pre-teen. His continued lability into adulthood, combined with the great gifts of talent and intellect, the curses of worthlessness.

Do you know what it is to look into your child’s beautiful golden brown eyes, eyes so much like your own, so unique with their flecks of green and gold, so vacant with same emptiness with which you are so well acquainted?

Only, I didn’t know what to do either.

I know what it feels like to want to die, or at least to cease to exist. It’s not so much that you want to be dead, you just don’t want to be here. I know this feeling because I have had it. What I don’t know, is how to resolve it. If you can’t resolve something in yourself, how can you hope to understand to resolve it in someone else?

And what if that someone else is your child?

And further, what if your child feels that way because you gave him the same disease your mom gave you, that her mom gave her, and so on?

Do you know what it is to look into your child’s beautiful golden brown eyes, eyes so much like your own, so unique with their flecks of green and gold, so vacant with same emptiness with which you are so well acquainted?

Do you know what it is like to feel, to know, that his pain is because of you?

The immediate days after Sean's diagnosis were about triage more than any other thing. Keeping him safe. Making sure he was surrounded and supported, finding him adequate psychiatric care. It wasn’t until I’d had some time to breathe that I was able to consider what this diagnosis means for my bright, beautiful boy.

I told him I was sorry. I told him it would be okay. And in the car on the way back from his first psychiatrist appointment, I told him that it wasn’t all bad. You were diagnosed early! There are so many excellent medications! If you can manage it, bipolar disorder can be a great ally!

The reality for a 19-year-old young man though, on the verge of figuring out how to be an adult, trying to find his path, is this: bipolar disorder is a turn in the path that you can’t prepare for. I said those things because that’s what moms do, or what we try to do. We look for ways to cure, to fix, to heal. We search for any opportunity to help. We clean the wound, apply the bandage, kiss the boo-boo, make it all better.

When your toddler falls off the swing and cries, you dry his tears. You hug him. In no time he’s back to the playground, running around with the other children. The injury is forgotten, the pain is buried under laughter and squeals of “push me higher!”

But what if you pushed him off the swing? What then?

That’s what this feels like. His pain, his mental illness, traces right back to me. It’s not an accident that was no one’s fault. There is fault. And it is mine.

This always strikes me as funny. Maybe funny isn’t the right word, ironic? Who else would I blame?

No, there’s only me.

I lose sleep worrying that he’ll hate me, that he already hates me, for doing this to him. I pace and fret knowing that his suicide risk is high already because he’s male and higher now because he's bipolar. I wonder and weep, hoping that he will be loved by someone who sees past his illness.

None of this changes this truth; he got it. He has bipolar disorder. All I can do now is take his hand, hold him close and support him as he finds his way.

I look in his eyes and I see my own. I see pain and confusion and uncertainty; I see the little boy I loved so dearly and the man I love even more.

If you like this article, please share it! Your clicks keep us alive!
Tags
parenting
bipolar
teenagers
mental illness
bipolar disorder