I Recovered From Health Anxiety (And So Can You) 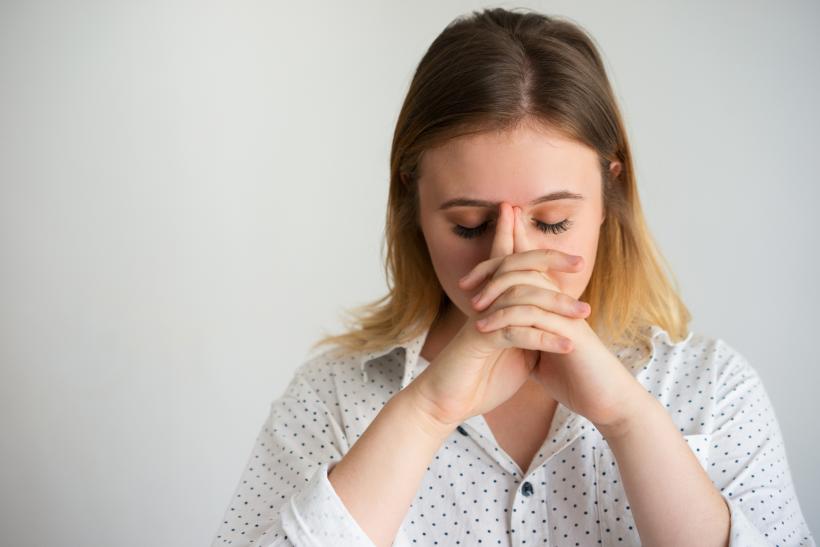 For several years in my late 20s and early 30s, health anxiety had a stranglehold on my life — and it started from a scary place.

In the age of information, obsessing over our well-being has become not only all too easy but something of a self-deprecating joke.

“I’m such a hypochondriac!” we jest when wondering aloud if that zit is cancer or scour WebMD to explain a mysterious pain. But for many of us, fear about physical issues is no laughing matter. It certainly wasn’t for me.

For several years in my late 20s and early 30s, health anxiety had a stranglehold on my life — and it started from a scary place.

When I was 24, my world was rocked by a bizarre, unexpected health issue: a “probably benign tumor” called a dermoid cyst on my right ovary. The size of a melon, this growth was so large it had twisted my ovary beyond the point of saving. The excruciating pain came on abruptly, and after an ambulance ride and numerous tests, I endured a blurry week that included invasive surgery and time away from my newborn. Because of the timing of the incident, I had to forfeit an entire semester of my teaching assistantship at the university where I was studying for my Master’s. Then, to add insult to injury, I contracted an intestinal infection from the hospital and spent weeks running to the bathroom with diarrhea a dozen times a day.

Once I recovered from this nightmare, I figured I had accrued my lifetime dose of medical trauma. I was wrong.

A few months later, I experienced more mysterious attacks of pain, again in my abdomen. It took seven months and multiple doctors to arrive at the conjecture that I likely had a faulty gallbladder. Surgery number two ensued. Not surprisingly, when I found myself pregnant soon after this second abdominal surgery, the nine months that followed were anything but smooth sailing.

In the wake of these problems, I began to think of myself as broken.

“I’m just in very poor health,” I would tell people when they asked why I hadn’t taught in the fall or couldn’t make it to family events.

Because my health issues seemed to hit like a bolt out of the blue, I became leery of what might happen next. My body was the enemy, lying in wait to spring its next assault. Vigilant hyper-attention to its every move was the only sure way to ward off future attacks.

I grew increasingly paranoid. When I experienced my first ocular migraine, I rushed to the ophthalmologist convinced I was having a stroke or going blind. A muscle spasm in my leg convinced me that I had ALS. Twitches developed into pains that came and went until it just had to be MS. Visits to doctors provided no answers, as practitioners tossed out the dreaded non-diagnosis of fibromyalgia. Then, as the muscle pain appeared to resolve, I suddenly had to pee all the time. The urologist wanted to call it interstitial cystitis.

Because my health issues seemed to hit like a bolt out of the blue, I became leery of what might happen next. My body was the enemy, lying in wait to spring its next assault. Vigilant hyper-attention to its every move was the only sure way to ward off future attacks.

All the while, fear of a debilitating diagnosis constantly filled my mind.

I’m no detective, but gradually a lightbulb went on. Unless I had been hexed, this maze of medical issues was not normal for a 20-something woman who had always taken good care of her health. Even I could see that perhaps an interplay between the mental and the physical was at work. In a desperate search for answers, I started to read about the mind-body connection.

Somewhere along the way, a book called It’s Not All in Your Head turned up in an Amazon search. Since it addressed the health anxiety angle of the mind-body connection, it seemed like a logical choice. The authors went on to explain that health anxiety can create physiological damage to the body. Conditions like fibromyalgia, interstitial cystitis, back pain, headaches, and insomnia all fell under this umbrella of “stress illness.”

I couldn’t deny the clear picture this painted of my health.

Around this time, I also began seeing a therapist. Our sessions helped me understand that, as a new mom, anxiety about my health replaced underlying emotions about motherhood. If I could focus on problems in my health, I didn’t have to address the reality that there was a lot I really didn’t enjoy about taking care of my kids.

Between my reading, therapy, and a lot of hard self-reflection, I slowly untangled the web of fear and anxiety about my health and the physical problems it caused. I learned I can choose my thinking about my health. Holding optimistic beliefs about my health — even meditating upon positive truths about my physical state — can make all the difference. As I’ve put this into practice over the last few years, I’ve seen a remarkable improvement in my health.

These days, I can’t say I’m never hit with anxiety about an unexpected pain or a weird lump. But when fear creeps in, I stick to some helpful guidelines.

Recently, after an epic freakout when my left arm fell asleep a few nights in a row, I grounded myself with the question, “Could this be normal?” Realizing that losing feeling in an arm while sleeping isn’t that uncommon brought me back to sanity.

In our hyper-watchful state, people with health anxiety tend to spring on symptoms the moment they start. Giving a health issue a little time allows it space to resolve on its own — or even change.

Having a list of common symptoms that accompany anxiety can be an enormous help in talking yourself off the hypochondriasis ledge.

What might be going on lately that could cause an uptick in your stress levels? Jobs, family issues, or financial problems could all contribute. Take note of patterns, too, and you may see something enlightening emerge.

If you like this article, please share it! Your clicks keep us alive!
Tags
anxiety
mental health
recovery
mental illness
health anxiety

I Recovered From Health Anxiety (And So Can You)
Sarah Garone