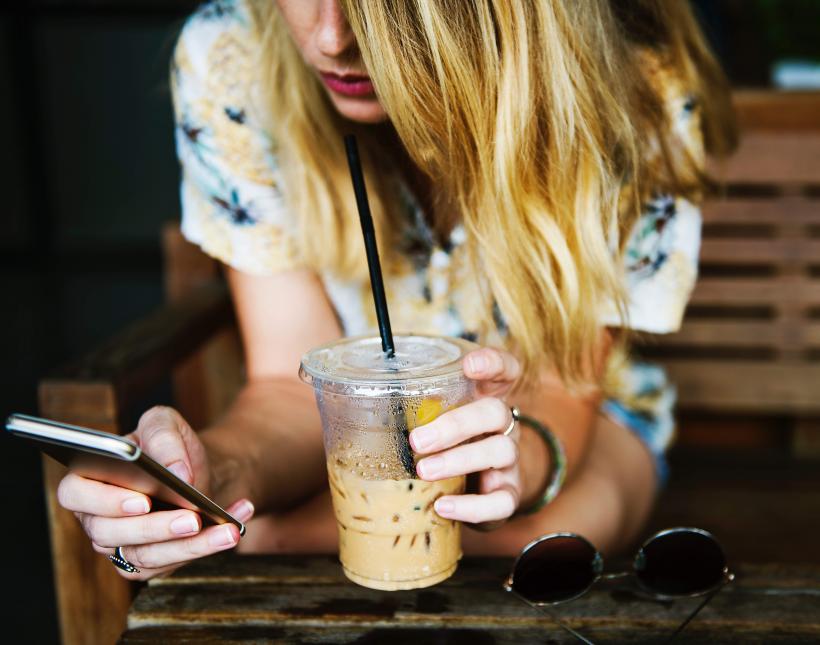 I’m not proud to type any of this. Not proud at all. I almost feel that if I pretend I haven’t been guilty of any of the following behavior, I can forget I ever did it and not take the chance of being judged or thought of as crazy.

I was in a new relationship. It was going beautifully. Magically, even. He was smart, tall, dark, handsome, attentive, polite; the sex and kisses were incredible, and I was really starting to like him.

He wasn’t a constant texter like I am, and the first few weeks of dating, I noticed I would spin and stress out in between dates if I didn't hear from him via text. I actually felt a physical sensation in the pit of my stomach. More specifically, it was a burning in my third chakra — which (turns out) is the energy center responsible for personal power, self-esteem, and confidence. Anyways, when I didn’t hear from him, I’d feel rejected, hurt, and worried he didn’t like me. I'd fear he might never text me again.

What was wrong with me?

When I’d first met him, at the end of the first date, I told him I couldn’t kiss him because "I needed to move slow" because my last relationship moved way too quickly. Ugh, a detail he listened to and respected. I regretted saying this because he was SO NOT the last guy I dated, even though moving slowly IS the healthier choice.

About six weeks into dating, we still weren’t officially "boyfriend and girlfriend," but we were only seeing each other. It was at this point he had to go out of town for three weeks on a work trip. I knew this would make me feel scared, out of control, and unsure of where we stood since we weren’t official. He asked what he could do to make sure I felt safe and calm. Like I said, he was a total gentleman. I asked him to keep in touch with me; that I liked getting texts from him. When in doubt, text more. He reassured me and said he’d call and facetime as well.

My stalking was only making me feel bad, and it was affecting my personality and attitude with my guy when he texted me. I was torturing myself and becoming completely addicted to this vicious cycle of behavior.

He went away, and while he was gone, went above and beyond checking in with me and keeping in touch. It was all very romantic and sweet. And that’s when I made the mistake of looking at his Instagram activity.

When I say "mistake," it’s not because I found him up to no good or doing anything skeezy. Not at all.

I say "mistake" because of the Pandora's box of insecurities it opened up and the false stories I created by looking at the pages of the girls he followed and the girls who followed him, as well comments and likes.

Again, I don’t even want to admit any of this. To tell you about the rabbit hole I went down is HUMILIATING — wondering who these girls were to him and if they’d dated. I was making myself spin out.

Let it be known, whether the man I’m dating or any man reading this believes me or not, hear this and know it is the absolute truth, hand to God: ALL WOMEN LOOK AT AND ARE HYPER AWARE OF THEIR CRUSH'S ACTIVITY ON INSTAGRAM. EVERY woman I have ever met, DM’d with, spoken to in passing, and/or am friends with has behaved EXACTLY like this when it comes to her crush and Instagram.

What makes me unique is that I’m admitting it. I’m putting myself in the extremely raw and vulnerable position of bringing it out into the open. Let me show myself in the hopes it will make you feel less alone, so you can avoid the pitfalls of fear and insecurity and the way social media enables it.

I was emotionally cutting myself looking at the Instagram behavior of the guy I was dating and falling for. And yet I found nothing. The worst thing I saw was that he had liked a photo of some girl wearing a bikini — BEFORE I’d ever even met him! Wait, the other thing I saw that panicked me was that he followed some girl, also in another country, who ONLY posts nudes. ONLY NUDES! EXCLUSIVELY NUDES (I should start a band and call it that). But, that's her prerogative I suppose. He’d never liked any of these nudes. Not that it was any of my business. They’d been insta "friends" before I met him. But man, imagine the stories I created about THAT insta friendship!

A "like" isn’t just a "like" — it’s letting someone know you see them and like what you see. If you didn’t want to make a move, connect, flirt, and initiate contact, you’d simply look at the photo. Sex and hookups and relationships and dating come from meeting on Instagram and DM’ing ALL THE TIME NOW! THAT’S HOW IT HAPPENS! So why wouldn’t you want to see if the person you’re dating is a lothario scumbag who can’t be trusted?

My stalking was only making me feel bad, and it was affecting my personality and attitude with my guy when he texted me. I was torturing myself and becoming completely addicted to this vicious cycle of behavior. I think I was subconsciously addicted to the adrenaline rush it provided — searching, looking, wondering, making myself feel less special, and seemingly forgetting about the experiences and relationship I had one-on-one with this man.

I could tell he was confused by the tone of my texts now. I was coming off defensive and cold. And when he backed off or told me he was confused, I would feel shame and embarrassment because I couldn’t explain to him that I’d hurt my feelings by going down an Instagram wormhole and being jealous and making up stories in my mind about girls and likes and who knows what else.

I told him about my Instagram freak out and insecurities. Not as in-depth as this humiliating essay, but close. He didn’t understand why I was stressed and then reassured me. We even started following each other on Instagram. But my behavior and compulsion didn't stop. So he told me about the past girls he dated. He even asked me if I was sure I wanted to know.

Of course, I did.

And I looked them all up on Instagram, which was a recipe for disaster.

To make it even WEIRDER and to really open up the aperture of how voyeuristic and more specifically MASOCHISTIC Instagram is, at one point (after a magical romantic getaway where he asked me to be his girlfriend, and we made it official) TWO of the girls he dated in the past started watching MY stories! How did they even know we were dating? The only way they could have known to check my page was if they were monitoring who he followed and noticed him following me, some new girl, and looked into it.

Jesus Christ. Part of me felt a kinship with these girls. Not just because we’d slept with the same hunk, but because they were CLEARLY going down their OWN rabbit holes and emotionally cutting themselves by looking at the new girl a guy they’d liked was dating.

I felt for them! Life is so weird!

The fact that we live in a day and age where we have all this information at our fingertips is too much.

There needs to be mindfulness to it. And all my mindfulness was out the window. I was in this vicious cycle of trying to make myself feel bad and hurt my feelings. It was hurting my relationship. It was turning me into a defensive, angry, untrusting, insecure person.

I was making social media the ultimate truth of my relationship.

And I had to stop.