I Finally Took Self-Help Advice And It Actually Worked! 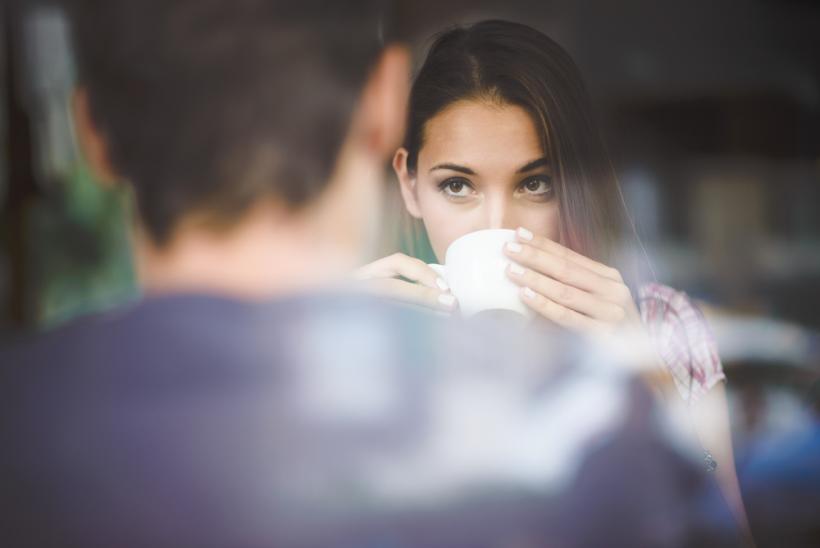 I was actually keeping the promise I’d made to myself and sticking to all the self-help advice I’d read.

I had just woken up from a deep sleep. The night before was a hazy memory, but it was quickly coming back to me. I’d completed an online, self-help workshop — designed to help me find my ‘perfect partner’ — that ended with the bold suggestion of throwing oneself into the world of dating via apps. So I’d signed up for Tinder for the first time.

I IMMEDIATELY lost three hours of my life swiping through men who, until now, I had no idea (and wished I didn’t know) existed.

Right before drifting off to bed, I’d matched with a few guys. I made sure to be incredibly discerning with who I swiped right on, as opposed to just liking everyone  and racking up a bunch of lackluster matches to feed my ego. No. I was only swiping on men I was genuinely attracted to and would be excited about meeting IRL. One of these matches was a tall, handsome, British guy who had effortlessly chic style, and just an overall light and kind vibe.

In my morning grogginess, I reached for my phone and did all my usual, manual (I don’t get push notifications, and don’t understand the people who do), addictive refreshing: Instagram, Twitter, Facebook, Email, and, oh yeah, now Tinder! Any updates? What’s this? I had a message!

It was from the British guy. He’d messaged me FIRST. He’d ALSO messaged me at the respectable hour of 7 am, no less. I think if a guy writes to you after 10 pm, it just feels shady. Can’t we be respectfully romantic anymore? Apparently, THIS guy could be! Unless I was mistaking an all-night coke bender for responsible, respectable, adult behavior.

His message was utterly charming. Not sarcastic (my therapist says sarcasm is unresolved rage). Not ‘too trying hard’. No, it was lovely — everything you’d want it to be, and nothing you wouldn’t. The back and forth was good. We quickly moved from the app to text.

After he gave me his number, I texted him and referred to myself as his Tinder GF. I told him to save my number, and he teasingly reminded me that we were supposed to pretend we didn’t meet on Tinder. I immediately drafted the movie version of how we really met. He joined me in this mock meeting fantasy and added to it. Aw, we were already SO CUTE. CLASSIC US! Relax Alexi! Remember, you don’t even know this guy. He isn’t real until you meet in person. He could be a murderer! OR have a freakishly high pitched voice (that happened to me once). Mental note, Google this guy and watch any videos you can find of him talking (I did btw).

But back to our initial romantic exchange… it was nice. It made me happy. But the jaded part of me pushed that aside — the part of me that had been disappointed too many times before pushed down any hope or expectations.

British Tinder Guy asked me if I wanted to meet for coffee in REAL life, during the day! A coffee DAY DATE! Oh. My. F*cking. Gawd. Hiding behind a screen was one thing, but meeting someone in the light of day IRL… QUITE ANOTHER! I used to talk so much shit about this app. But now, here I was.

I was picking out outfits for my coffee day date and drawing an Epsom salt bath when I remembered some of the wise words and suggestions from the workshop  (as well as one of the old-timey dating books I had just read called Getting To I Do by Dr. Patricia Allen. I know. I know. An outdated title that conjures a non-feminist vibe — but trust me, it’s the greatest (I even went on to have the author, now 83 years old, on my Love, Alexi podcast). Both said not to kiss on the first date, to wait at least SIX WEEKS before having sex with someone, AND not to have sex until you’re in a COMMITTED relationship. The latter was from the old-timey book. How the hell was I gonna do that? I was far from a virgin and likened sex to meditation... but these were all things I wouldn't worry about now. I had my FIRST TINDER DATE EVER to focus on. I would worry about the sex stuff later.

Sidenote: Years ago I would have been offended if a guy suggested a coffee day date. I would have thought it was super unsexy and that he wasn’t very into me or something. But now, I was thankful.

The daytime coffee date was the perfect opportunity to slow things down, and just get to know someone without hiding behind alcohol or the cloak of darkness.

The day of our coffee date, I had JUST gotten my period. I was tired, moody, busy, crampy, and didn’t want the added stress of meeting up with and being judged by a stranger. But I wasn’t going to cancel. We’d come this far. I had to get my first Tinder date out of the way or else I never would!

When I arrived, he was already there, seated at a table. A real person. A real person I had met on the Tinder app. He was gorgeous. Dark hair, olive skin, a beard, nice arms, good style. He was a little broody and masculine and rugged. He had a Clive Owen vibe. And I’m not just saying that because he’s British and brunette. I really hope you get the picture I’m trying to paint here.

I was nervous, which I, of course, told him. I was stream-of-consciousness talking and making jokes like “I can’t do this. I’m outta here!” and “Ok, we did it. I can check ‘first Tinder date’ off the list. See ya!” I wondered if he was nervous too. As we finished our coffees, I suggested we take a stroll around the neighborhood.

We ended up at a French cafe where we ordered rosé and shared french fries. He was smart and thoughtful. He came across as both gentle and sincere. I felt like myself, like I could open up to him. Maybe it was because I had no expectations, or because nothing and no one linked us. We talked about religion, God, spirituality, friends, birthday cakes, Diptyque candles, Bravo tv, and who knows what else?

He walked me back to my apartment building, and we sat on the front steps. I could smell his cologne. I liked it. He was sitting so incredibly close to me, and I felt as though he might be about to kiss me. And that’s when the following words fell from my mouth:

“I don’t know what’s happening, but I feel like you’re about to kiss me and I just can’t kiss you on a first date. I really need to take it slow.”

Who was I? Take it slow? I totally wanted to kiss him. But as attracted to him as I was, and as much as I might have liked him or could like him, I liked myself more and knew that I needed to try life and my approach to romance, dating, and a possible relationship a different way. I didn’t want to just make out on my porch with a virtual stranger. I wanted something different. I was still healing from so much hurt and heartbreak — mistakes and disappointments I’d had not so long ago. I needed to take my time and get to know a person.

I wasn’t after a story, or a makeout, or instant gratification. I was too sensitive for that right now. I wanted more for me. I was at a point in my life where my heart needed to be treated with care. And it started with me. I was after intimacy, respect, and not giving myself away so freely. As lovely as he seemed, I was happy to take a beat, take it slow and see how it unfolded or didn’t.

I was actually keeping the promise I’d made to myself and sticking to all the self-help advice I’d read.

THAT WAS A FIRST! Not that I was surprised, but he agreed and said he’d like to kiss me but generally didn’t kiss on a first date as a rule. What a gentleman. And with that, he called his Lyft, and we said goodbye.

I walked upstairs to my apartment in a dream-like haze. I felt tingly. What was this? I was floating on a cloud like a crushed out giddy teenager. What just happened? This was meant to be nothing. This was meant to be a no expectations, first Tinder date ever, with a complete stranger.

I slowly lowered myself to the floor and laid on my rug. I didn't want this moment to pass. I liked him. I really liked him. I barely knew him, I’d just met him, but I liked him. His smell, the sound of his voice, being near him. Something about it all was dreamy and magical and just… nice. Wow, so THIS was Tinder. Who knew?!

PS: It’s been nearly eight months, and we’re still together. We took it slow (that’s a whole other article all it’s own) and I’m so glad we did. He treats me beautifully, and I’ve never been happier. I tried dating a new way — meeting a man on an app, taking it slow — and it paid off in ways I could never have imagined. I’m still growing and evolving, learning how to be in a healthy relationship. But it’s happening. And I’m better for it.

Here’s to having hope — hope in love, and hope that as hard or impossible as you think it might be, it’s never too late to break old habits, change how you navigate life, and open up to new possibilities.

If you like this article, please share it! Your clicks keep us alive!
Tags
Love Alexi
Alexi Wasser
self-help
self-care
advice