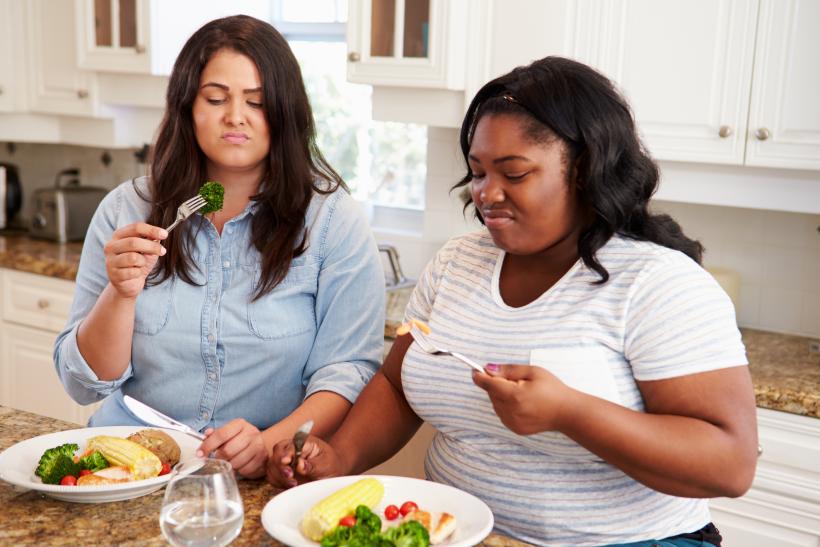 Before you even think about weight-loss, or doing something like the keto diet, you need to figure out how to live in your current body.

Ketogenic (aka Keto) diets are everything right now. Every other Instagram photo, all over the news, in books, on TV; Keto is all the rage. It hasn’t always been Keto though. Before Keto, there was Paleo (with Gluten-Free sprinkled around there). There was Atkins. South Beach. The Mediterranean Diet. The Zone. Macrobiotic. Volumetric. And so on. Even Weight Watchers could be considered a fad (though one that never seems to go out of fashion).

Ask a hundred people to define a fad diet, and you’ll probably get at least 25 different answers. Among those 25, even the folks who think they agree will likely disagree at some point along the way.

Like anything, fad diets are at least somewhat subjective. What I see as health, you see as dysfunction and vice versa. What if the diet promised weight loss, but you weren’t eating that way in an attempt to lose weight? What if the promise was more energy or better health or, in the case of Paleo, a return to the way we were “meant” to eat (I don’t know about all that; I like bread.)? What if? What a fad diet promises is a quick result.

Not as emotionally charged as Trump or abortion, but pretty emotionally charged just the same, diets have always been a hot-button topic. The way we think about our bodies, and subsequently, what we put in them, is as profoundly held a belief system as religion. Fat is bad. Thin is good. Food that is perceived to cause fatness is therefore also bad. Same for things like celery — only applied in reverse.

And size has come to be equated with morality.

Of all the things we might be in this world — mean, devious, deceitful — fat is the one that causes us the most grief. We flush billions of dollars down the drain in diet pills and "get thin quick" solutions. We spend countless hours in front of full-length mirrors. We lament. We loathe. We waste time, money, energy.

Diets that promise a quick result (usually weight loss) send red fad flags up all over.

I’ve done a number of the fads. I’ve done Weight Watchers like four times. I tried Atkins (but hated it.) I went Keto for a bit as an experiment. I ate Mediterranean — because at some point the promise of lost belly fat seemed important. I also (at different periods) ate nothing but cabbage soup, pineapple before every meal, all fruit, all veggies.

I won’t do any of them again. Why?

At least not in the long-term. You know they don’t work. Stop trying to convince yourself that this one is THE one. The cold, hard truth is, you might lose weight, even a lot of weight, but the chances it will come back are far greater than not.

And, hate to break it to you, but that first week when you think you're really taking off the pounds? That's just water weight.

2. They can actually be harmful.

I know lots of folks for whom the Keto Diet has been a literal lifesaver. And I won’t take that success from them. These folks are under the care of a physician and not using Keto as an excuse to shovel bacon in their face with a forklift.

But it is not always that way. And without long-term studies about how diets like these might impact your future health, it’s better you don’t risk it. Yes, for very overweight folks, there are good (and fast results) but we also know the lasting effects of eating lots of red meat. (See that note above about working with a care provider whenever making dramatic changes to your food intake.)

Scientific studies are hard to narrow and even harder to decipher. This will probably always be the case. There is bias; there are results that are skewed by the population studied, the area, the individual scientist.

Even as a registered nurse, I struggle with decoding the absolute excess of information.

3. If you have a history of eating disorders (or disordered eating), it can trigger a relapse.

And this isn’t something you can always anticipate. If you have restricted (either calories or food groups entirely), trying to follow a diet that only allows you to have certain foods (or groups) can send you into an unexpected downward spiral.

If you've fought hard to come out the other side of an eating disorder, celebrate that victory. Don't sabotage yourself.

4. Even if you don’t have an eating disorder, restricting foods often leads to binging.

Binging and restricting is one of the most common eating disorders, and with good reason. Tell your brain you cannot have something and guess what your brain wants? THAT VERY THING.

There is both psychology and biology behind this, and we saw it in action as far back as 1944. A group of men was recruited to engage in a restrictive diet, and guess what happened? They became obsessed with food. If you've ever told yourself, you cannot eat another Oreo as long as you live, and then end up standing in your pantry eating Oreos like the baby carrots you forced yourself to live on for six months, you know what I'm talking about.

5. Remember that behind most things is money.

Books. Special foods, flours, snacks. Diets start somewhere. They are not pulled from the ether.

The Atkins diet was started by, yep, you guessed it, a guy named Atkins. Even if you can’t trace a fad diet to a person (and you usually can), you can almost always trace its increase in popularity to a person.

Social media offers these peddlers a platform to circulate this information very quickly. That is the power of the internet, and the way something goes from an idea to a revolution.

The diet and weight loss industry makes about $60 billion a year. They do not care about you. They care about their bottom line — sending their kids to college, their house in the Hamptons, their boat, whatever, not you.

If there is someone selling the diet, be wary.

6. The weight-loss you are hoping for is not a cure for the way you feel about your body.

At my very thinnest, I was also the most miserable. Being thin did not solve all of the problems I expected it to — in fact, it solved none of them.

Before you even think about weight-loss, you need to figure out how to live in your current body. I don’t mean love it; you can’t always love it, and that’s okay. What you can (even must) do is make peace with it.

Thank it for what it’s done for you. Be grateful that when you mistreated it, it still showed up for you. Acknowledge that it keeps going every day, whether you love it or not.

Make a conscious decision to say to yourself, “I do not owe this world my beauty, my health, or my body. I live each day for me and what others think and feel about me isn’t relevant to my happiness.”

Just say it every day until you believe it. Write it on your mirror. Put a sticky note in your car, on your laptop, on your forehead (if that's what it takes). Say it out loud.

Do not let the world steal the joy you so deserve. You do not have to be thin to be joyous.

I know you might be thinking, “Okay but what if I want (or need) to lose weight.” And I hear you. I absolutely hear you. A year and a half ago, I was facing that very dilemma. My ankle was crumbling under my weight, I could barely tie my shoes. I was miserable.

But my misery wasn’t just a result of being fat. It was that, in part, yes, but under the fat, there was a lack of self-awareness, an absence of self-care, a loss of self entirely. I made some changes in my life: I got medical attention (and started meds), took all of my current meds, began intuitive eating, started going to the gym, drank lots of water, slept. The result was weight-loss. But even if I hadn’t lost any weight, I would have felt better simply because those are things that undoubtedly improve the quality of your life.

I don’t know the answers to all the questions we have about how to live in this world in a fat body, but I do know that your best chance at a healthy, happy life doesn’t involve a very specific, usually difficult to sustain, and often torturous diet. Don't waste your time or your life.