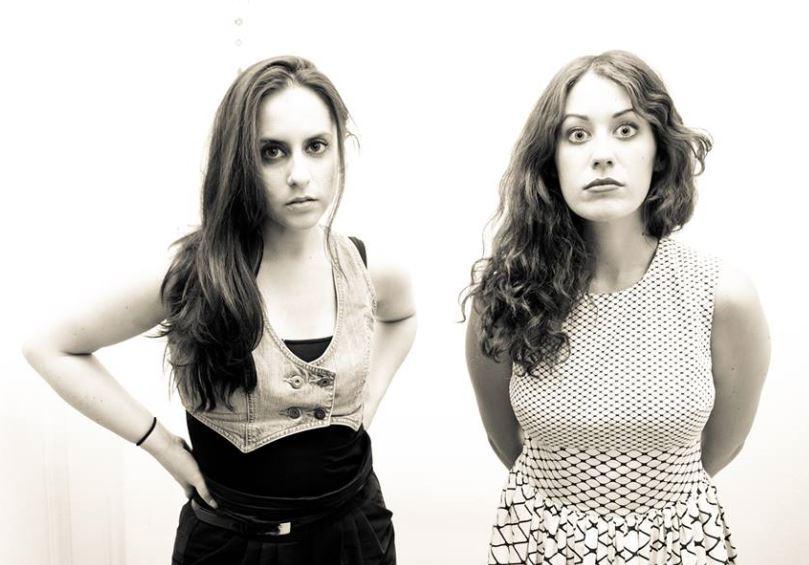 For the women behind "Guys We Fucked"—the frank and fabulous "anti-slut shaming podcast" with nearly half a million followers and counting—almost no subject is off limits. With their trademark raunchy wit, and the help of ex-lovers who guest on the show, Krsytyna Hutchinson and Corinne Fisher have dished about period sex, fetish models, big dicks and more. They've faced down flack from (mostly) men and been called "too hot for iTunes," which still won't carry their podcast. But that hasn't stopped them from doing what they do—which just so happens to be fighting for kick-ass, unapologetic female sexuality. And that makes them women we very much love.

We recently chatted with the dynamic duo about the distressing trend of slut-shaming, their personal journeys to sexual empowerment, the problem with monogamy, and what their families really think of the show.

Check out the "Guys We Fucked" podcast here (seriously, do it), and keep up with their packed stand-up comedy schedules on their Facebook and Twitter pages.

When did you launch the "Guys We Fucked" podcast, and why? What inspired it?

Hutchinson: Corinne had the idea for the show last summer and it was a concept that stuck with us. We approached Stand Up NY Labs around last September and by October we started recording. The first episode was released in December. The most important thing to us was and is to be funny and honest about our sexual experiences. We both realized that there's a huge lack of communication about sex within couples, hook-up buddies, etc. and so we wanted to take the conversations we have in our living rooms with our best friends to a larger platform. Being honest about the mistakes we make along the way is also important to share because we've found that people all over the world make similar ones and it's OK.

You call the podcast "anti slut-shaming." How prevalent do you think slut shaming is, and how are you trying to work against it?

Fisher: Slut-shaming is rampant. I think the real reason it's such an issue is because it's coming not only from society and men, but from women! If your own kind is against you . . . that should really set off an alarm. I think the key to solving any issue is by talking openly about it, even if you say some stuff that ruffles feathers (and hopefully you do). Step one is always addressing the problem head-on and thereby letting the conversation begin. For such a "free" country, America is a pretty suffocating place.

How have you learned to embrace and own your own sexuality? What lessons and struggles have you encountered on the road to personal empowerment?

Hutchinson: Honestly, I've only recently learned to embrace my own sexuality. When I lost my virginity and my mom found out, she didn't talk to me for a while and that taught me that sex was something to be ashamed of. To be clear, I was 15 dating an 18 year old. Looking back, I'm surprised she didn't call the cops. But we never had "the talk." I had to figure it out on my own and it was hard. I made a lot of mistakes and stupid decisions, but it's shaped who I am and I'm really happy that I turned out the way I did. Also, my boyfriend, Stephen, has taught me a lot. We have a form of honest communication that I've never had with another human being and it's made me such a better person/woman/girlfriend/comic.

Fisher: I have always been a really sexual person so that's been a lifelong embrace for me, but I think the podcast has helped me to be more open with my feelings. Considering I'm a performer, I'm actually a pretty closed off person in some ways. I keep a wall up. I HATE, HATE, HATE having "talks" about "relationship stuff" with boyfriends, but having former partners and boyfriends on the podcast has been very cathartic. On the negative side, it's also been a huge reminder of how not cool a lot of people are with sexually empowered women. I definitely have not been enjoying sex as much because I feel more judged. Feeling judged is awful, but particularly when it's linked to taking off your clothes and getting intimate with someone. It's a shame. But I don't regret anything I've shared.

What are some of the most provocative or controversial topics you've tackled on the podcast?

Hutchinson: Abortion, for one. It felt weird talking about it because there are such strong feelings for and against abortion that people are quick to throw in your face. I'm for a woman's right to choose. Unexpected pregnancy is something every woman fears, from the moment they begin having sex.

Fisher: For me, I think a topic that comes up a lot on the podcast is monogamy. We are raised in a culture where cheating is the grossest thing you can do and getting caught with a hooker ruins your political career. I'm not advocating going back on a promise you make to someone, I'm a very loyal person, but that being said, I would never, ever make a lifelong sexual commitment to anybody. I don't think it's possible and I don't think it's healthy. The fact that monogamy is widely accepted as the only sexual card on the table is ridiculous to me. That's like telling a kid she can be religious, but only if she's Catholic. That's not freedom. That's not what America (or any place, for that matter) should be like. For a country that so often prides itself on being "number one" and so progressive, we're really sexually backwards and it's a disservice to our people, especially our young women.

What are some criticisms you've come up against ... and how have you fought back against the critics?

Hutchinson: Some people have slammed us because sex is precious to them and they're saving sex for marriage. To that I say: if you want to save yourself for marriage because sex is that precious to you, then do it! I fully support your decision because it's your body and your choice. What I do NOT support is you coming down on people who don't do the same thing. That's another form of slut-shaming.

Fisher: We've been called whores like a zillion times. Yawn. We don't fight, we just keep doing what we do. We have a clear vision. Full steam ahead.

If you had to pick a favorite moment from the podcast thus far, what would it be?

Hutchinson: Our interview with Dan Savage is tied with the time a listener told us he listens to the show with his wife and they've been trying to get pregnant. Since they started listening to the show, he and his wife have decided to try some new things and communicate differently and are now with child! They even tweeted us a picture of the sonogram!

Fisher: Eek. This is tough! Even though it was the absolute WORST feeling, I think my on-air emotional breakdown after running into my ex was my favorite (on the "What Is Happening to My Ass?” episode). I didn't want to talk about the incident at all, but I had made a promise to myself and to the listeners to be honest, so I decided I would. I was so afraid of breaking down as I talked about it. Which I did. I was so upset that after all the time that had gone by and all the progress I had made that I was still so affected by seeing this person. But, I just talked about it honestly and let the tears come, and, ya know what? It wasn't fucking weak at all. It was real. I think the listeners appreciated it because they could tell how genuinely hard that moment was for me.

What do your parents/grandmas/ex-lovers think about all this? Any awkward stories to share?

Hutchinson: My mom doesn't know yet but it's gotten so big that I have to tell her before she finds out. I used to be nervous to tell her but now I'm kind of excited because I'm really proud of the show. All my exes who have come on the show were hesitant at first but they all ended up loving the experience and realizing how SOMEONE needs to be having this conversation. They're usually really proud to be a part of it.

Fisher:  I've very much been myself for my whole life. Both nothing and everything I do surprises everyone in my life. No awkward stories, just a lot of interesting intros as I'm brought to the stage at my stand-up shows. It's a nice ice-breaker.

If you like this article, please share it! Your clicks keep us alive!
Tags
Guys We Fucked
Sorry About Last Night
Krystyna Hutchinson
Corinne Fisher
podcast
Sex
Dan Savage
iTunes