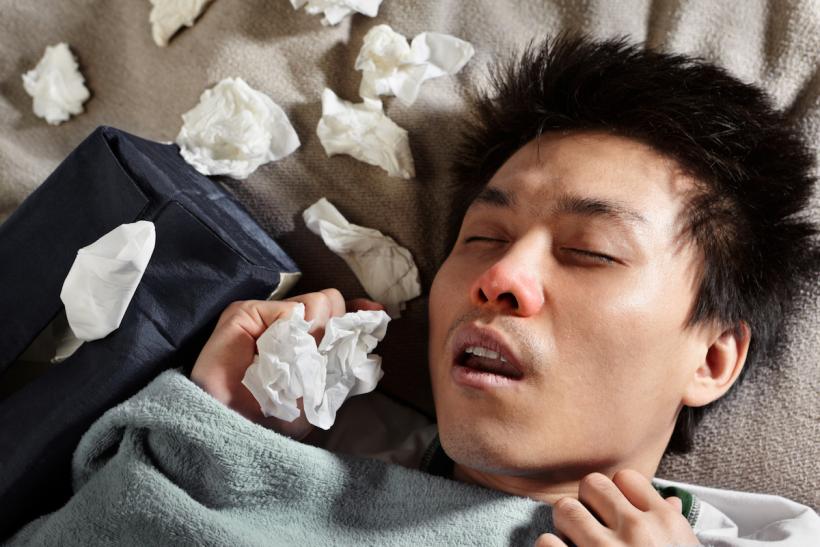 Welp, the Man-Cold is real.

Thanks to Science and the British Medical Journal, we now know that the phenomenon known as the "Man-Cold" is probably an actual real thing and not just the dudes in our lives turning up the Whine Meter to maximum whenever the sniffles strike.

That's right, the Man-Cold isn't just another example of men being SO EXTRA.

Turns out Captain Whinypant's feigned misery might be rooted in science. Studies have shown that female mice (pretty good substitutes for humans in research, turns out) have a higher immune response than their male counterparts. Looks like men overall experience more flu-related hospitalizations.

This conjures images of tiny mice with itty bitty down comforters pulled up around their necks, which is a lot cuter than a 38-year-old man periodically groaning, "I'm just sooooo sickkkk."

Regardless of what the mice might have proven, if you've ever seen a Man-Cold in full swing, you know that men do seem to have a special knack for being particularly ridiculous. If you have never had the pleasure and privilege of seeing a Man-Cold first hand, just imagine any other truly pitiful situation and then multiply it by, like, four.

The researcher responsible for this new and vital information is Kyle Sue. Sue (a man himself) set out to determine (in his own words) "whether men are wimps or just immunologically inferior.” (I mean, but do we really need science for that?) Sue compiled the results of a bunch of other studies, which all seem to point to the presence of estrogen as a primary influencing factor in the duration and severity of illness.

Are females really the stronger sex? Science has spoken.​

I made a chocolate cake from scratch while I was in labor with my fourth child, but a man with the sniffles can't manage to get his snotty Kleenex to the trash can three feet away.

This is only as important as the fact that we might chalk up dude whining to their being, well, whiny, as opposed to being genuinely sick. But let's be real, they aren't going to let that happen.

If you like this article, please share it! Your clicks keep us alive!
Tags
man-cold
sick
men
science
study
estrogen