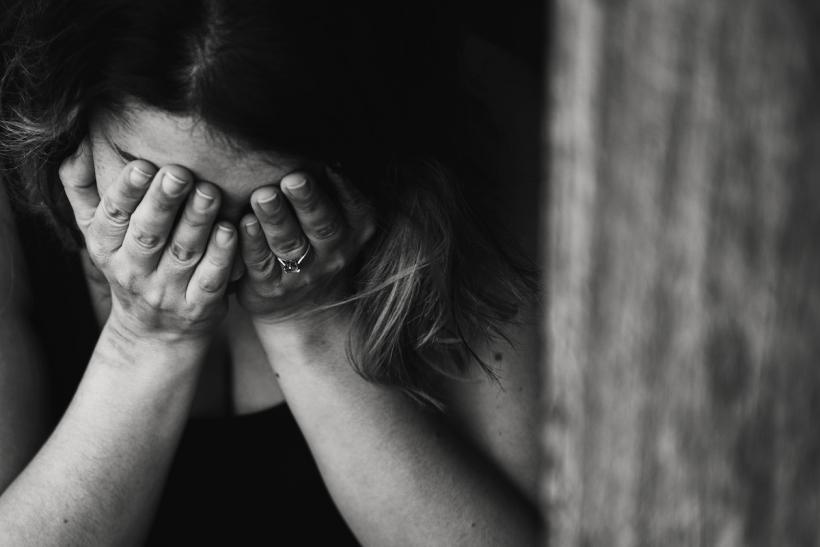 I am taking accountability and making this ugliness public so that others struggling with their own misogyny might recognize themselves and take steps to heal, too.

I am 30 — a grown married woman who recently found out she’s pregnant. It is early, still; I have just begun getting morning-afternoon-and-evening sickness. I am visiting a friend on the West Coast for Memorial Day, and for fun, we decide to watch 50 Shades Darker. In the middle of the film, a character attempts to assault a woman in his office. He corners her up against a locked door and growls, “I could make you come like nobody else has.”

Immediately, my grown ass is 15 again, and I hear these exact words out of the mouth of a 27-year-old man who is related to my father (in a very distant, through-marriage kind of way), as he grabs onto the flesh of my hip above my low-rise jeans. He is chaperoning a house party and has taken me outside for a walk and some fresh air. I drank too much. Around the corner, he pushes me up against a white garage door with his pelvis and tells me if he were my age, he’d be “lining up” to date me. His hand travels up under the cotton lace trim of my shirt and over my ribs. He tells me he could make me come like nobody else; so hard, he says, the walls would shake. His beard scratches my chin. I am 15.

It was expected that I would stretch to make room for his indiscretion, that this was our sole unique quality as women: to swallow the rage of men. This is the voice of the anger and the jealousy in my chest that whispers through gritted teeth to other women, “Don’t you know you’re worthless?”

I am 12. We are attending a graduation party in my friend’s backyard. She and I are sitting with this same man (her cousin) and his buddy. They are 24. Someone’s teacher was invited to the party, and she appears in the driveway, holding a gift. Behind her, the evening sun is low in the sky and illuminates her dress from the back, allowing us to see her slim thighs inside the sheer fabric. The older men point this out to us like panting dogs. They are excited and want us to see, too.

Later, her cousin asks me to get him a beer from the cooler and I feel him watching me bend to get one. I return with his beer, feeling important that I could complete this task for him, and with a shiftiness in his eyes, he asks me to get another one for his friend. I hear their laughter as I turn my back, and over my shoulder, I roll my eyes so they know I’m in on the joke. I know that they want to see my cleavage when I bend down, so I laugh, too.

I am 13, and I’ve just begun high school but only in fits and starts. A disastrous camping trip with my father, gaslighting behavior by my cheating first boyfriend, and the transition to my first majority-white school has left me overwhelmed, and I cut classes most days and most of the inside of my wrist. I use a nail file to carve initials into my brown skin: proof that I am here, in this body. Proof that I exist.

He sees the bandages, though, and uses it as an invitation. I would learn years later this is called grooming. He takes me aside one night after he drove my friend and me to go apple picking, to the back of her house, underneath the wooden beams of the patio deck. The only illumination is from a yellow window above us. He tells me he knows what it’s like to be my age and to be so angry at an absent (white) father. He says he used to be rebellious, too.

I cry from the moment he takes my hand in his because no man (white or not) had ever shown me that much kindness or interest. Only two months earlier, I had listened while my father cackled with his wife behind my back about how sensitive I was, how immature. “Nobody who says they’re depressed is depressed,” she said. Laying on the cold summer ground inside a shoddily-constructed tent in Maine, Marlboro Reds smoke wafting past the zippered entrance, I heard them mock my voice, mock my tears.

It meant everything for this 25-year-old man, whom I’d known since I was eight, to talk to me like a real human being who deserved to be heard. After our conversation, before we go back inside, he kisses my hand and says, “I’d hug you, too, but then I might have to go to jail.” It’s jarring — this acknowledgment of his attraction to me, his patented brand of knowingly-inappropriate flirtation, but I shrug it off and laugh. It was a joke, I think. Don’t be so sensitive. I am 13.

I am 27 and participating in a fiction writing workshop. I bring in a short story I’d written inspired by the night of the party. There are two other people of color in class (one is the instructor), and three white women. I have long identified as Puerto Rican, full stop.

When I finish reading my story aloud, the instructor is visibly annoyed. At first, I think she is angry about the man’s actions in the story. I think perhaps she is impressed with how well I’ve captured the experience of assault (or attempted assault). Instead, she opens the conversation with the following: “This story really isn’t about anything. Is it supposed to be about rape? Or I guess, attempted rape? I don’t buy it. She came onto him. She is old enough to know what she's doing at 15. This is a non-story.”

If you are conditioned to mistrust your own feelings or reactions, why would you believe another’s? I learned to model the responses of women in my life who knew about the incident and chose to keep quiet — women who asked me if I wanted to “ruin his life” by “doing anything about it.”

Some of the white women in the class take a second too long to close their open mouths. The other black person, a man, agrees with our instructor.

I am petrified that she knows. She sees through me and knows this is autobiographical and wants to punish me for it. She is shaming me for thinking I was somehow special, that I deserved to tell my story. I white-knuckle some shit about the story being polarizing when it is my turn to speak, and will myself not to cry until I get to the elevator after class. I am 15 again, caught between desire and disgust, innocence and guilt. I am 15 again, hearing the words of my friend’s older sister say, “You should have known better. You need to watch out for those Spanish girls.”

I am 29, and Donald Trump is elected President of the United States. I am possessed by a fear that is urgent and immediate. I write an essay about being harassed by Catholic white boys in my confirmation class for being Latina.

I send it to my friends at work, all women of color, all women who have banded together to fight workplace harassment and hostile environments. We had all complained daily about the torrid details of the Trump campaign. In the office, one of them speaks to me without looking.

“I read your thing.”

Her fingernails click against her keyboard, eyes trained on the screen.

“I’m so sorry you felt that way. I guess this election is bringing a lot of stuff up for some women. I wouldn’t know, that’s never happened to me.”

I can see her closing off already, only one week after the election. This is how she survives.

I am 30, and my bulging uterus wakes me up at four in the morning. I see people on social media writing #MeToo to “show men” how widespread sexual harassment and assault are. As if men are the only ones to dismiss or discredit a woman’s experience. We do this to each other. We do this to ourselves.

In the next moment, I find myself getting angry at some of the people who post. Yeah right, I think. It was probably nothing.

I think this — the woman who insists upon a four-year-old’s right not to hug anyone she doesn’t want to. The woman who prides herself on her ability to empathize and to identify danger where others don’t. I think, “How dare they claim this?” I think, “What a drama queen.” The rage is mud in my veins as I get up to shower before the sun rises.

The overhead faucet squeals on, and I recognize that this anger is not healthy or righteous. It is the cycle of internalized misogyny that I adopted to survive my own assault as a teen. It is probably the same cycle that once claimed my workshop instructor and my coworker. I am guilty of it, too.

If you are conditioned to mistrust your own feelings or reactions, why would you believe another’s? I learned to model the responses of women in my life who knew about the incident and chose to keep quiet — women who asked me if I wanted to “ruin his life” by “doing anything about it.”

Many people placed a premium on his life, but no one ever asked about mine.

It was expected that I would stretch to make room for his indiscretion, that this was our sole unique quality as women: to swallow the rage of men. This is the voice of the anger and the jealousy in my chest that whispers through gritted teeth to other women, “Don’t you know you’re worthless?”

I am 30 and trying to break this chain of abuse. I have a tiny boy growing inside of me, but the change needs to start with the broken, sensitive girl I’ve been carrying around all these years. I am taking accountability and making this ugliness public so that others struggling with their own misogyny might recognize themselves and take steps to heal, too.

Change can’t come from a social media campaign alone, but from constant personal diligence by us all: First, do we support and respect our peers, women of color, nonbinary individuals, and men who have survived these experiences? But also, and importantly, do we support and respect our own complicated journeys and survivals? Our power is our humanity. We must not let them take that, too.

If you like this article, please share it! Your clicks keep us alive!
Tags
me
too
#metoo
assault
Rape
survivor
harassment
misogyny

Me, Too: Confronting My Own Misogyny
Christine Kandic Torres

Non-Mother’s Day: How My Miscarriage Delivered Me From Secrecy
Christine Kandic Torres