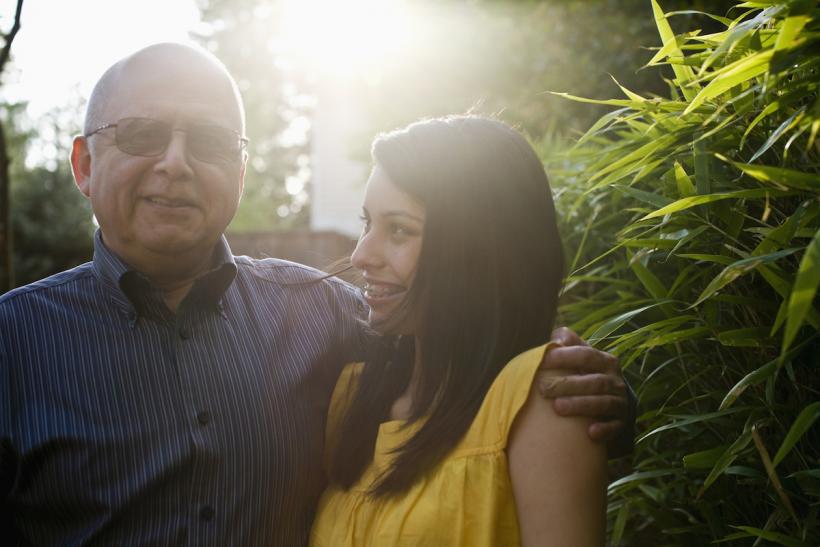 Parenting gets harder. Giving up control of our kids is an art.

I never imagined my life as a parent. Seriously, it really wasn’t even on my radar. When my wife at the time, decided she wanted kids, I shrugged my shoulders and made a commitment to do my part and get her pregnant. I didn’t think much past that point. Yet, when I heard the words, “I’m pregnant,” something changed inside me. A switch flipped. I became paternal. After our daughter was born, I couldn’t imagine anything better.

I dropped my newborn girl inside the strap up baby carrier we were given at the shower, which was like working with advanced origami, and went about my business. I tinkered around the garage, ran errands, and did whatever else was important to me in those days. Babies aren’t great conversationalists, but just having her hang with me – literally – was good enough.

My first daughter was a quiet kid. She only cried when she wanted something. She was fairly easy to soothe, and I soon became that obnoxious Wanna-see-a-picture? dad. By the second daughter, things were a little tougher. She had a temper, and a voice to drive her point home. She wasn’t afraid to use either of those things when necessary. And, of course, when offered choices A or B, she, without fail, chose C.

But the things we can control as parents slowly drift from our hands as our children grow up.

They make poor food choices when they’re with their teenage friends, wear an unsanctioned shirt to school, or worse, their grandparents’ house, and have homework we simply don’t understand. They drive too fast, share too much on social media, and make boyfriend choices that leave us wondering if they’ve learned anything from us at all. And then they’re gone.

When my oldest daughter went off to college earlier this year, I cried. It’s funny how we prepare so long for that moment and, when it finally happens, it seems like it came out of nowhere. All those years of making her school lunches abruptly stopped. Her laundry was gone. I could no longer tell her to clean her room, because she didn’t live there anymore. The problem was that I could no longer do anything.

You Might Also Like: This Is How It’s Done: Teaching My Child What I Never Learned Growing Up

Giving up control of our kids is an art. We let go too soon, they get lost. We let go too late, we cripple their ability to function independently. For example, I constantly underestimated the amount of filth my daughters were comfortable living with when it came to their bathroom. Instead of showing them how to clean it correctly, I went behind them and finished the job. My youngest daughter is now paying the price for the mistake I made with the oldest.

Being a parent, like being a star athlete, eventually requires us to leave the field. We may know the right moves, but it’s no longer our role to execute them. Instead, we can only coach from the sidelines.

The plan has been laid out, and it’s now solely up to our kids to play the game the best way they know how, using the skills we taught them.

As any coach can tell you, it’s frustrating to watch your player fumble, fall, or fail, but there’s also nothing like that euphoric feeling of success when a player reaches the goal.

A month into college my daughter called me in tears. She was away from home, had no friends, no job, and no hope that anything would change soon. My first inclination was to go get her. Of course, I quickly realized that was a stupid idea. It would be better to arrive early the next day and take her to class, so I could also bring her lunch and give her a kiss on the cheek before she went in. I’m kidding. In reality, even if there were something more practical I could have done, the beneficiary would have been me, not her. The battles she has to fight now are battles she must fight alone.

Interestingly, by the time a baby chick hatches out of its shell, the hen has incubated the egg and rotated it several times a day. As the egg reaches maturity, the hen pecks a small hole in the end so the chick can breathe. When its time to hatch, the chick pecks small holes all the way around the inside of the egg, and then spends hours pushing against it to break free. It’s mother watches and waits. Her job is done. In the end, the chick is tired and exhausted, but able to walk, see, hear, and feed itself. Intervening in that natural process can kill the chick.

Our children need to break out of their own shells. They’ve got to flex their muscles to gain strength, and find out what they are capable of doing. Sometimes they’re more surprised than we are. That’s the best part.

I still love “hanging” with my daughter when I get the chance. The dynamics of our relationship have changed, however. Instead of doing her laundry I’m paying for laundry detergent, and instead of telling her what to do, I’m learning to trust her judgment. This job is much harder than it was to slap together a peanut butter and jelly sandwich and make sure she did her homework. But being a parent is incredibly rewarding.

If you like this article, please share it! Your clicks keep us alive!
Tags
parenting
fathers
fatherhood
letting go
empty nest