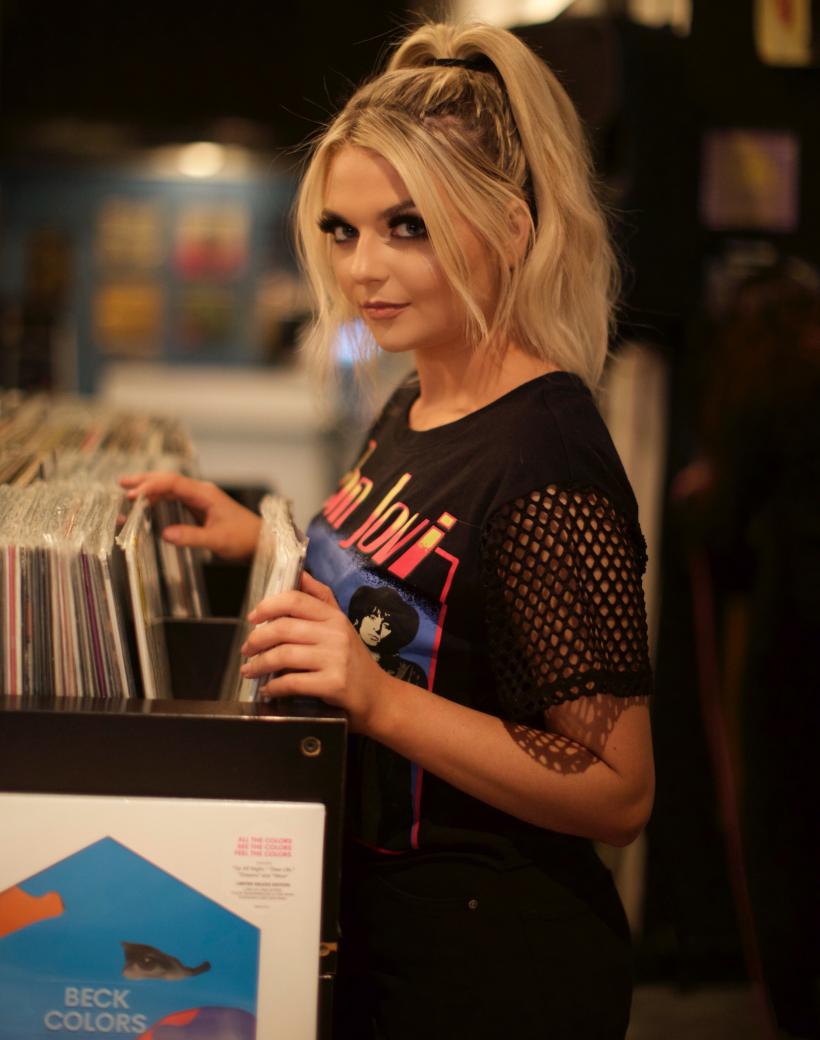 Taylor Grey is my kind of pop star.

I love everything about pop music. I love the beats, the production, the promotion. I love seeing musicians craft a "look" or even a new persona entirely. I find the communal listening that "popular" music connotes — both as the music of choice in party spaces and in its wide appeal to the world at large — to be comforting and enthralling all at the same time. What I love most about it, though, are the myriad ways individual artists twist and toy with pop's familiar conventions and tropes. Taylor Grey is one such musician.

A full-time Stanford University student studying neuroscience, Taylor has also been making music since 2013. Her music takes tableaus of teenage and early 20s girlhood (falling in love, partying, dreaming about the future), and twists them to reveal the glittering facets of complexity within both women and the sort of music they like to listen to. Her first full-length album, Space Case, was released mid-2017, and her new single "Poison" debuted at the end of November. Both reimagine common feminine narratives through infectious beats and the sort of lyrics that are just plain fun to sing along to. I don't know if there's anyone out there who wouldn't want to dance along to "Space Case," but if there is, we definitely wouldn't get along with each other.

From lyrics to sound mixing, Taylor Grey wants to be a part of every aspect of her music-making, and it shows. Her songs are deeply personal and introspective — they just happen to be catchy as hell at the same time.

I had the chance to talk with Taylor over the summer about Space Case, her musical background, and what she likes most about the songwriting process.

Be sure to listen to her music after you read our conversation, which has been edited and condensed for clarity and length.

So, let's start with talking about your music background. How did you get started? Who would you say some of your biggest influences are?

My family has never been super into music. I think we always had it on, but I'm the only one who's really passionate about it. But remember when the iPods first came out?

Yes! Back in the day!

My dad had one. And he had a couple songs on it, and "Hotel California" was one of them. I remember I would get to listen to it when he wasn't using it, so I would just, like, wait around for him not to use it. And I remember that "Hotel California" scared me! Like the lyrics to that song absolutely scared me. I listened to it under the covers. You know, the imagery of stabbing? It terrified me. But I kept listening to it because there was something about it that was so powerful. I think that was the first moment I had a really visceral reaction to music and realized how powerful it could be.

I really love that you're taking a term like “space case” that's normally thrown at teenage girls, many of whom like to listen to the kind of music that you make, as an insult. But in your song, space case is a signifier for ambition and drive and wanting more out of the world. I really like how you’re turning that idea on its head.

I was just thinking about how that term sounds really, really cool. I heard it and thought, I wanna work with that. "That space case." That sounds cool. Why is that a negative thing? That's a really cool phrase. What does this mean to me? Oh this is about someone who's dreaming. Yeah. Maybe they're not all present in their environment. But maybe they don't feel like their present environment fits them. They feel like they don't belong or they aren't understood. So what do they do? They create, they go to this alternate universe where their dreams live and breathe and they're where they belong.

I feel like a lot of teenage girls definitely have at some point in their lives felt like they don't belong in a certain environment. I know I certainly did. Everyone goes through periods like that. And the song, to me (but really it could be about whatever you want!), is about how you can create this alternate world for yourself. I really like that.

Let's talk about song writing, going from concept and lyrics to production and mixing. Because when we hear it, it's a complete thing. But singer-songwriters have this unique position of like actually being the creator of it and seeing it at different stages.

It's so cool. It's definitely a responsibility too. You want to create songs that are honest and about your life, and you also want to create songs people will like and listen to. And it's definitely a balance. Like, when I'm in my dorm room, all I have is my guitar. So I'm writing a lot of guitar-based stuff and a lot of ballads. Versus when I'm in the studio with a producer, then we can start with a beat and create a more upbeat song. And then maybe I bring songs from my guitar to my producer and we try to create something more upbeat out of a ballad. It's all about working on it, the whole process of trying to be honest and tell a story.

For example, with "Never Woulda Letcha," I walked in like "Today I definitely want to write like a full-on pop song." So I did it. For "Open Road," I was working with Dave Kuncio, who wrote "Somewhere on a Beach" for Dirks Bentley, so I came into our writing session knowing his background and he had worked with country. And I was like, "Okay, let me try to like tap into my country side," and we started writing on guitars and I wrote this really cool guitar rift and this chorus. Even being in a room with someone who I knew was country based totally changed how I approached the process.

And I bet that's cool, to be able to look at specific tracks and pin them to a time and place of when they started.

It really is. It's cool to go back. Because usually these songs happen in one day. So you can go back and pinpoint a certain time and place that you were, especially if it's a super emotional memory, like for "Impossible." I wrote that song crying on the floor of a hotel bathroom because it was, like, the day after the situation I was talking about. When I listen to that song I go back to that emotional state and my life and where I was at that point. It's definitely like a form of emotional time travel — for sure.

If you like this article, please share it! Your clicks keep us alive!
Tags
Music
musicians
Interview
pop music
pop culture