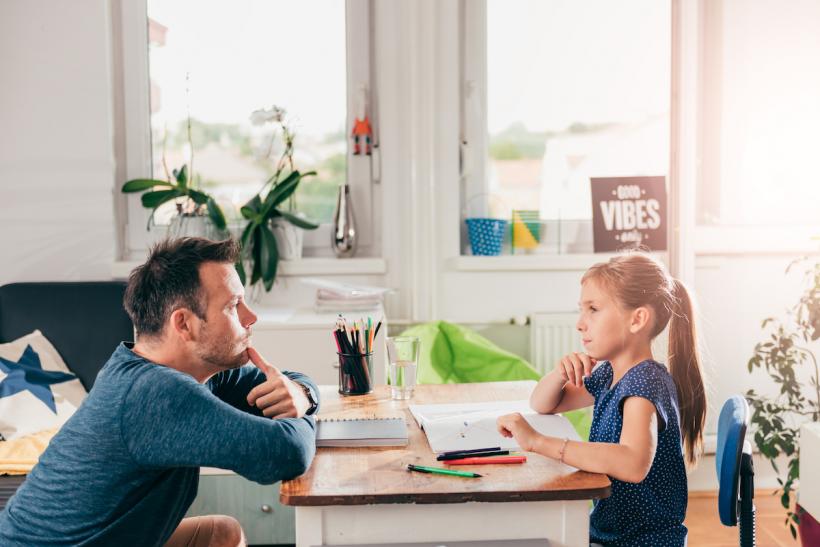 How ironic, then, that my second grader effectively predicted the election before the pundits and election nerds at The New York Times.

Like many parents, my first thought after learning Donald Trump was going to be president was what I’d tell my kids the next day.

My eight-year-old daughter was a big Hillary Clinton supporter. A year before, she innocently asked my wife, “Can a woman be president?” Yes, we assured her.

We’d forgotten in our liberal bubble how patriarchal America remains, that just because she’d grown up in the Obama era, in a house where Mom is the breadwinner and Dad works part-time and helps her with homework, takes her to piano lessons, and makes dinner, doesn’t mean sexism is dead.

In the run-up to the election, when Emily came downstairs each morning saying she was nervous, I reassured her. Like many Americans, I believed Trump’s extreme views and self-inflicted wounds — like bragging about groping women — would ultimately sink his chances. I wasn’t even that nervous on election day. That’s how confident I was Clinton would win.

How ironic, then, that my second grader effectively predicted the election before the pundits and election nerds at The New York Times. They gave Clinton an 80-90% chance of winning in the weeks leading up to the election, even after FBI Director James Comey announced the agency had reopened the investigation into her emails.

As I watched the results on election night and Nate Silver’s online predictor suddenly gave Trump a 95% chance of winning, I began shaking like I had a 104-degree fever. Unable to sleep, I listened to NPR in the dark and checked my phone for updates until it became apparent that Trump had won.

The next morning, I got up early and worked on my computer while dreading coming downstairs and seeing my kids. When I found out Trump won Ohio, where we live, by eight points, I felt a sickening thud in my stomach and thought, “Oh, this is who we are.”

Despite eight years of progress, the racist, sexist America that I grew up in wasn’t actually gone, it was just waiting in the wings.

My mom didn’t have the same choices my daughter does now. I was six when Ronald Reagan was elected president and began gutting unions, slashing the social safety net, and painting government as the problem, and my political coming-of-age was watching him on TV as my dad ate dinner on a TV tray. He came home late from work and played with us on weekends. My mom stayed home and took care of us, and that’s what was expected.

I was in college when Bill Clinton got elected, and I remember how controversial Hillary Clinton was as First Lady. She made three times what her husband did when he was governor of Arkansas and was the archetype of the successful woman, yet part of the country thought of her as “a humorless, bossy Valkyrie with a briefcase,” as the Los Angeles Times put it. “Like horse racing, Hillary-hating has become one of those national pastimes which unite the elite and the lumpen,” wrote Henry Louis Gates in the New Yorker in 1996.

I got involved after college in community organizing and loved being part of a group of people fighting for political change. That’s why it was so painful to see that power stripped away from us by the Supreme Court. When I went to bed at 2am on election night in 2000, it looked like Gore had won. I woke up to find Bush squeaked out a narrow victory in Florida, and three days later the Supreme Court stopped the recount and handed him the presidency.

After Bush’s and Clinton’s policies helped wreck the economy and spur the worst recession in three generations, Barack Obama came along and promised to create jobs, unite the country, and help the poor and struggling middle class. He promised to shift the country toward more progressive policies on the environment, health care, workers’ rights and more. Many of us believed that a new era was at hand.

The Obama years were great for us as a family. Emily was born just two weeks before his inauguration, and I loved being a dad. After losing my job in real estate during the recession, I began developing a career as a writer alongside raising a family. My wife rose up the ranks as a product manager for several companies, and we figured out how to juggle work and split parenting duties. It hasn’t been easy, but those eight years have been some of the happiest in my life.

What we didn’t know was that his presidency would bring to rise a ferocious conservative backlash that led to the Tea Party and, perhaps, Trump. Yet given that half of the country thought Obama was a) probably a Muslim, or b) a socialist, and the Republican Party was bent on tearing him limb from limb, Obama had some pretty notable successes. From the Affordable Care Act to Dodd Frank financial regulations, from gay marriage to allowing immigrant children born in this country to stay here, he converted some of his “hope” rhetoric to actual, concrete change.

Now we’re stuck with Trump, a throwback to something we never even were.

With his cheesy tough-guy swagger, he reminds me of a bad actor in a movie on TNT I wouldn’t let my kids watch. In his first month in office, Trump has managed to piss off not only the majority of Americans, but also many major world leaders, including the prime minister of Australia. Now that the Republican health care plan has gone down in flames, we can only hope he continues to be his own worst enemy and the Republican internecine war continues.

How could I tell Emily that a mean racist won the presidency by lying to the American people about terrorism, immigration, health care and more? That a man with no experience and incoherent policies won over a smart woman with the best public service resume on the planet? That someone who brags about sexual assault now has the nuclear codes?

When I saw my daughter that morning, her hair neatly pulled back and wearing her school uniform, I choked up as I started to tell her. She looked shocked and said, “What’s wrong, Daddy?”

“I’m so sorry, Emily,” I managed to squeak out. “Donald Trump won. He’s going to be the next president. Hillary Clinton should have won. I’m scared for our country.”

Emily hugged me as Nathan and Jonathan, my two boys, looked up from eating their oatmeal.

“It’s OK, Dad,” she said, squeezing me. To her, nothing about the world had fundamentally changed. She was thinking about school that day. About the latest pop song by Adele (the Kidzbop version with the inappropriate words scrubbed clean). About practicing for her piano lesson.

As she kissed me goodbye, I felt buoyed up her optimism and the realization that while this jerk would be in power for a few years, sooner or later, people like Emily would be in charge.

Raising A Daughter In The Era Of Trump
Lee Chilcote