Why Is Etsy Banning These Rad Period-Themed Accessories? 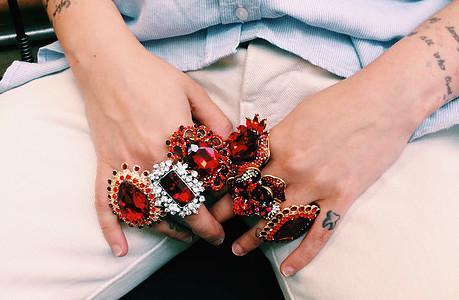 Periods happen. They just do. This is neither a good thing nor a bad thing. It’s just a thing. Like how hunger happens, or or a sneeze happens. It’s a body thing that… happens.

Unfortunately, periods happen in the vagina and, as we have all been told, vaginas are a source of deep, deep shame and no one wants to admit they exist unless they’re being presented as avenues of pleasure for the male gaze. The part of the vagina life-cycle that deals with periods is supposed to be a dark, Illuminati-level secret.

Or you could celebrate your period with cool, sparkly jewelry designed by 23-year-old British jewelry designer Lili Murphy-Johnson. Murphy-Johnson has a line of pieces that celebrate periods in clever ways. There’s the pink-stone-encrusted cocktail ring in the shape of a maxi-pad. A series of blood-red rings that she photographed on hands dangling suggestively near the model’s crotch. Oh! And fantastic beadwork, irregularly shaped, in tiny red crystals, sewn near the back hem of a long shirt. It looks like the most glam bloodstain ever.

Teen Vogue reports that, up until last week, you could buy this stuff on Etsy — but Etsy decided to suspend Murphy-Johnson’s store because she didn’t “follow our policies for mature content and prohibited items.”

There’s no word on when or if Murphy-Johnson will get her shop back. A shame, because some of those rings would look gorgeous on my hands.