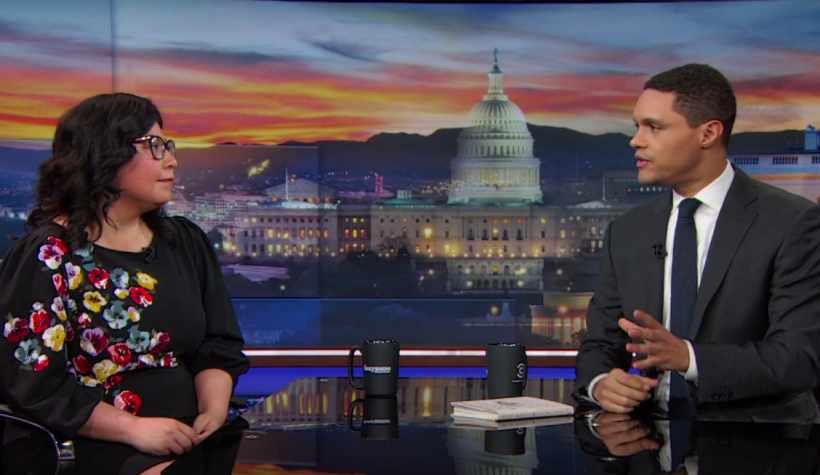 Terese Mailhot on The Daily Show

I have a card from a counselor with kind words on the back: “Terese — you are truly amazing at being you. I hope you continue to travel this journey.”

The words were earned and affirming. In the group therapy program she led, I was full of self-doubt and self-criticism. There was a day when she asked me why I seemed distant, and I told her it was because I wanted to sit by the window, but I didn’t want her to think if I sat by the window and looked out too much that I was being dissociative. She was slack-jawed.

She couldn’t believe I thought that deeply about something as simple as sitting by a window. I explained to her that I had become hypervigilant because social workers, caseworkers, and therapists throughout my life had analyzed me to the point where I felt like I had to exhibit healthy behaviors, or behaviors one might deem healthy, at all times.

As a youth, I was labeled high-risk by social workers and youth workers. As a young mother, social workers were always interested in what I was doing, and often used my history as a foster kid as proof I didn’t know how to be a mother. I had to prove to them, and to myself, that I could be a well-rounded person. I did this by taking parenting classes, working several jobs, and eventually pursuing an education.

I still feel the threat of judgment and assessment — that’s what the system can do to someone who lived underneath it most of her life.

I told my counselor about the time a foster family accused me of stealing money. They told me they had video footage of me doing it from a hidden camera. I knew I didn’t steal, so I asked to see the footage. The foster mother didn’t provide it. The foster mother reported to my social worker that I stole things. I disputed the claim, but nobody believed me. To this day, I don’t know why the foster parent was playing mental games with me, but she worked me like a dog and seemed to delight in cruelties against me.

After I told this story, I explained to the group counselor that whenever we take breaks for group, I make sure I’m the first to leave the room, and that I only enter the room when there are several people there as witnesses, so that in case something goes missing I can prove it wasn’t me. I also take note of whose bags are left in the room, and who’s in the room with me. My therapist felt bad for me and told me that I needed to let go of those experiences and be myself. I couldn’t imagine a self who wasn’t scared of being called a liar, or a thief, or dysfunctional.

“If you want to sit by the window, you sit by it!” she said.

I sat by it. It was cold, and I immediately regretted it. I spent most of the day thinking about moving back to the other seat, but I was afraid she’d consider me fickle or odd.

Every day since that moment has been a practice in trying to be myself, away from a system that burdened me.

The system never helped me. None of their financial support was worth the judgment or dehumanization, and many people where I’m from still experience this type of discrimination. Stigma is more than shame or a shadow; it’s an anxious feeling. I believe it created an anxiety disorder in me. At thirty-five, after doing a lot of work on myself, I sit where I want.. I am pulling myself out of the dark in many ways, and I can’t help but think about a story I read that said most kids in the foster care where I’m from are Aboriginal.

I fear that what I experienced is still being done to children and youth, and the impact is lasting. What happened to me has impacted how I view myself, how I parent, how I trust, and how I move in the world.

As I continue to work on myself, I think forward.

Sharing this story with people who have been in the system should help make them feel less alone. Sharing this story with social workers should give them something to consider when they label a child or youth “high-risk,” or hear a child’s story. I’m not under the thumb of anyone’s criticism anymore, or beholden to any social assistance, and that kind of freedom is hard to describe.

Every day I look at my counselor’s card and tell myself to sit wherever I want. I wish that for everybody.