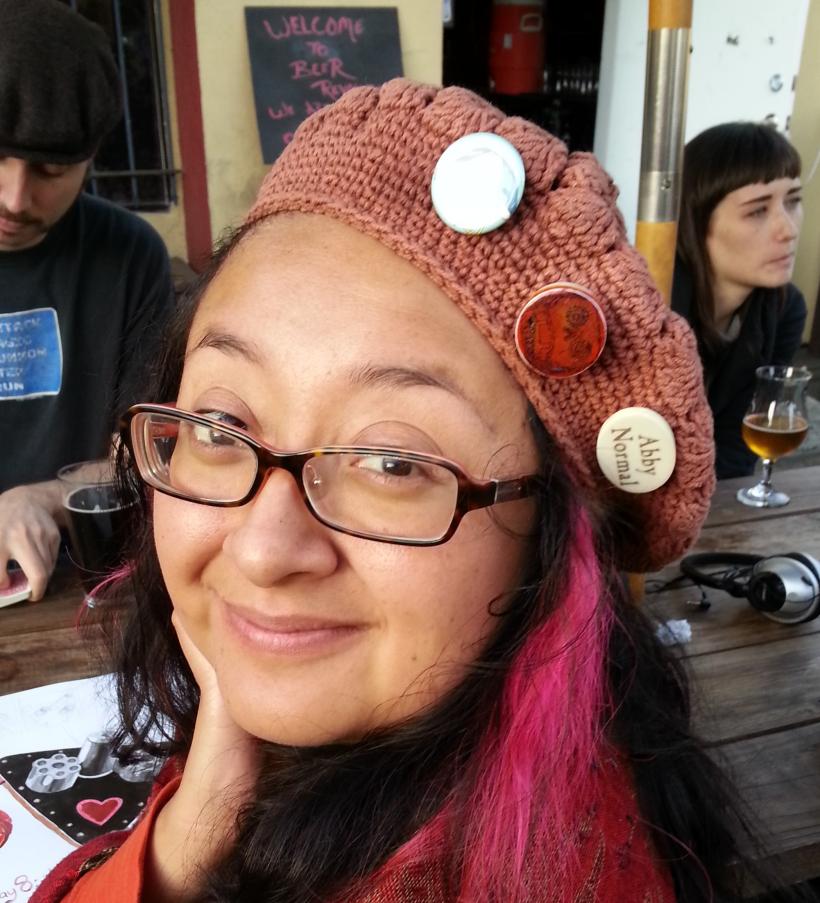 Occupation: Illustrator and student at California College of the Arts (CCA)

What are you drawing?

I'm working on the 30-day challenge and this is day nine. We're supposed to do a doll, so I'm drawing a voodoo doll.

A 30-day challenge of what?

Of drawing. It's a tumblr thing; you get a list of 30 days of drawing subjects.

Are you an artist?

Yes! I am. I'm an illustrator. It's going to be my last semester at CCA and I'm really excited.

What's your favorite thing to draw?

Weird and quirky little things. I'll show what I did yesterday. It's a crotch gun for women.

Well, Robert Rodriguez's film, Dusk Before Dawn. There's a character named 'Sex Machine' and he has a secret weapon—and it's a gun! I thought, 'Would that be cool for us girls?' So I just drew that because the topic for day eight was hidden weapons.

What made you want to do a 'for her' weapon?

It's just not fair that boys have all the fun toys. So this one is leather and red and has little hearts.

I like that fairness notion. Would you identify as feminist?

I think so. Definitely.

What does that mean to you?

That means—as opposed to all the tumblr feminists out there—not "only women can be amazing" but equal representation for both sexes.

Ravishly definitely agrees with that! Tell me about your hat, especially that 'Abby Normal' pin.

Its a quote from Young Frankenstein, and my name is Abby, so yeah.

Cool, what about your other pins?

The Jackolantern: This is done by another artist, actually my boyfriend's mother, who does textiles. She did this out of a little game piece.

The bird: It's a night heron from Lake Merritt. They're pretty cool birds.

Why did you put pink in your hair?

Because there was no red. I'm not a fan of pink in general but it looks good with me in the summer, on my skin, because I'm a brown person.

What about your rings?

This is an opal ring. It was found on the ground while I was walking. It's real silver from Mexico. Its beautiful. I love it.

This is another ring that was found. [It's on your ring finger.] It is! My boyfriend gave it to me. I guess it's a 'promise ring,' or protection from unwanted attention.

And your necklace is super cute! Where did you get it?

This is from the same artist that made this pin: my [boyfriend's] mom. She also works with polymer clay. She buffs it and puts in color and makes little jewelry, and necklaces, and all sorts of good stuff.

You're drinking mead! Why choose mead when you have so many options?

I am! How could you tell? [I had mead earlier] It's good, isn't it? It was bought for me because he knows that I love mead.

This is your boyfriend?

This is my boyfriend. [Signals to man playing solitare, using powers of 10.]

A little, but he's a math guy. He's an architect, so I guess it comes from all those figures.

Wow. An artist and an architect?

Yeah! It works really well, he helps me with perspective, and I help him with his people drawing.

Your scarf is beautiful!

Thanks, it's from Italy. They went on a family trip and brought me back a gift.

Your boyfriend went to Italy?

No, his parents did. I consider them my family now.

How long have you guys been together?

February will be eight years!

Who asked who out?

That's a good question. It just kind of happened.

How did you meet?

Online. Not on a dating website—on an art appreciation website. 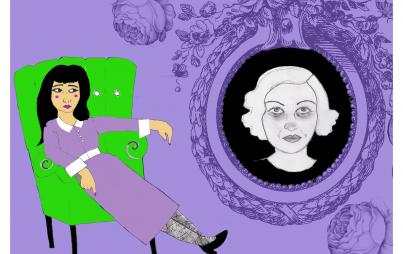 Ask Erin: I Can't Stop Comparing Myself To My Mother-In-Law