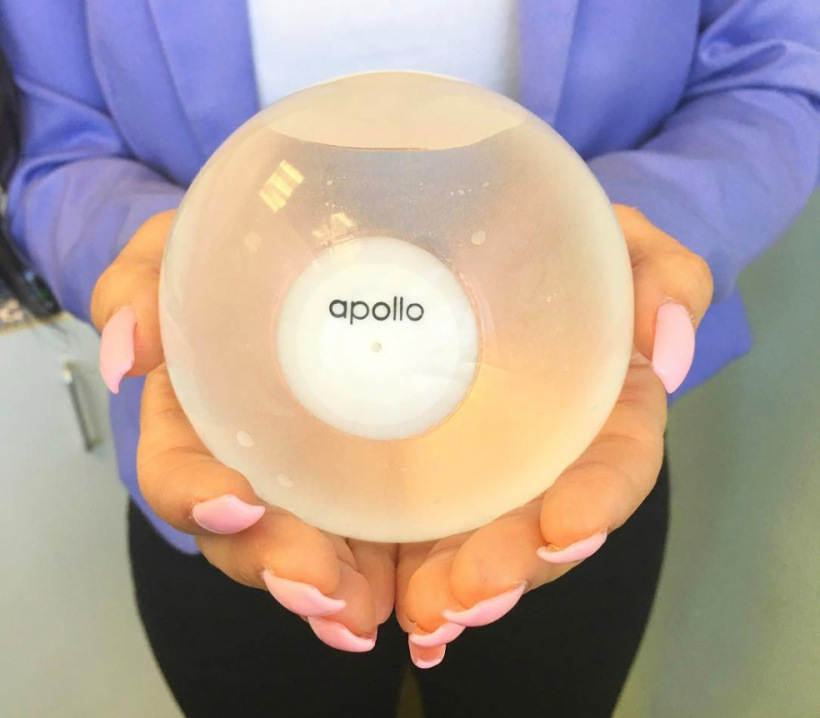 They aren’t thin, they are dead, and that’s nothing to shrug off. (Image Credit: Instagram/california_smartlipo)

A few months ago I wrote a blog post called “They Want Fat People to Swallow Balloons Now.” In the post, I talked about a fairly new “weight loss” method in which doctors place balloons into people’s stomachs and then fill them with saline. I pointed out that, according to their own literature, in addition to dangerous and miserable side effects, there are at least a couple of ways that it can kill you:

• Death due to complications related to gastric or esophageal perforation is possible.

• Death due to complications related to intestinal obstruction is possible.

While it didn’t really take a psychic to figure out what was going to happen, I still hoped that I was wrong on this one. Heartbreakingly, I was not.

The FDA reports that five people died within a month of having the procedure, and three of the victims died within just three days. According to a safety alert from the FDA, they also received reports of two additional deaths — one from gastric perforation, the other from esophageal perforation.

According to their statement:

“The FDA continues to work with Apollo Endo-Surgery and ReShape Medical Inc. to better understand the issue of unanticipated death, and to monitor the potential complications of acute pancreatitis and spontaneous over-inflation. Additionally, as part of the ongoing, FDA-mandated post-approval studies for these devices, we will obtain more information to help assess the continued safety and effectiveness of these approved medical devices.”

Note that they aren’t going to ban the practice (thus ending the unanticipated deaths), but rather they hope to better understand the unanticipated deaths. I would point out that, based on the manufacturer’s own warning labels, they knew the risk of these deaths before they happened. Even if we are OK with them feigning ignorance on that, at this point future deaths should be considered "anticipated" — more causalities in the “War on Obesity” which wants us thin or dead and doesn’t seem to care which.

I blame the sizeist culture that pushes fat people to attempt to solve social stigma through weight loss attempts. I blame the manufacturers who create these dangerous products to profit from sizeism. And I blame the FDA for approving them.

For their part, the manufacturers seem to be suggesting that since the deaths represent a small percentage of the fat people whose lives they risk, they are somehow acceptable. Of course. Anyone who would think it was a good idea to have fat people swallow balloons probably thinks it’s OK to kill some fat people.

But the truth is that real people are dead — people who could have gone on to live wonderful lives, people whose parents lost a child, whose children lost a parent, whose communities lost a valuable member. They aren’t thin, they are dead, and that’s nothing to shrug off.

I’m not OK with killing any fat people in the pursuit of making us thin. I don’t blame fat people, who are duped into procedures like this by a fatphobic world that tells them their bodies are to blame for everything wrong in their life, and suggests that weight loss is possible when, in fact, attempts at weight loss almost never work. As I noted in my blog post, the average participant lost 21.8 pounds in the six months they spent having adverse side effects (that, luckily, didn’t kill them) from a balloon or two floating around in their stomachs.

But six months later, our balloon swallowers had regained 5.6 pounds (25.69%) of the weight that they lost in the first six months which puts them right on track to have gained back all of their weight (with some likely regaining more than they lost) within five years. Of course, like almost all weight loss studies, they simply stopped following the subjects and pretended that they would not experience any more weight gain.

I don’t blame the victims. I blame the sizeist culture that pushes fat people to attempt to solve social stigma through weight loss attempts. I blame the manufacturers who create these dangerous products to profit from sizeism. And I blame the FDA for approving them.

It’s important to remember that these things get FDA approval based on a risk/benefit analysis, which means that the higher the risk is believed to be, the more dangerous the treatment is allowed to be. Since our fatphobic culture wildly overestimates the risks of being fat, companies are allowed to suggest extremely dangerous “treatments.” (They are currently suggesting that fat people risk death and a lifetime of horrific side effects by submitting to the mutilating of our stomachs and digestive tracts.)

It’s no wonder that in a world where fatphobia runs rampant and even concepts of “Body Positivity” all too often come with baked-in sizeism, healthism, and ableism, the FDA would decide it’s perfectly reasonable to risk the death of fat people.

Rather than focus on creating an environment where people of all sizes can thrive.

As long as the medical community is allowed to make a profit from the promise of thinness, fat people cannot trust them to have our best interests (or even just our continuing to be alive) as a priority. I know exactly where to stick these balloons, and it’s not in the stomachs of fat people.

If you like this article, please share it! Your clicks keep us alive!
Tags
fat positive
Body Positive
weight loss
weight loss surgery