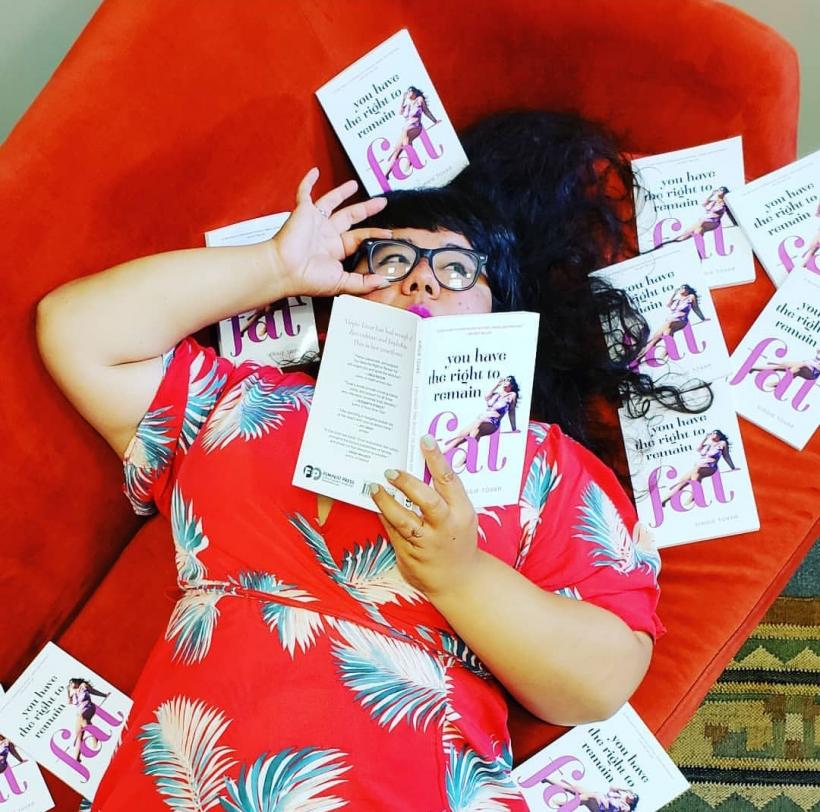 A lot of people don’t know this, but fat activism has been around in the United States since the 1960s. Yes, it’s true!

The ideas of “fat pride” and “fat acceptance” were promoted by NAAFA (National Association to Advance Fat Acceptance), which was founded in 1969 by Bill Fabrey. By 1972/1973, a conversation had begun that went farther than acceptance and advocated for something more radical - fat liberation. The idea was pioneered by two women who had come out of the Radical Therapy Movement, Sara Fishman and Judy Freespirit. They began as a chapter of NAAFA with six members, but when they were asked to tone down their feminist messaging by NAAFA leadership, they quit and created the Fat Underground.

Fishman described the emergence of the Fat Underground from the Radical Therapy Movement in a 1998 article written for Radiance Magazine:

“Conventional psychotherapy places the burden of change on the ‘maladjusted’ individual; radical therapists condemned this as a ‘blame-the-victim’ approach. ‘Change society, not ourselves,’ they urged… A major concept of Radical Therapy is that oppression goes unchallenged if it is ‘mystified.’ That is, its true nature is concealed. The oppressors do not say to the victims, ‘We will torture you until you submit to our will.’ Rather, they say (and often believe), ‘This treatment may seem painful or unfair, but it is for your own good.’ An example would be the practice of ‘protecting’ women from sexual harassment by denying them access to education or employment in predominantly male fields. The Fat Underground viewed medical weight-loss treatments as a form of mystified oppression.”

Fishman wrote that she was deeply impacted by reading Llewellyn Louderback’s book, Fat Power (Hawthorne Books, 1970). Though it lacked political analysis, it contained well-established medical research that pointed to the facts that (1) fat and thin people eat similar amounts of food, (2) restriction works less than one percent of the time longitudinally, and (3) in places where there isn’t fat-negative discrimination, fat people don’t have increased risk of heart attack.

Louderback’s book became the scientific basis of the argument to end fat medicalization, and the tenets of Radical Therapy became the framework for the social critique of weight-based stigma. A new movement was born. Early fat liberation ideology, further, had roots in Jewish lesbian politics (for a long time, fatness was considered a uniquely Jewish issue; my boy Sander Gilman has written all about this).

I returned to the Fat Liberation Manifesto recently to remind myself of what my political ancestors envisioned. And I wanted to share it with you:

by Judy Freespirit and Aldebaran

1. WE believe that fat people are fully entitled to human respect and recognition.

2. WE are angry at mistreatment by commercial and sexist interests. These have exploited our bodies as objects of ridicule, thereby creating an immensely profitable market selling the false promise of avoidance of, or relief from, that ridicule.

3. WE see our struggle as allied with the struggles of other oppressed groups against classism, racism, sexism, ageism, financial exploitation, imperialism and the like.

4. WE demand equal rights for fat people in all aspects of life, as promised in the Constitution of the United States. We demand equal access to goods and services in the public domain, and an end to discrimination against us in the areas of employment, education, public facilities and health services.

WE demand that they take responsibility for their false claims, acknowledge that their products are harmful to the public health, and publish long-term studies proving any statistical efficacy of their products. We make this demand knowing that over 99% of all weight loss programs, when evaluated over a five-year period, fail utterly, and also knowing the extreme proven harmfulness of frequent large changes in weight.

6. WE repudiate the mystified “science” which falsely claims that we are unfit. It has both caused and upheld discrimination against us, in collusion with the financial interests of insurance companies, the fashion and garment industries, reducing industries, the food and drug industries, and the medical and psychiatric establishment.

7. WE refuse to be subjugated to the interests of our enemies. We fully intend to reclaim power over our bodies and our lives. We commit ourselves to pursue these goals together.

FAT PEOPLE OF THE WORLD, UNITE! YOU HAVE NOTHING TO LOSE …

Forty-six years ago the Fat Underground could not have imagined the extraordinary impact that fat people all over the world are having right now. Conversely, this document is the evidence that the medical industry and mainstream culture have made shockingly few strides in their overall attitudes and treatment of fat people. It makes reasonable demands (the one asking diet companies to publish empirical studies that prove the efficacy of their products was my favorite) that still seem radical today. What I truly treasure, however, about the Fat Liberation Manifesto is that it directs us to reimagine that fat people can demand more than acceptance or assimilation, and provides the language for making that demand anew.